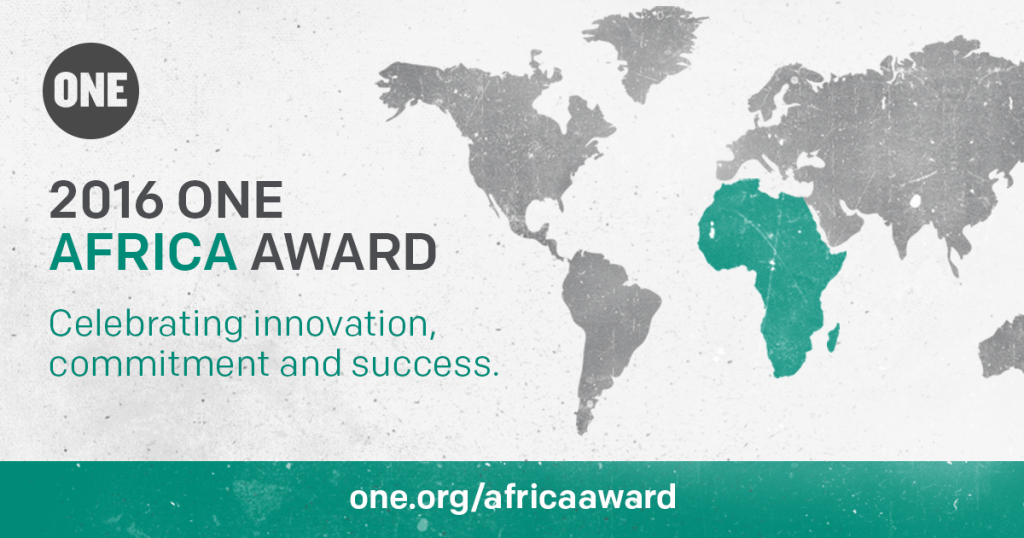 JOHANNESBURG, South Africa – The ONE Campaign is announcing the opening of applications for the 2016 ONE Africa Award. This year marks the ninth anniversary of this award that honours outstanding African organisations leading the fight against poverty and preventable disease on the continent. Nominations and applications for the award, whose recipient will receive up to $100,000 USD in prize money, will close on November 25, 2016.

The Award highlights the dynamism and achievements of African individuals and organisations that are building a better future for their communities, countries and continent. It celebrates and bolsters innovative, African-led and African-driven advocacy efforts that help advance one or more of the Sustainable Development Goals (SDGs), the world’s current blueprint for fighting extreme poverty and disease.

Civil society organisations, non-governmental organisations and other groups based in Africa that can demonstrate commitment and success in advocacy to promote the attainment of one or more of the SDGs should apply. ONE acknowledges and applauds the progress made by these organisations, and looks forward to the solutions for the challenges still ahead.

“The 2016 ONE Africa Award not only comes at a time when we are mapping new roads to ensure a better world for all by 2030. It is happening at a critical time when we have seen numerous global challenges ranging from famine, civil unrest, and rising income inequality dominating African headlines. This is because our continent still carries a disproportionate share of these challenges. If not confronted by bold and innovative actions, these challenges will thwart the ambitions we have to consign extreme poverty to the history books by 2030. It is, for this reason, I am delighted to invite eligible African organisations to apply for the 2016 ONE Africa Award.”

SWAGEN Executive Director Gertrude Kenyangi and 2015 winner of the Award said: “The ONE Award is a symbol of recognition and encouragement for us; we’re honoured to have our contributions in the fight against poverty in our communities appreciated. The 2015 ONE Africa award recognised more than ten years of SWAGEN’s work with women in agriculture working together to improve their livelihood while bridging the gap between international organisations and grassroots initiatives. The award has made the impossible possible for our organisation; we have managed to build a computer centre where women in the community can use it to access the information they need. Access to information on the internet has changed women’s lives. I would thus advise as many organisations to apply for this award as it has opened up opportunities for us, helping the sustainability and continuity of the organisation.”

For more details on the ONE Africa Award and full scoring criteria for applicants, visit www.one.org/africa/the-one-africa-award/

Nachilala Nkombo and previous recipients of the ONE Africa Award are available for interviews – please contact Mbali Zwane ([email protected], +27 11 706 4511 ) for media enquiries.

Individuals and organisations, based in Africa, that demonstrate innovative approaches and measurable results in helping to meet one or more of the Millennium Development Goals through advocacy are invited to apply.

Applications can be sent to The ONE Award by email to [email protected] or delivered to ONE Africa Offices at the following address:

Announcement of the Winner

ONE is a strictly nonpartisan campaigning and advocacy organisation of more than seven million people around the world taking action to end extreme poverty and preventable disease in Africa. Whether lobbying political leaders in world capitals or running cutting-edge grassroots campaigns, ONE pressure governments to do more to fight AIDS and other preventable, treatable diseases in the poorest places on the planet, to empower smallholder farmers, to expand access to energy, and to combat corruption so governments are accountable to their citizens.

ONE Africa has led strong campaigns on the African continent that included but is not limited to agriculture transformation and women’s empowerment through its Do Agric and Poverty Is Sexist campaigns. The organisation is currently its mobilising grassroots and influential Nigerians to call on the government to the federal government to boost health sector investments under its Make Naija Stronger campaign.