To see a brighter future, young activists know that they can’t wait until tomorrow to start changing the world. Action has to happen now. In South Africa specifically, seven young girls are doing just that. Through education, climate action, and action against gender-based violence, these girls prove no one is too young to start changing the world.

On this International Day of the Girl, here’s a closer look at their activism.

On empowering girls through education

The afternoon sun shines brightly on Ingrid Xhameni and Enersh Nale, two 13-year-old girls on their way home from school. Their backpacks hang heavy on their shoulders with books and homework. Standing beside a mural that reads “every hero was once a child with a dream,” these two 8th graders aren’t shy about their dreams and visions for the future. 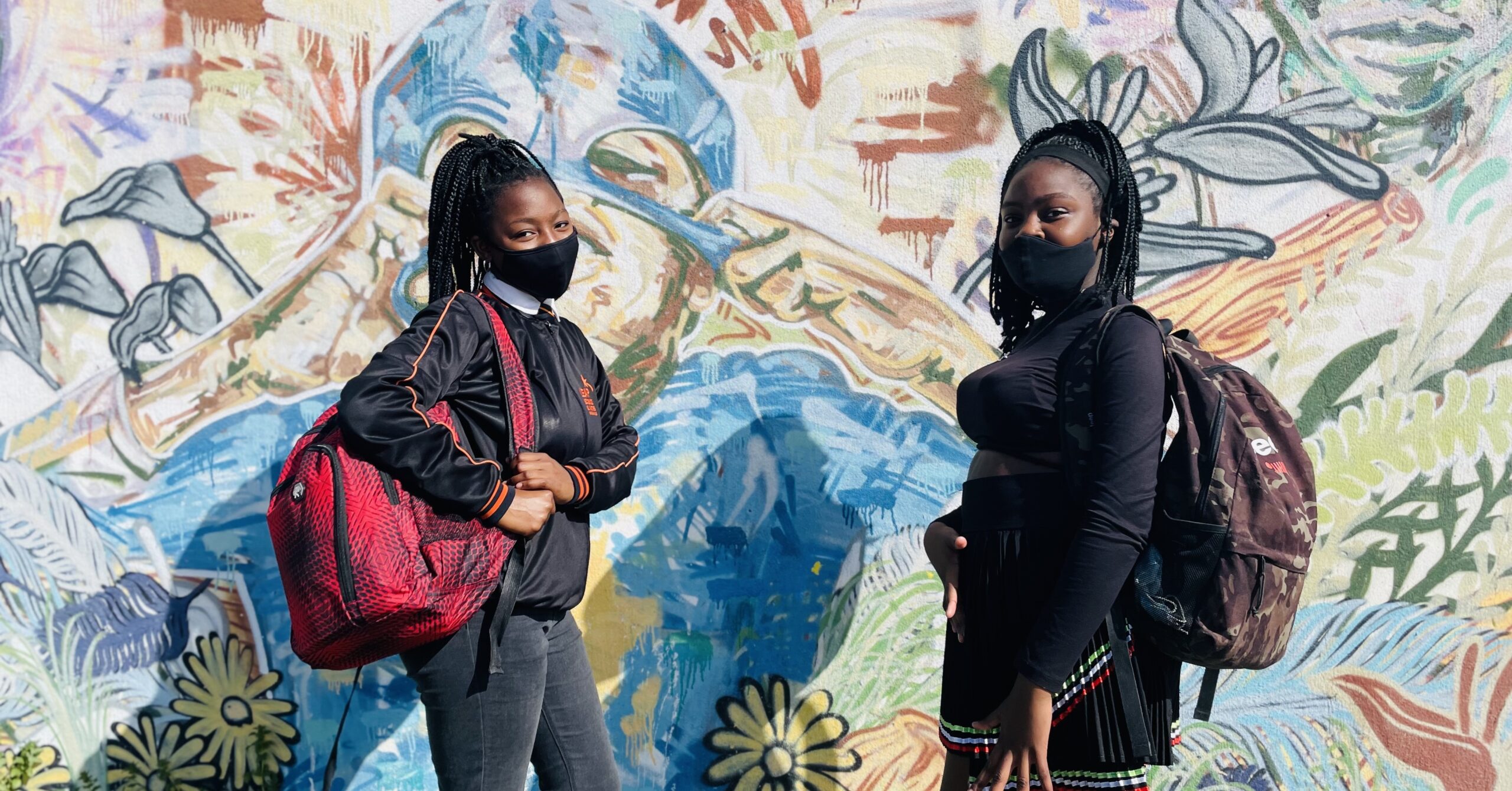 Ingrid and Enersh are part of a STEM program in Langa called iThuba Innovation Hub. iThuba means opportunities in isiXhosa, and it’s just what girls like Ingrid and Enersh haven’t had enough of. They just started their first year at LEAP Science and Maths School.

“Being a part of LEAP Science and Maths Schools has empowered me a lot,” Ingrid said. With LEAP’s strict structure and competitive academics, she said she’s training for university.

In a country where the grade 12 pass rate is 51.6% for black students, LEAP has a 93% pass rate for all students, and over 70% of their students pursue higher education. After the pandemic started, the number of students not attending school tripled, hitting the lowest attendance rate in 20 years.

Both girls come from a community with a 40% unemployment rate. Only 40% of the population has completed grade 12 or higher.

But these two have achieved something that no one from their school has before — they are the first students to be accepted into LEAP. LEAP has 40 spots each year and receives hundreds of applicants from across Cape Town, many from communities more privileged than Ingrid’s and Enersh’s. LEAP is giving these two girls the opportunities and resources they need to feel empowered and inspire others. And they have some encouragement for other young girls. 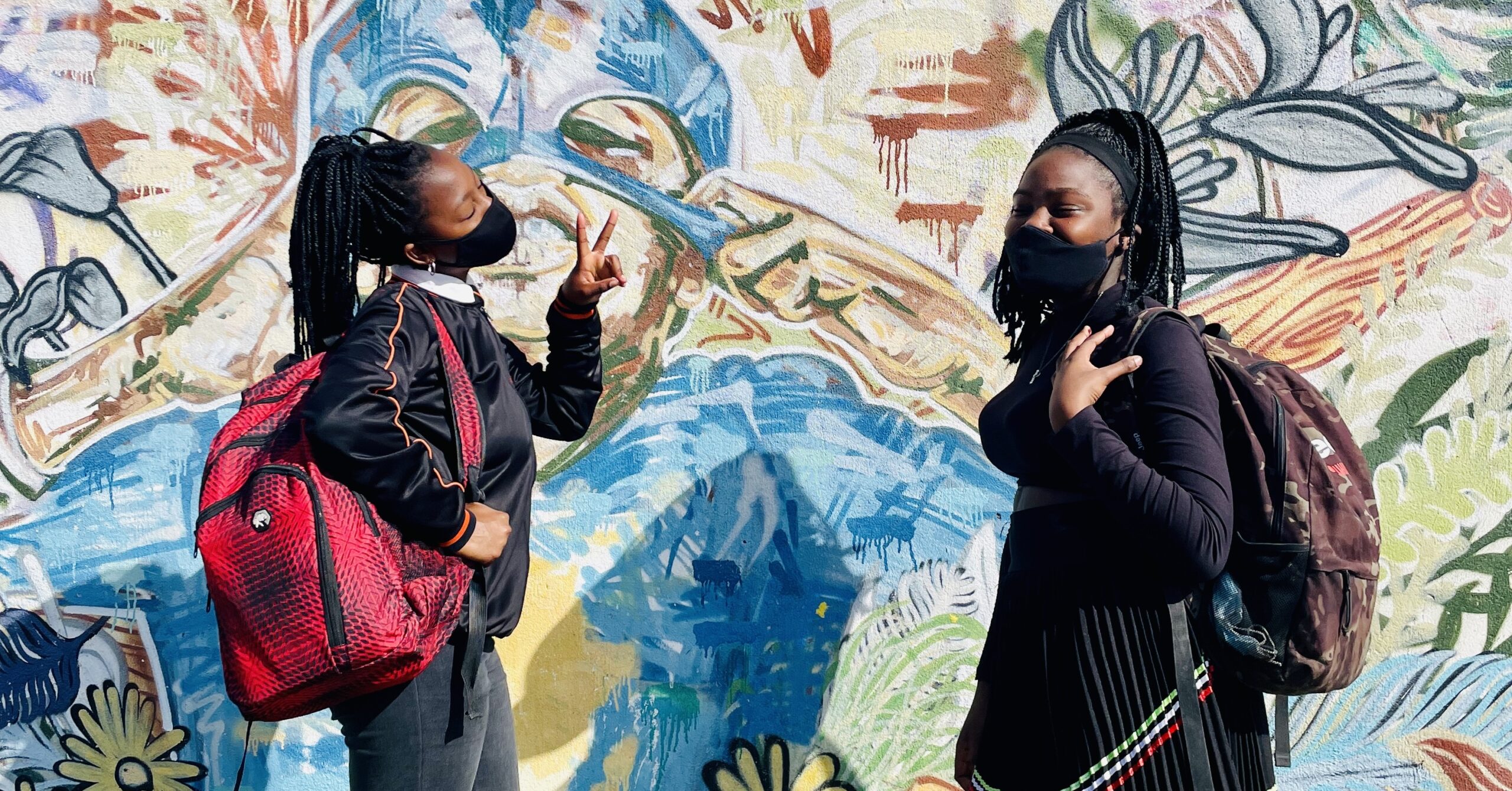 “Do not give up. Believe in yourself. Tell yourself that you can do that. You are worth it. Tell yourself that there is nothing that you can’t do,” Ingrid shared. “Remember why you are in school — because you want to be someone one day. You have dreams. You have goals that you need to achieve, so you must study hard, believe in yourself, don’t give up, and you will have a better future.”

Enersh hopes that girls in the future “get the chance to speak out, that they are recognized as girls; that girls can do anything and are valued as women that have rights.” Enersh dreams of launching her own app to unite students across South Africa in equal access to e-learning.

Both girls want to be role models, to share their stories, and to start a motivation group to encourage other girls from Langa to feel as empowered as they are. “Motivation groups are very rare here in my township,” Ingrid said.
“Girls have the power to speak up and stand for what’s right and what’s wrong,” Enersh added. “As a girl, you have the power to stand up.”

On standing up against gender-based violence

In nearby Nyanga and Bonteheuwel, 17-year-old Nashieka, 20-year-old Mihlali, 12-year-old Inam, and 14-year-old Anelisa are growing up in one of the world’s most dangerous countries for women. In South Africa, more than half of all girls will experience some form of gender-based violence at least once in their lives. Nyanga is consistently ranked the murder capital of South Africa, with a murder rate of 15.2 murders for every 100,000 women.

But these girls at The Justice Desk’s Mbokodo Club are fighting to change that. Here, young survivors and witnesses of gender-based violence between the ages of 9 and 21 learn to prioritize their mental health, how to defend themselves, and the tools necessary to be empowered leaders. And these skills have proven useful. 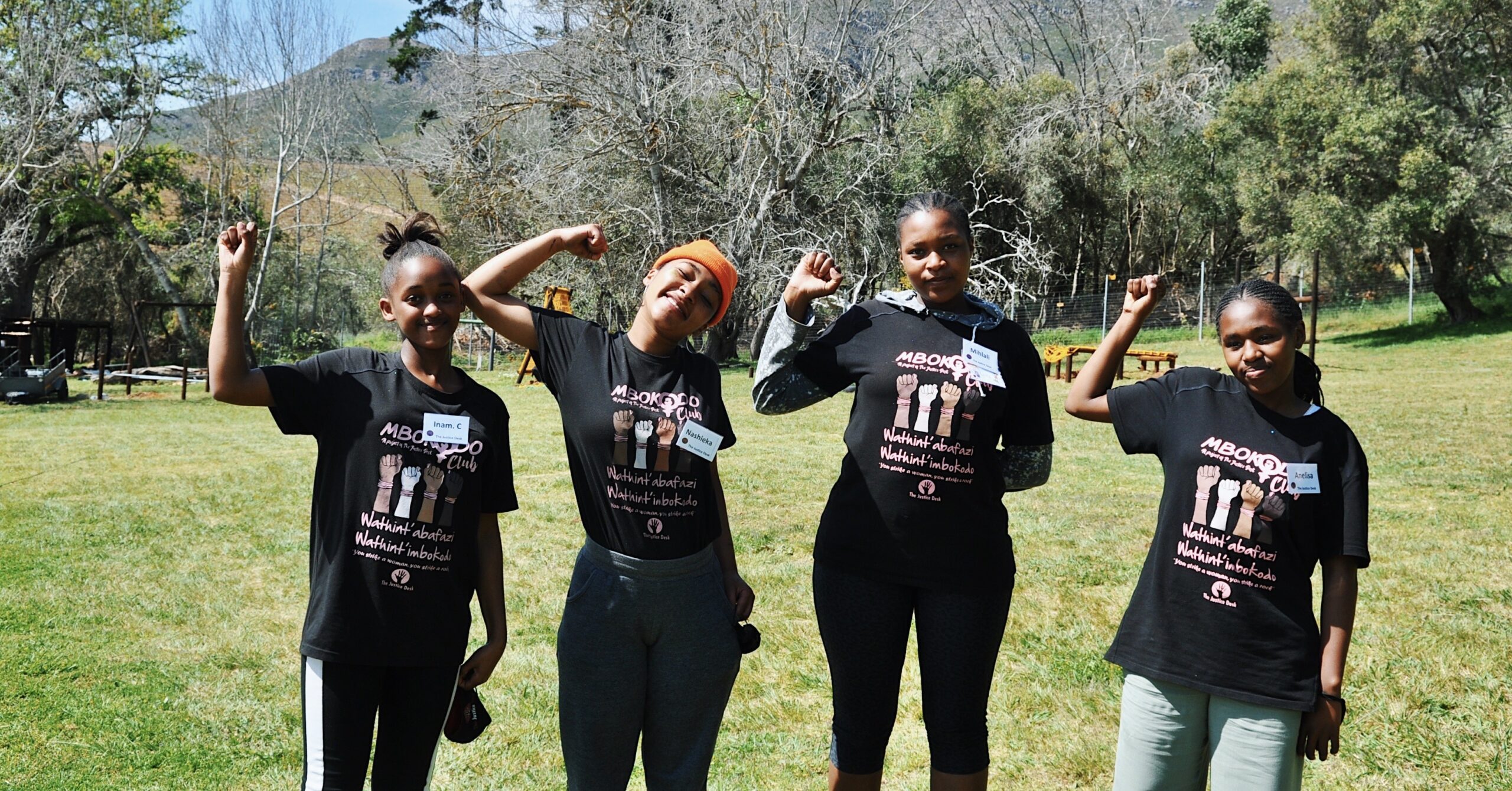 “I didn’t know anything about self-defense when I came here,” Nashieka said. But then pepper spray saved her life when a man armed with a gun attempted to rob Nashieka on her way home from school. Using the self-defense skills she learned at The Mbokodo Club and equipped with pepper spray donated by the Kolisi Foundation in their POWER2YOU Packs, Nashieka was able to escape. 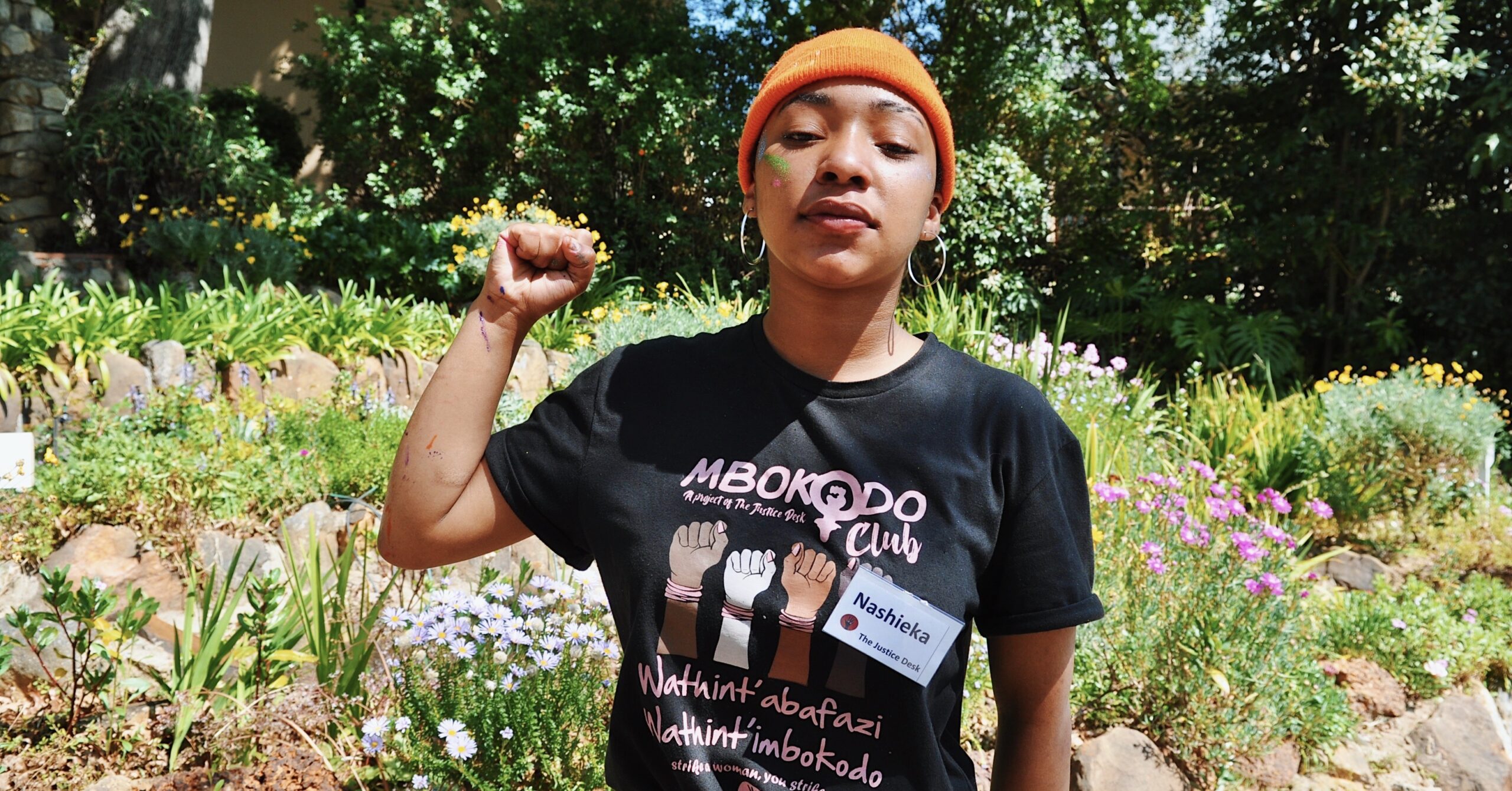 All of the girls are passionate about encouraging other girls to feel empowered by educating them about their rights and equipping their peers with self-defense skills. Nashieka has already shared what she’s learned with her best friend, and Mihlali and Anelisa are sharing what they’ve learned with others.

“I gave a POWER2YOU Pack with pepper spray [a whistle, journal, and resources] to my best friend,” Nashieka said. “She, as a woman, needs to be where I am.”

“I have used this knowledge to encourage people who are experiencing gender-based violence to go and report the matter so that they get help,” Mihlali said. “I have also shared my knowledge about human rights and responsibilities with a few young children in my community. And I will continue to share the knowledge I acquire from the Mbokodo sessions with all those who need it.” 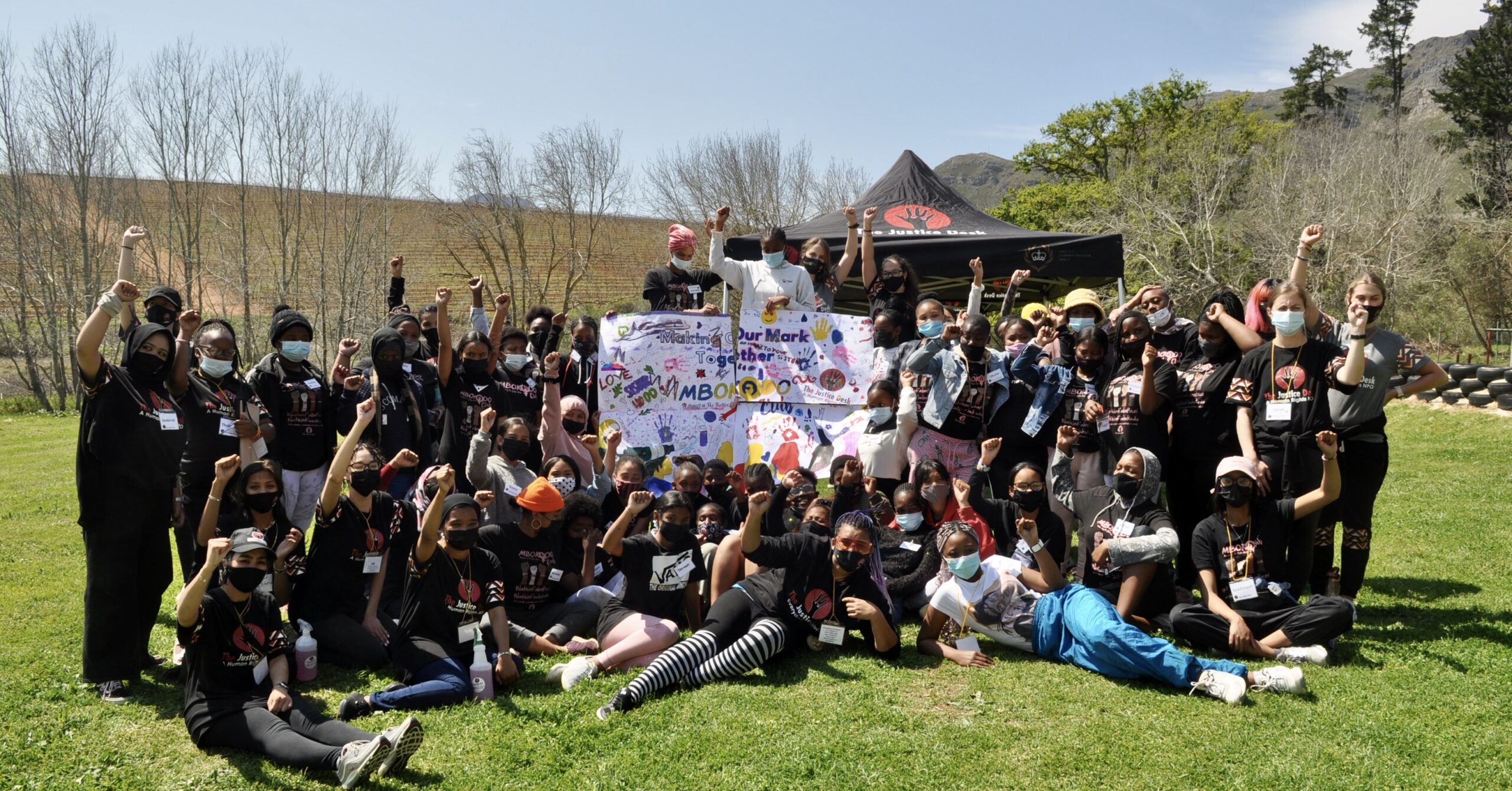 Shamryn Brittan, the digital communications coordinator at the club, said, “They are challenging gender-based violence by making it a topic of conversation in their daily lives and sharing it amongst their communities.”

Together, these girls are joining forces to uplift others and empower them to make a difference in South Africa and beyond.

“The power for the girls to change the continent is in valuing themselves, being more confident, and not allowing anyone to take their dreams from them,” Inam said. “If we love each other and we stand united as girls, we can overcome anything in this world,” Anelsia added.

“It feels good [to be] uplifting other girls,” Mihlali shared “Girls are seen as people who should be obedient; they don’t do what they want to do, they do what they’re told. Girls are just not free in South Africa.” Her dream is for South Africa to be a safe place for all girls to live equally without gender-based violence.

At the edge of Cape Town, the township of Khayelitsha spreads out across the Cape Flats, an area known for harsh winds and dry, arid soil. The current population is around 2.4 million. Thousands of informal structures, mainly made of tin, glint in the high summer sun. Here, some of South Africa’s oldest inequalities are most apparent.

Centuries ago, the areas around Cape Town, including Khayelitsha, used to be home to farmlands, orchards, and vineyards. With the forced relocations of apartheid, the natural resources of the land fell away. Today, Khayelitsha has a high population density and a low amount of resources and necessary infrastructure to support a growing population. The originally planned population size was 200,000 people. But that quickly grew to 400,000 in 2005, and then exploded to 2.4 million in 2020. Of that population, an estimated 1 in 3 people have to travel 200 meters or more to access clean water.

For Othembele Dyantyi, Khayelitsha is home, and she’s passionate about demanding change. 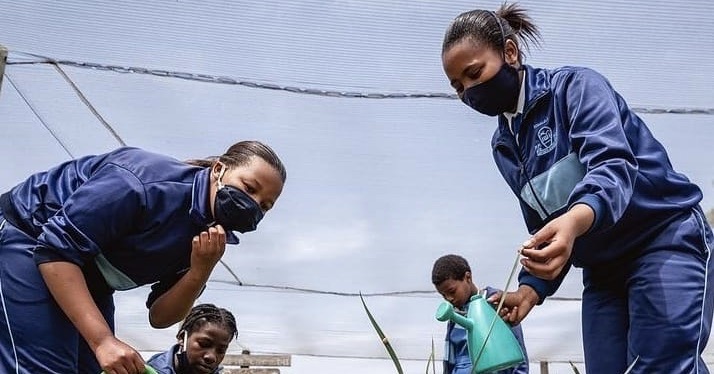 “I live in a marginalized community, and it’s a very underscored community,” Othembele said. “If we have a tree in a neighborhood, it gets cut down immediately because they use the wood for braaing [grilling or roasting] and building shacks. We don’t actually appreciate the resources we have.”

At just 13-years-old, Othembele is a vocal climate justice activist. She started and co-runs an eco club at her school to inspire fellow students to embrace climate justice activism by starting with small changes in their homes and communities. “I want to build that love for nature in my community,” she shared. “I’m going to stand for the voices in my community because I’ve actually experienced what climate change has put me through. We in marginalized communities are experiencing more of it,” she said, using the 2017 droughts as an example.

Othembele first became a climate change activist at 10-years-old when she joined Khayelitsha Eco Warriors. Today, she is a member of the African Climate Alliance (ACA), a youth movement fighting for social and ecological justice. “It’s been a privilege to lead some of the ACA marches speaking for the marginalized youth whose voices are unheard,” Othembele said.

At home, she is making small changes like planting her own vegetable garden, composting organic waste, and developing habits with her family like meat-free Mondays. 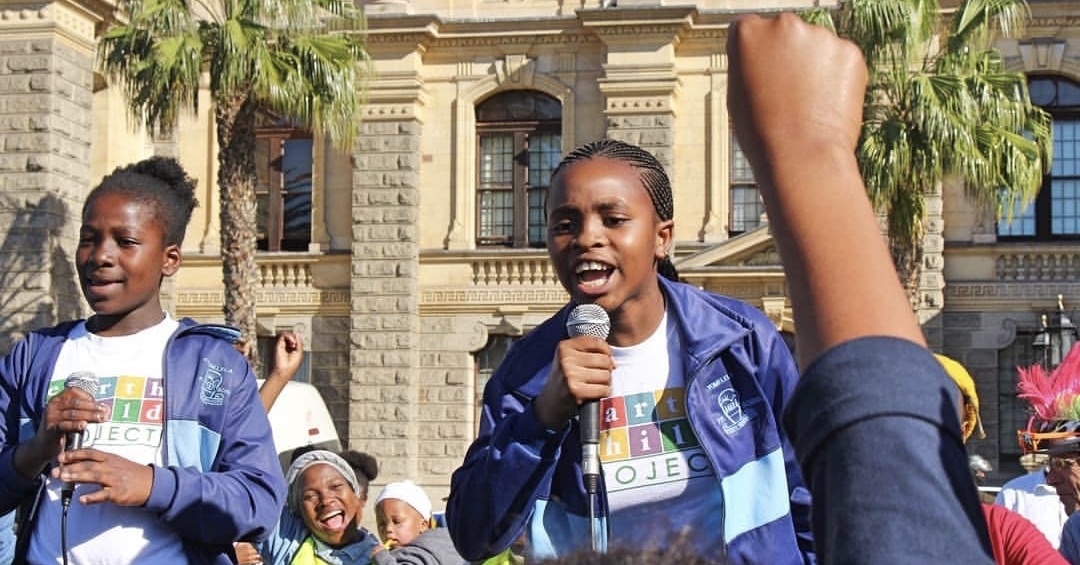 “Being an activist starts at your heart,” she shared. “You must start doing things at home like planting your own vegetables, picking up litter even if it’s not yours, recycling, making Ecobricks, home gardening, saving and reducing water, and composting your organic waste.”

You’re never too young to take a stand

Othembele, Ingrid, Enersh, Nashieka, Mihlali, Inam, and Anelisa are examples of how no one is ever too young to start taking action. With the right skills and opportunities, these girls are changing South Africa, the continent, and the world for the better.

“As a girl, we can do anything if we set our minds to it and are dedicated to do that. You can create any change if you believe in it and if you strive towards that change,” Othembele said. “It can be different in the future because of girls like me.”