A 1-hour drive from Johannesburg, rolling amber hills replace the concrete and skyscrapers of downtown. This is Tarlton. Here Vutlhari Chauke, the woman behind the agricultural business VT Harvest, is fighting against gender stereotypes and disempowerment, and she is bringing other women along with her. 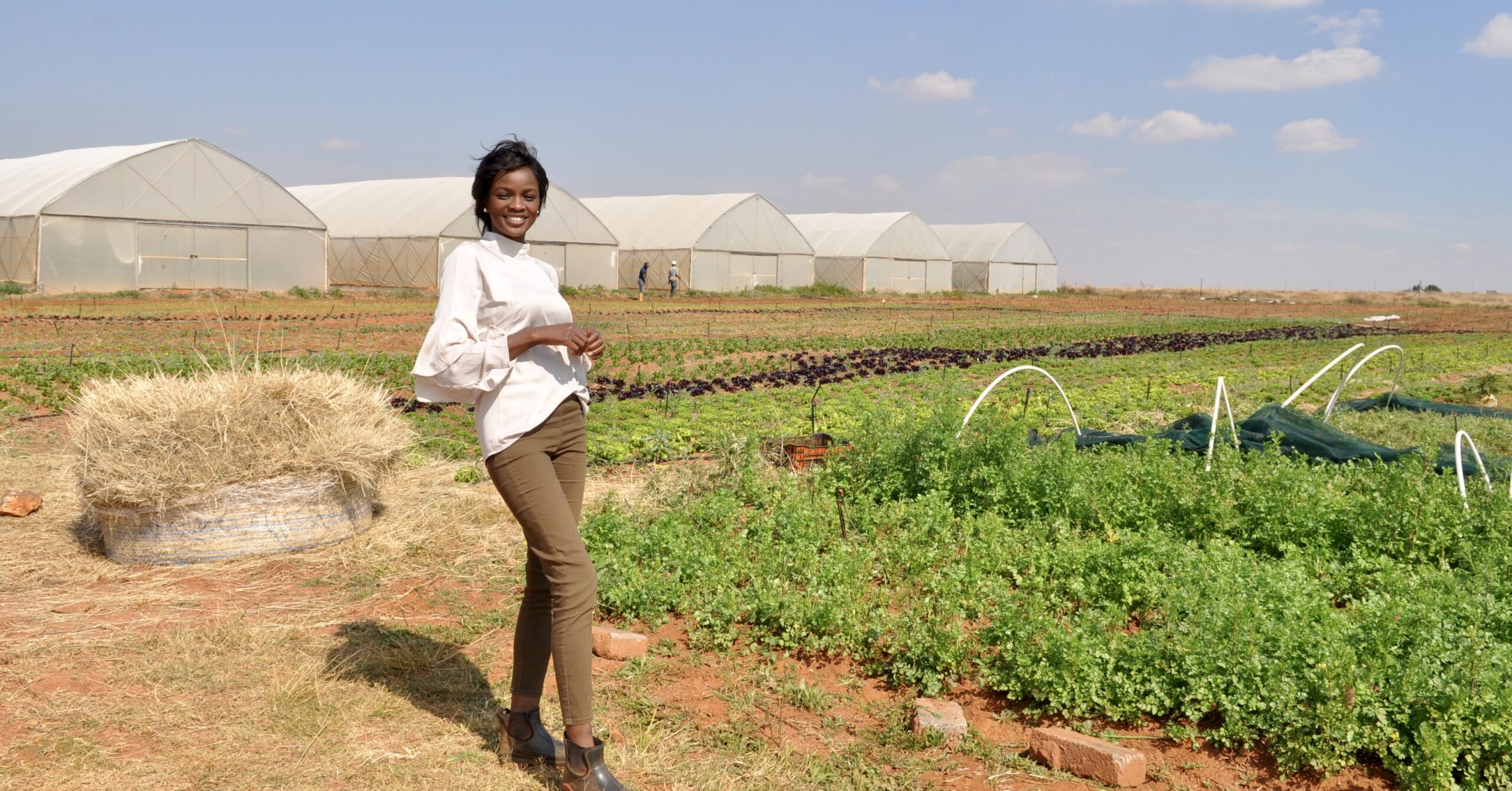 Down a long dirt road, 10 greenhouses stand out against the slanting light of the afternoon sun. Women bend over crops of rocket, mint, coriander, parsley, and patches of peppers and garlic. They’re weeding and tending to the next harvest, and planting seedlings.

For Vutlhari, agricultural work is an opportunity for women to empower themselves, provide for their families, and impact their communities. This is what fuels Vutlhari’s work.

‘Help a woman, and you help her family’

Vutlhari embodies the saying, “Help a woman, and you help her family,” and she is intentional about hiring women in her line of work. Four women work with her on a regular basis, and she employs five more during planting season. “Because I’m a woman, I … want to employ many more women because I know that [with] the little money that they get, they will buy maize meal, they will buy milk, they will buy shoes [for their families],” Vutlhari said. “And that changes generations.” 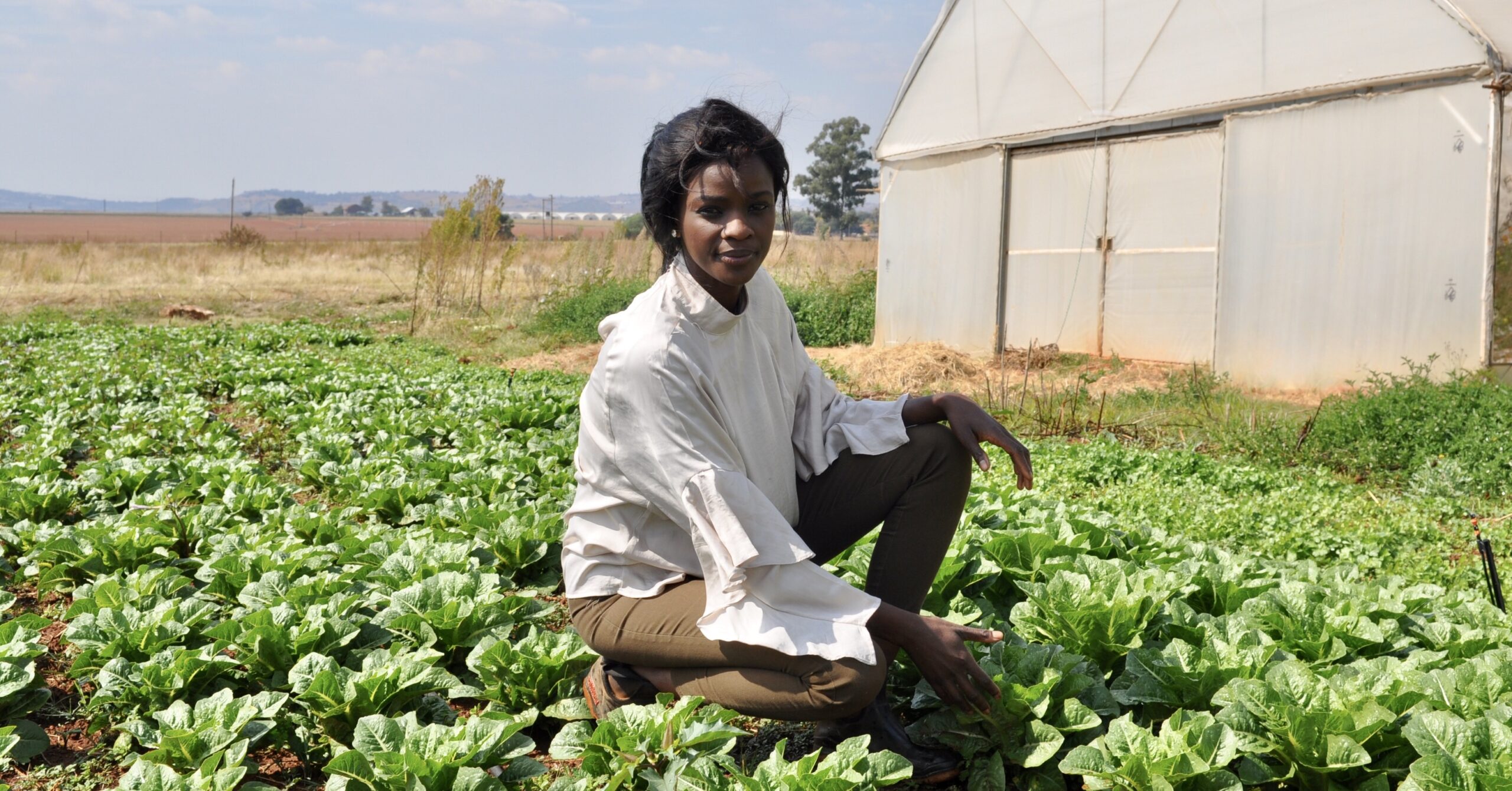 When a woman is able to provide for herself and her family, everything changes. Studies show that women reinvest up to 90% of their incomes back into their families and communities, compared to just 35% by men. Mothers provide better nutrition and healthcare and spend more on their children, creating long-term social and economic benefits.

According to a study by the United Nations Food and Agriculture Organization, if female farmers had the same access to resources as men, it would result in 150 million fewer hungry people globally.

Knowing the impact farming has on women and families inspires Vutlhari. Vutlhari’s agricultural business, VT Harvest, is women-centric. On some days, Vutlhari even brings her 2-year-old son to the farm. Rubber balls and toys from his visit the day before lay in front of the office shed. Sometimes she ties him to her back with a towel while supervising the other women working, who are mothers too. “Most of the women are single women and being able to empower this single woman to look after her children, I know that that will change the generation for that specific family,” Vutlhari said.

In what is primarily a male space, Vutlhari says she’s been encouraged on her journey, and invites other women, especially other black women, to enter agriculture.

While women make up 60 – 80% of smallholder farmers in sub-Saharan Africa, they only make up 15 – 20% of landholders. Additionally, according to a 2017 Land Audit, 70% of farmland in South Africa is owned by the country’s white population, despite people of color making up 90% of the population of South Africa. 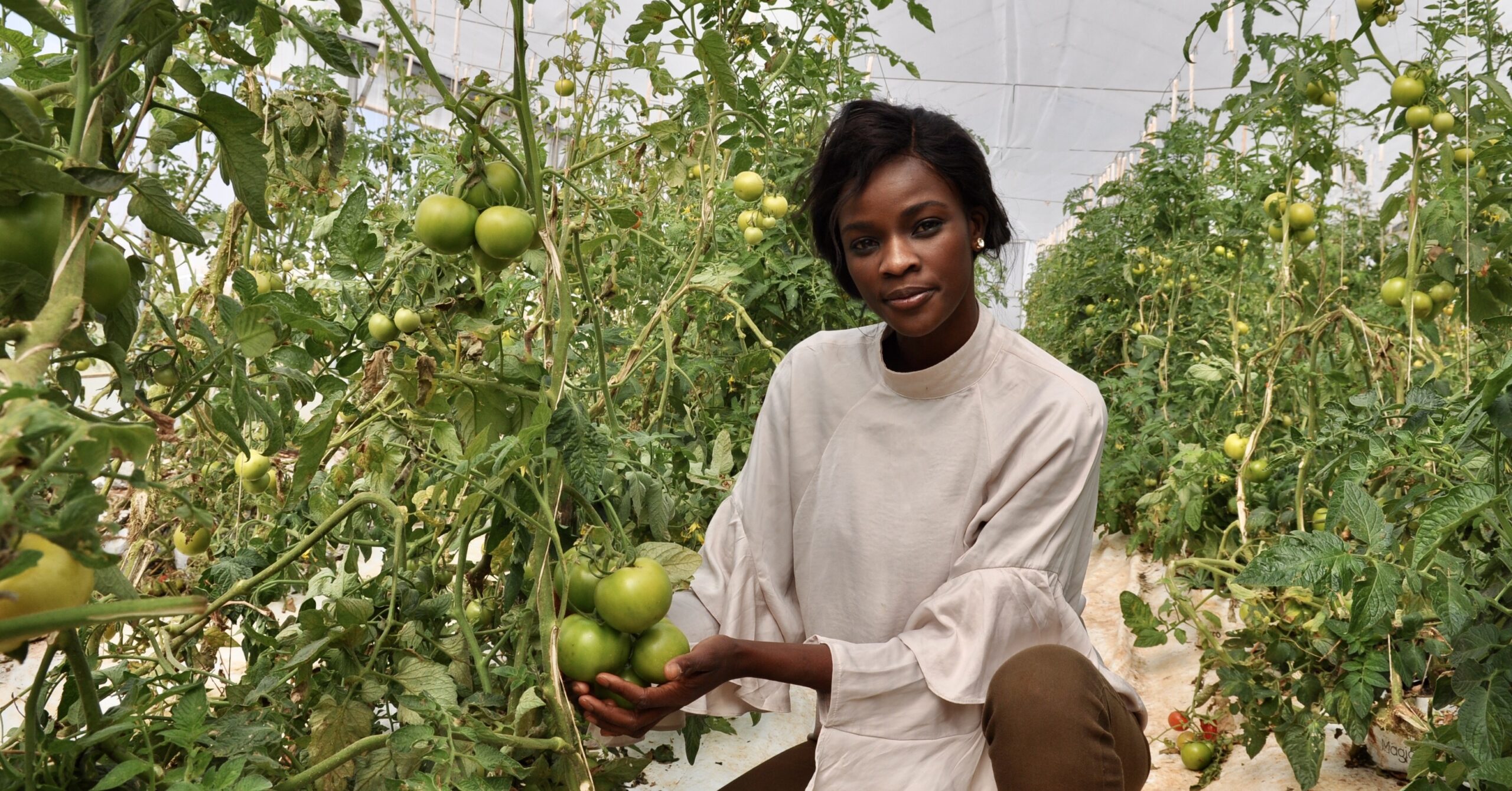 “We’re given an opportunity to mentor the next generation of female farmers,” Vutlhari said.

In the greenhouses, sheltered from the strong South African sun, rows of tomatoes hang from thick vines stretching to the greenhouse roof.

Vutlhari, in gumboots and planters’ gloves, is shattering gender stereotypes in the agricultural field, building a business and generational wealth for her and her son, and the women who work with her. Her advice for other women: you can do this too.

“For women that want to enter the space, they can,” Vutlhari said.

Vutlhari grew up as the only daughter among four brothers in South Africa’s rural province, Limpopo. “From a very young age I knew that I wanted to be an entrepreneur,” she said. “I had big dreams.”

She gave herself the goal to work for herself by the time she turned 30, and when 30 finally started to approach, she prepared to leave her career as a product development manager in corporate Sandton. When she researched the opportunities, especially for black women, in different industries, agriculture stood out the most, she said.

“The first farm [I visited] was run by a woman,” Vutlhari said. Seeing that representation in the industry helped her believe she could do it too. “If she could [do it], then what could stop me?” Vutlhari said.

It took her three months of visiting farms outside of Johannesburg each week to find a farmer willing to lend her a plot to start her business and her first five polytunnels. “That’s what it took,” she said. “I had to prove myself before people would take me seriously.” 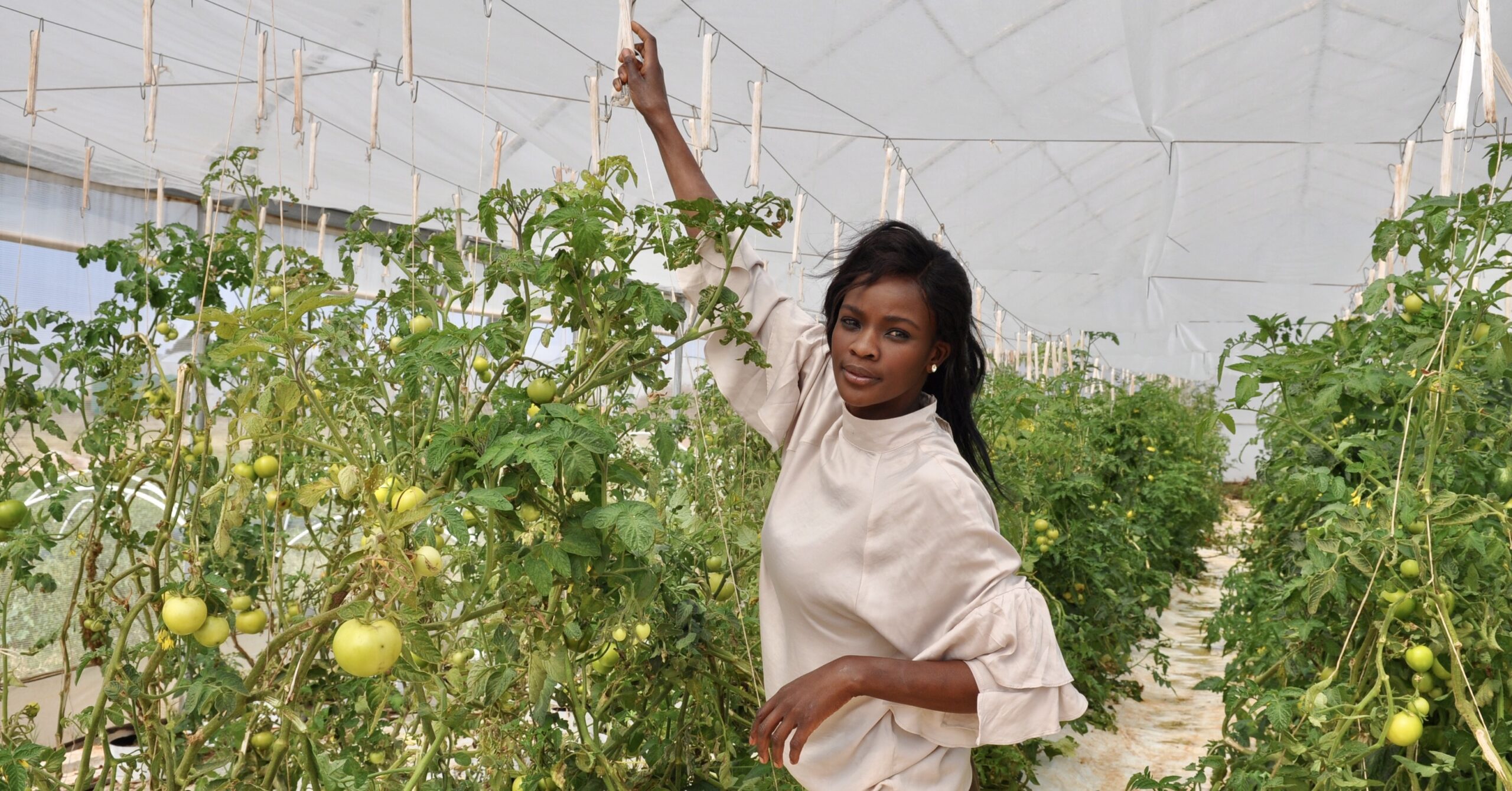 Now four years later she supplies restaurants and big brands like McDonald’s with tomatoes, thanks to a Global Gap Certificate, awarded based on how you preserve and protect the environment. She also supplies street vendors directly with the crops they need. “For me to be able to give them that crop that they require to make a living for their families, this thing [agriculture] is much bigger than myself,” she said. “The opportunities for indirect employment are astronomical.”

“What I’ve realized is because there’s so few women [in agriculture], when you go out there and ask for assistance, people are willing to open up their corporate social investment budgets [when businesses use resources to better the world around them]; they’re willing to give you a market, for example, in areas where you might have found that have only been reserved for a specific customer.”

As a woman in the agricultural space, Vutlhari explained, people are surprised by you, and more willing to help. You differentiate yourself from the competition, and that creates opportunities for other women to enter the space too.

“There came a point where I realized that instead of waiting for someone to create a table and keep fighting for a seat in someone’s table, why don’t I create my own table? I’m an educated black woman,” Vutlhari, who has an MBA, said. “That’s where it started for me.”

“For me being able to create my own table [means that at] this table I can decide who comes on to this table, and for me, it’ll probably be another woman.” 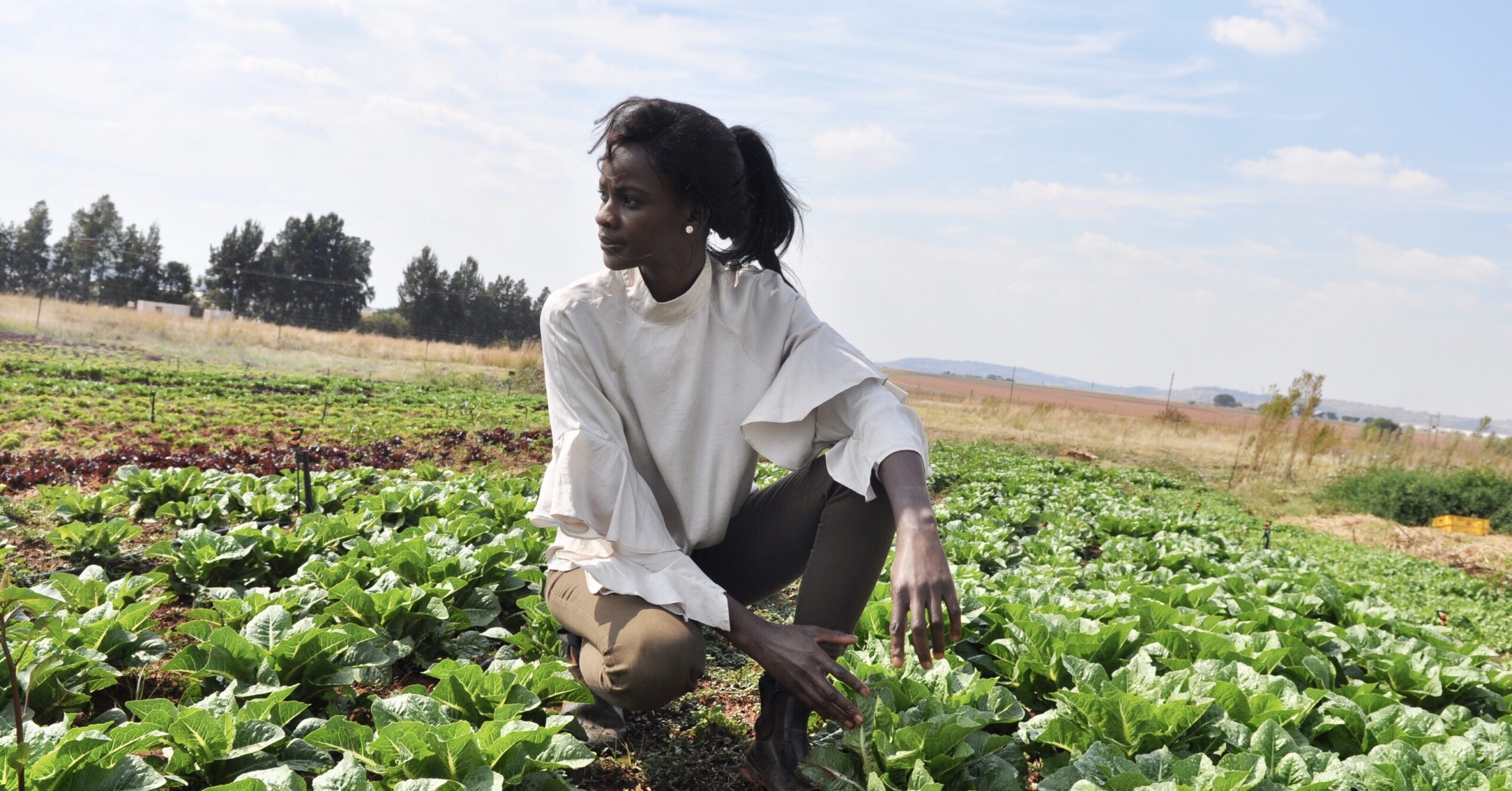 When asked what she would say to inspire other young women and girls to have the courage to take the leap into a male-dominated space, Vutlhari said. “Do not despise starting small. Start small anyway. That’s how I started. For me, it started with a couple of potted plants at my house, that’s how I realized I actually have a thing for this.” Vutlhari means wisdom in her mother tongue, Xitsonga, and that’s exactly what Vutlhari is passing on to other women looking to enter the agricultural industry.

“If you don’t take the leap, you never get to advance,” Vutlhari said. “Dreaming small has never been my forte. If you want to do this, then dream big and start small from wherever you are.”