A roundup of the latest news, stats, and analysis of COVID-19’s impact in Africa. View our data tracker and sign up for our weekly newsletter, and read on for the latest on rich countries hoarding the global vaccine supply, an outbreak of polio in Uganda, and the pandemic’s impact on children’s cancer care in Africa.

Shocking symbol: Europe is set to receive millions of COVID-19 vaccine doses produced in South Africa. Up to 10 million Johnson & Johnson shots partially produced by South African manufacturer Aspen Pharmacare are to be exported to Europe in August and September, and millions more were exported in recent months. Meanwhile, South Africa is yet to receive the overwhelming majority of the 31 million J&J doses it ordered from the company, a key reason why only 7% of its population is fully vaccinated. The government was reportedly forced to waive its right to impose vaccine export restrictions in the confidential contract it signed with the company. Former UK Prime Minister Gordon Brown summed it up nicely: “a shocking symbol of the west’s failure to honour its promise of equitable vaccine distribution.”

4th wave incoming?: The (infuriating) revelation comes just as South Africa’s government predicted that a fourth wave of COVID-19 infections will hit the country in early December. Salim Abdool Karim, former chairman of the government’s ministerial advisory committee on COVID-19, said the fourth wave could last around 75 days, and will likely follow the pattern of the recent third wave, which devastated the country and brought the health system to its knees. New data on excess deaths indicates that South Africa may be one of the world’s hardest-hit countries by the virus.

It gets worse: Not content just to gobble up African-produced vaccines, some rich nations have also been dipping into the COVAX supply. In late June alone, COVAX sent 530,000 doses to the UK, more than double the amount sent that month to the entire continent of Africa. Other wealthy offenders to receive doses from COVAX include Australia, Canada, New Zealand, and Qatar. In the meantime, COVAX has only been able to deliver 25 million of the 700 million doses the African Union expects this year. “If we had tried to withhold vaccines from parts of the world, could we have made it any worse than it is today?”, lamented the WHO’s Bruce Aylward.

A boost for COVID-19: In yet another blow to global vaccine equity (I know – we’re a broken record at this point), the Biden administration will advise that most Americans get a booster shot eight months after they received their second dose. Last week, we reported that a number of countries, including the US, have opted to ignore an appeal from the WHO to hold off on third doses until more people around the world can get a first shot. This is despite the fact that the use of booster shots in wealthy countries could, paradoxically, give COVID-19 a boost; it makes it more likely that dangerous, vaccine-resistant variants will emerge as the virus rips through unvaccinated populations in low-income countries.

Outbreak²: The Ivory Coast reported its first case of Ebola in more than 25 years. The WHO expressed “immense concern” that the case was identified in a densely populated area, similar to the massive outbreak of 2014-2016. The country started a vaccination campaign against Ebola, with health workers, close relatives and contacts of the victim the first to get the jab.

Outbreak³: Uganda’s Ministry of Health confirmed an outbreak of polio, declaring a public health emergency. The WHO declared Africa free of the wild-polio virus in August 2020 — but a new “vaccine-derived” strain has emerged, affecting around 20 African countries, including three countries neighbouring Uganda: The Democratic Republic of the Congo, South Sudan, and Kenya. Vaccination rates against polio in Uganda decreased during the pandemic, and the new strain is infecting children in communities with low immunization levels.

Heartbreak: Nearly 30,000 children in sub-Saharan Africa are believed to have died from cancer during the pandemic. Measures to tackle COVID-19 have led to disruptions in children’s cancer treatment, with 46% of African countries reporting that cancer screening was impacted. The childhood cancer survival rate in Africa stands at 20%, compared with 80% in high-income countries. The WHO’s Dr. Jean-Marie Dangou described the figures as “truly heartbreaking,” stressing that “childhood cancers are curable if detected early and comprehensive care provided.”

Trading troubles: A shipping container shortage is slowing Africa-China trade. As economies open up around the world, vessels are prioritising the more lucrative China-Europe and trans-Pacific routes, leaving African traders facing cargo delays of weeks or even months. Gilbert Langat of the Shippers Council of Eastern Africa said that sub-Saharan Africa has been worst affected, as costs for freight shipping have tripled due to the high demand.

Shot in the arm: Nigeria launched the second phase of its vaccination rollout amid a recent spike in infections. Nigeria, Africa’s most populous country, recently received over 4 million doses of the Moderna vaccine donated by the US through COVAX, as well as around 120,000 doses of J&J through initial supplies from the African Union. As it stands, only 0.7% of people in Nigeria are fully vaccinated. 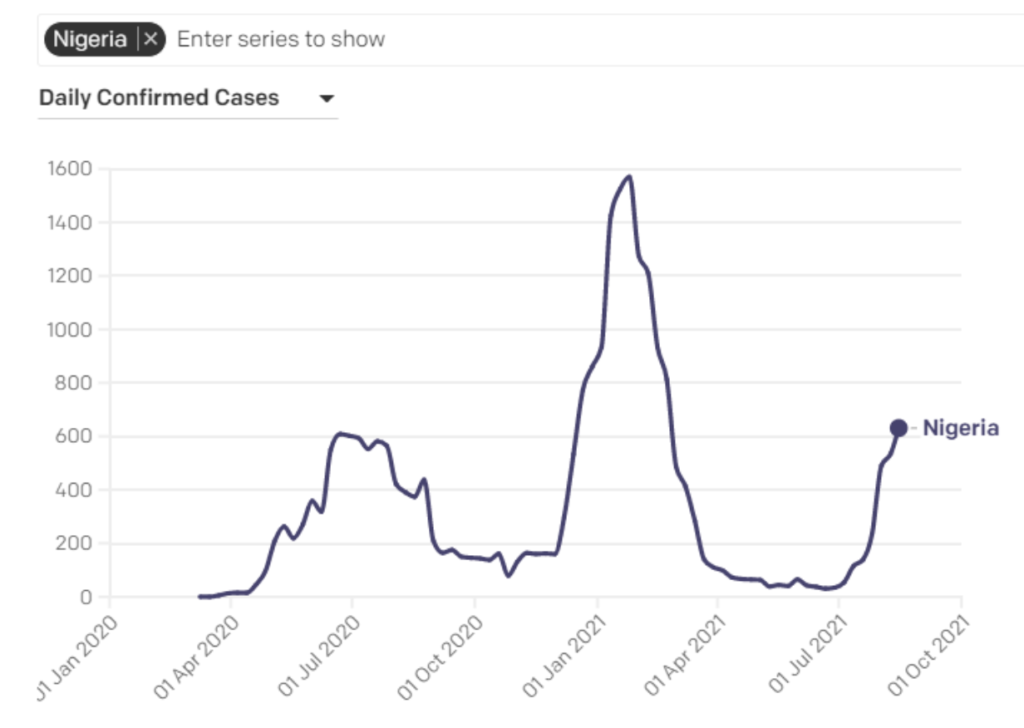 Build back better: COVID-19 exposed long-standing weaknesses in Somalia’s healthcare system, following years of underinvestment. This is according to a report released by Amnesty International this week, which found that access to healthcare for COVID-19 patients in the country has been “wholly inadequate,” with just one hospital managing all cases across the south-central region during the first wave of infections. The report argues that now is the time for Somalia to use debt relief to transform the country’s healthcare system for the future.

A brutal pandemic: The death of 22-year-old Benson Njiru Ndwiga and his 19-year-old brother Emmanuel in police custody in Kianjokoma has once again highlighted the excessive use of force and violence by Kenya’s police when enforcing COVID rules. Rasna Warah has the details on the case, which sparked protests in Kenya’s Embu County and a social media campaign calling for justice. This week, six police officers were taken into custody, as the investigation into the brothers’ death continues.