The costs of the COVID-19 pandemic are going to be monumental. Africa alone is estimated to need US$100-$200 billion to address the impact. In higher income countries, governments have stepped forward with trillions in economic stimulus packages. But the majority of developing countries do not have the money to cover the costs of this pandemic.

Debt relief is one of the fastest, most effective means of freeing up cash in developing country budgets. The recent G20 agreement to suspend debt repayments for the poorest countries for the rest of 2020 will free up some badly needed cash. But it is not enough.

The current deal only covers bilateral debt (loans from other governments), which makes up about half of total debt service for these countries. Debt to multilateral institutions and private debt, owed to bondholders and commercial banks, make up another US$24 billion.

Freeing up the rest of the debt service is crucial to give the most flexibility to governments, and to ensure that money saved from bilateral debt relief isn’t being used to finance debt payments to multilateral or private creditors. No country should be faced with the impossible choice of saving lives or making debt repayments during this pandemic. 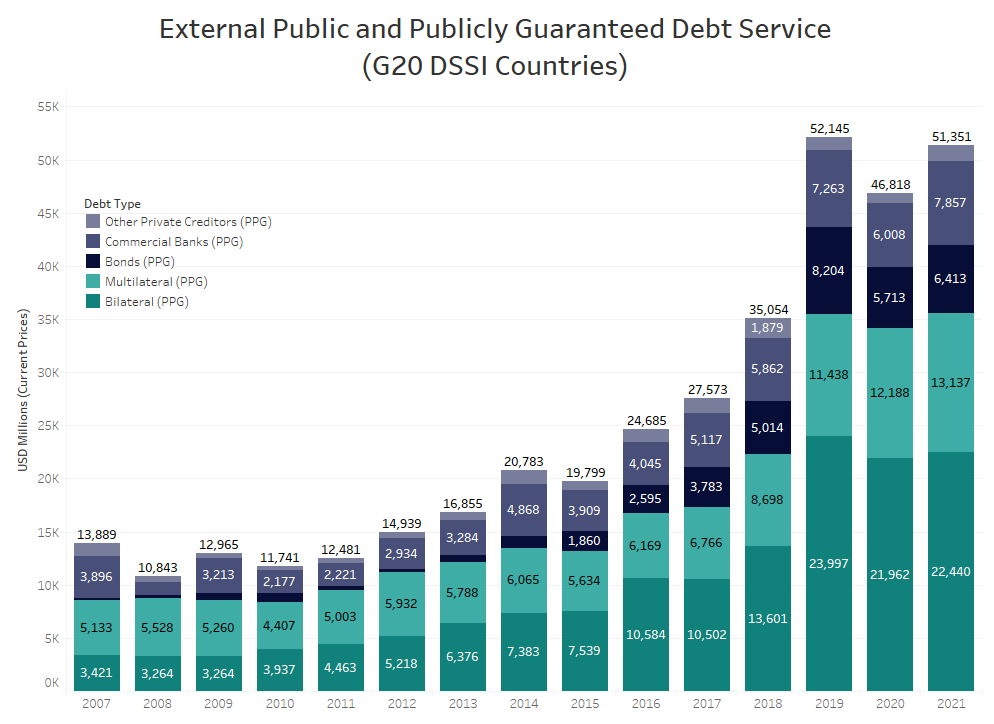 Analysis by The ONE Campaign using the World Bank’s International Debt Statistics. Click to interact with the data.

Here’s how debt relief needs to be expanded in order to free up more financing for countries that need it most.

The current G20 agreement covers only the remaining eight months of 2020, but it is clear things will not go back to normal that soon.

The standstill must therefore be extended to cover all of 2021 to give greater security and ability to plan for use of the funds. For the 73 countries covered by the current G20 deal* this means an additional US$22 billion available for the crisis in bilateral debt suspension for 2021.

The crisis will also affect all countries regardless of their income level. No country in the world had planned for this type of shock. So solidarity should extend to all countries in Africa that may be struggling, as called for by African leaders. Extending a bilateral debt suspension to include all of Africa would free up an additional US$7.6 billion in 2020 and at least US$6 billion in 2021.

The G20 also called on multilateral lenders to provide comparable debt relief. Total multilateral debt for the G20 debt relief-eligible countries totalled US$12 billion for 2020, about one-third of which is owed to the World Bank. At least US$13 billion is due to multilaterals in 2021. And expanding this to cover all African countries would add approximately US$6.5 billion in 2020 and US$5.8 billion in 2021 to the previous totals.

So far, only the IMF has approved debt cancellation for six months for the 25 poorest countries through its Catastrophe Containment and Relief Trust (CCRT) Fund, worth approximately US$214 million. This is of course very welcome, but the World Bank does not have a comparable debt relief fund.

Multilaterals are reluctant to participate in a debt standstill due to concerns about their cash-flow and credit ratings. In the short term, the World Bank is concerned that without money coming in from debt repayments, it would be unable to frontload new loans and grants. In the long term, the Bank is concerned about how a suspension might affect its credit rating, and thus its ability to borrow money from markets at the lowest available rates, and re-lend that money to developing countries. Fitch, a rating agency, has already issued a warning against providing a suspension without compensation by shareholders.

Neither of these concerns are insurmountable, however. The most realistic option — to reassure rating agencies and ensure a healthy cash flow — would be for shareholders to backfill payments to multilateral development banks to compensate for the suspension of debt payments. For this, the World Bank could set up a CCRT-like fund, capitalised by aid from donor countries.

African finance experts have put forward a promising proposal on a Special Purpose Vehicle for Africa, which could swap private debt for new concessional loans. It will need to be managed by a multilateral development bank or central bank, and capitalised in part by donors. Experts at the Centre for Policy Research suggested the IMF or World Bank create a Central Credit Facility. Each of these proposals will need to be supported by official creditors and agreed to by private creditors.

With any voluntary initiative, some private creditors may abstain, and instead prefer to go after countries that default. Ensuring that vulture funds can’t sue defaulting countries and seize their assets would mean seeking changes to legislation in the key jurisdictions where debt contracts are agreed — primarily the US and the UK.

A suspension is a useful first step but, given the depth of the crisis, it is just pushing the problem down the line. Ultimately, a carefully managed process to restructure or cancel unsustainable debt is needed for countries whose economies do not quickly recover. While not all countries will need or want debt cancellation (as this will inevitably affect their access to credit in the future), there still needs to be a more comprehensive and fair process to work out debt restructuring needs, that does not differ for every country.

This should go hand in hand with ensuring debt relief funds are spent transparently on emergency response and social sectors. The G20 suspension agreement requires countries to report on how they spend these funds to the IMF. It should be replicated for all funds made available through rescheduled or canceled debt, and should include civil society in the monitoring and tracking of these funds.

* The G20 debt suspension included all IDA-eligible countries (76 countries) plus Angola. However, only countries that are not in arrears to the World Bank and IMF are eligible, which excludes Syria, Sudan, Eritrea and Zimbabwe.