By Winston Mbanda, communications officer, KEMRI-CDC, Kisumu, Kenya. Stay tuned to the ONE Blog this week for more stories like these for World Malaria Day.

On December 1, 2010, my wife Isabel, a high school teacher in Bungoma District, western Kenya, and our two daughters, Hope and Joy, were traveling to join me in Nairobi for December holidays. At the time, I was working in Nairobi, which is about 240 miles from Bungoma. It had been a while since we met as a family and we greatly anticipated the exciting moment of reunion. 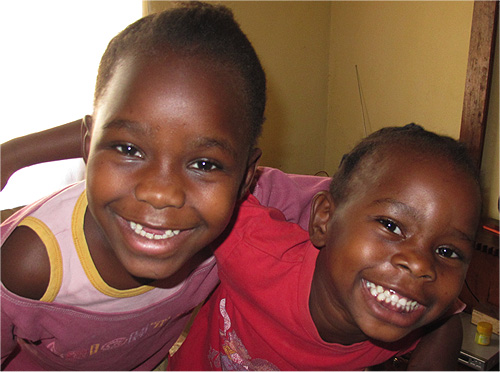 When they arrived, Isabel informed me that Joy, then three and a half years old, was complaining of headaches. Initially we thought the headache could have been caused by the six hours of traveling from Bungoma to Nairobi. That evening we gave her some pain killers, but she still complained about having a headache the following day.

Since the family had come from western Kenya where malaria is common, we suspected she could be suffering from malaria and took her to a private clinic for treatment. Three days after the malaria treatment, she started complaining of headaches again. She also ran a high temperature and had lost appetite. We decided to take her to Nairobi Outpatient Hospital for further check up. At the hospital, a number of tests were done and she was found again to be suffering from malaria. She was treated and seemed to improve, although she still had high temperature and her appetite didn’t improve.

On the fifth day after treatment at Nairobi Outpatient Hospital, she started vomiting and her temperature rose as high as 39 degrees Celsius (102.2 Fahrenheit). We took her back to the hospital, but we were referred to the Kenyatta National Hospital, the biggest public referral hospital in Kenya.

At Kenyatta National Hospital, they diagnosed Joy with typhoid and treated her for that. Initially the doctor who saw her had considered having her admitted, but due to congestion in the children’s ward, she thought it best to have Joy treated as an outpatient. Joy was on typhoid treatment for the next three days, but showed no sign of improvement. She had lost much weight, was very weak, and surviving only on water and glucose. She couldn’t keep any food down.

Her condition was physically and emotionally draining for the entire family. We had to monitor her condition constantly, especially her fluctuating temperature. On my side, I had not reported for duty for many days. Isabel seemed to lose hope and was getting very frustrated. Our daughter Hope, five years old then, was unhappy and upset — her sister and playmate was sick. We had spent approximately $250, a significant sum for the average Kenyan family, yet nothing seemed to work. What we had envisioned as a wonderful time together during the December holidays was turning into endless rounds of despair.

By good fortune, an in-law directed us to Dr. Walter Otieno in Kisumu. Initially, I didn’t support the idea of taking Joy back to Kisumu for treatment, but I later relented. Dr. Otieno recommended a number of tests, which led him to conclude that she was definitely suffering from malaria. By this time her eyes appeared yellowish and she was very weak. He prescribed an artemisinin-based combination drug and some pain killers. A week later, Joy was up and running. Since then, she is doing well and ever joyful as her name.

When I joined KEMRI/CDC in April last year, I came to learn that Dr. Walter Otieno is the Principal Investigator in the RTS,S malaria vaccine candidate study at KEMRI/WRP Kombewa site, one of 11 sites for the trial. As a family, we appreciate his role in saving our daughter and also pray that his work and that of the other researchers produces a vaccine against malaria that can save many more from the heartache and deaths caused by the this terrible disease.