2021 is a monumental year for the UK, as it hosts the G7, the Global Education Summit, and COP26. Historically, the UK has been an international development superpower, having been one of the most generous and largest donors. In November 2020, the UK made a strategic misstep as it cut its aid budget by 30% and reduced its ODA to GNI ratio from 0.7% to 0.5%.

This dramatic cut in the aid budget during a global pandemic will have disastrous consequences. ONE analysis predicts that all sectors could see cuts of up to 63%. This translates to 9 million women, children, and adolescents no longer receiving nutrition support in Nigeria. 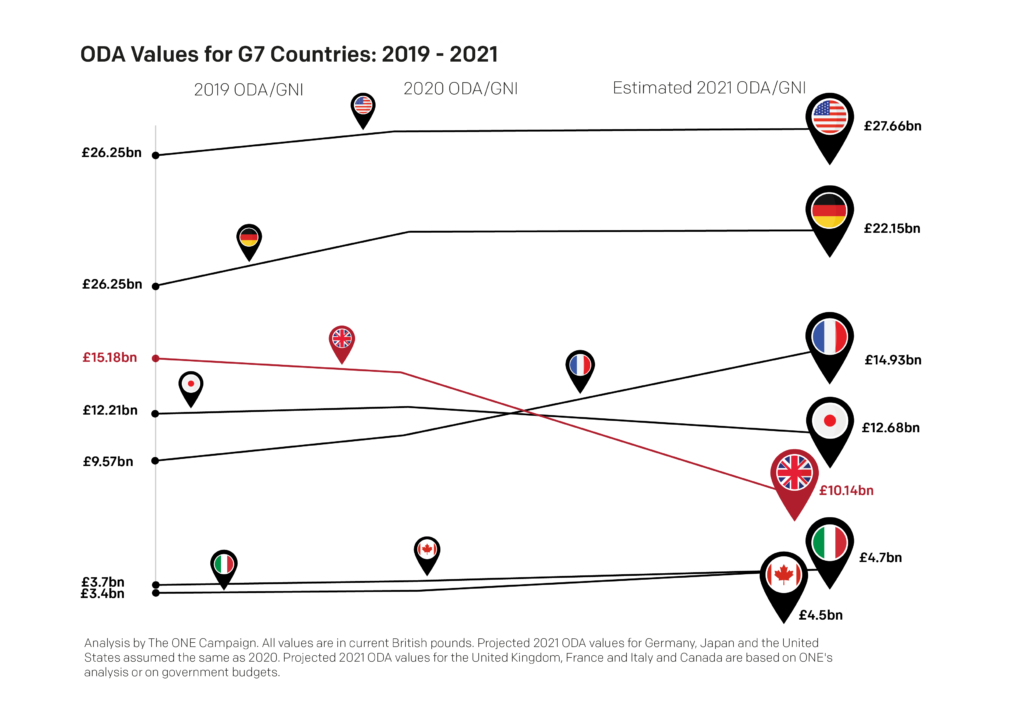 In early March, French MPs approved an international development bill at France’s National Assembly, which includes a clear target to spend 0.7% of GNI on ODA by 2025. While France is intending to increase its aid budget, the UK cutting its aid budget has not gone unnoticed by French politicians. Jean-Yves Le Drian, Minister of Europe and foreign affairs stated, “Unlike some of our neighbours, we have decided to maintain our commitment despite the current crisis, because the crisis has reinforced our belief that it is absolutely crucial to maintain it”.

France is not the only G7 country stepping up. Germany exceeded the 0.7% target last year. The Biden administration has signalled that they will elevate development, indicating that there could be an increase in the US’s development and diplomacy budget of more than $14 billion than what was committed in the previous year. Just last week, USAID Chief Samantha Power indicated that the UK cutting its aid budget will have a knock-on effect on other donors, and that they would have to make up the UK’s shortfalls.

As the UK hosts three global summits this year, it should consider carefully what message the aid cuts will send. If the aid cuts are not reversed, the UK will lose its status as a global leader on issues such as girls’ education, climate change, and global health security.

Find out more about UK aid.