Fairtrade Fortnight is an campaign run every year by the Fairtrade Foundation, to raise awareness about Fairtrade products in the UK. This year, Colombian farmer Albeiro Alfonso ‘Foncho’ Cantillo, is travelling around the UK to highlight the pressure on banana farmers from aggressive price wars, driven by supermarkets, which drive banana prices down.

Bananas in the UK are priced at a level that does not reflect the true cost of production. A single banana can be grown on the other side of the world and shipped to Britain to be sold at 11p, less than the price of an apple grown on a UK farm, which costs around 20p.

‘When the price of bananas goes down we suffer the impact. Our living conditions go down’ – Albeiro Alfonso ‘Foncho’ Cantillo

In the UK, the price we pay for our bananas has nearly halved over the last 10 years. However, in Europe the price has continued to increase. The retail price of bananas has increased in France, Italy and Germany by 10%, 3.9% and 7.2% respectively.

80% of the bananas bought in the UK are from supermarkets, giving them a dominant position in banana supply chain. While some supermarkets have championed Fairtrade bananas, they still only account for 1 in 3 bananas sold in the UK.

It’s important that supermarkets support banana farmers, and price bananas responsibly, to give farmers and consumers a fair deal. 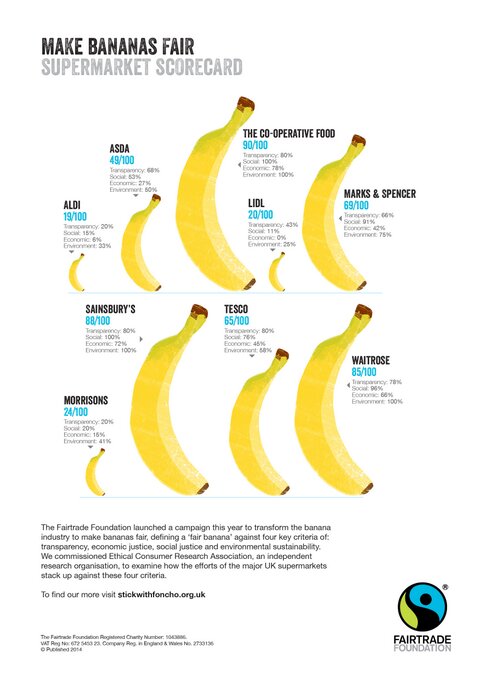 Meanwhile living costs for banana farmers and workers in the three countries that provide 70% of the UK’s bananas – Colombia, the Dominican Republic and Ecuador – have rocketed by 85% 350% and 240% respectively.

Despite producing about 70% of the world’s food, over half of the world’s hungry people are small farmers themselves. That’s why the Fairtrade Foundation says we should Make Food Fair.

“Small farmers and plantation workers are the collateral damage in supermarket price wars. The poorest people are bearing the cost of our cheap bananas and they have to work harder and harder as what they earn is worth less and less in their communities.

As a result, a product that is worth billions of pounds in global trade relies on poverty-level income for the people who grow it,” – Fairtrade Foundation Chief Executive Michael Gidney.

The Fairtrade Foundation is calling for:

1. Supermarkets to use their dominant position in banana supply chains responsibly, like other countries in Europe. The retail price of bananas has increased in France, Italy and Germany by 10%, 3.9% and 7.2% respectively.

2. Vince Cable, Secretary of State in The Department for Business, Innovation and Skills (BIS), to investigate retailer pricing on bananas and evaluate its impact on the long-term interests of banana producers and UK consumers. Sign Foncho’s petition to investigate the impact of unsustainable supermarket pricing practices.

3. The Department for International Development (DFID) to ensure the UK’s positive impact on poverty among banana farmers and workers is strengthened by supporting initiatives that incentivise living wages and payment of the cost of sustainable production in agricultural supply chains.

Find out more about the campaign Stick with Foncho.