The fight for gender equality requires action on multiple fronts. It happens in many places, from communities to court rooms, pushed by citizens and politicians alike. But while many democracies already have constitutionally promised equality, the reality faced by women and girls says differently. When this happens, how do we hold governments accountable to the promise of equality?

Melene Rossouw, a lawyer in South Africa, is fighting for gender equality through democratic power and advocacy. Rather than advocating the government to change laws or create new ones, she is teaching women and girls to advocate for the constitutional rights that they already have.

Melene is one of three activists starring in our new documentary series, Yours in Power. In this series, she and two other activists have written letters to their younger selves. These letters offer encouragement, words of wisdom, and inspiration for the next generation of activists.

From an ambitious young girl to a champion of human rights, Melene has come to understand that a constitutional guarantee of equality is only the first step. Individuals and communities need to be in charge of fulfilling those promises.

“The quality of our democracy is defined by its people. If people are not educated about the power vested in their own human rights, and how to claim it, one cannot rightfully boast to have a thriving democracy.”

Melene grew up in the Cape flats of South Africa. Her home was a shack behind someone else’s house, where she saw the effects of poverty daily. The women in her family struggled to survive, which Melene now views as the inspiration that drives her fight for equality.

Melene’s mother was also an activist. She worked to protect the women and children in their neighborhood from abuse. Like her mother, Melene became a fighter for women’s rights, though she takes a different approach to that fight.

In 2009, Melene became an Attorney in the High Court of South Africa, later working for South Africa’s president as Cabinet Committee Secretary for Justice and Crime Prevention. Though she had the opportunity to continue climbing in the South African government, she instead turned her focus to advocacy. Now, she’s empowering women and girls to fight for the rights promised under South Africa’s Constitution. 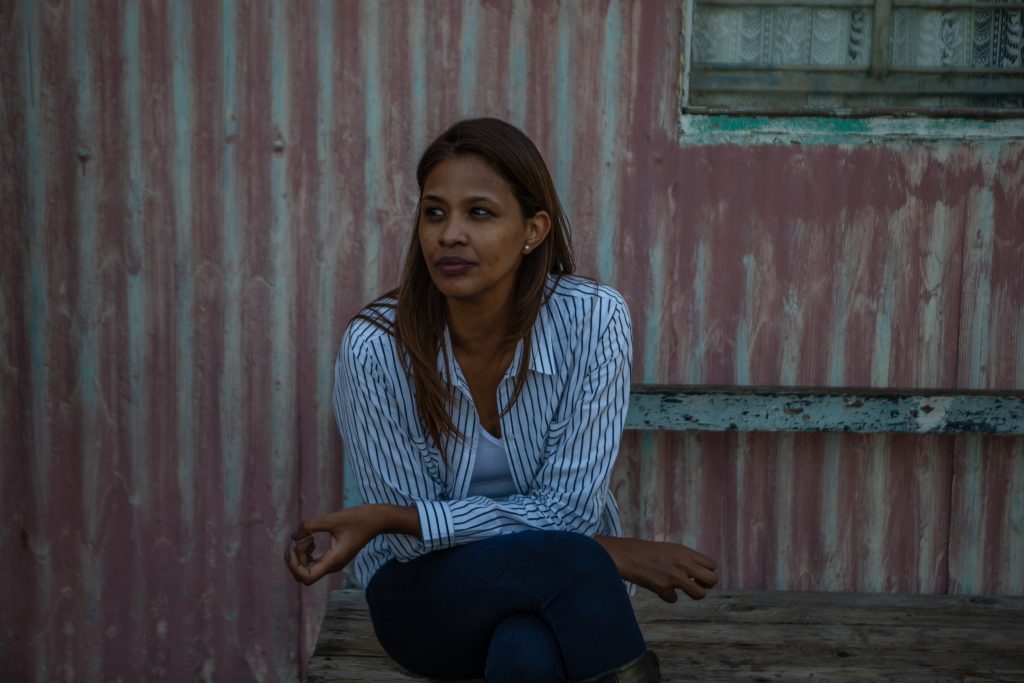 Melene sitting in front of her childhood home.

“The quality of our democracy is defined by its people,” says Melene. “If people are not educated about the power vested in their own human rights, and how to claim it, one cannot rightfully boast to have a thriving democracy. Because I believe in this fundamental principle I choose to add my voice, passion, experience and education to this important narrative, and drive social change through human rights education.”

The promises of South Africa’s Constitution

South Africa’s first democratically elected convention approved the nation’s constitution post-apartheid in 1996. This document defines the democratic rights of all citizens and outlines the values of the nation as a whole. These values include human dignity, human rights, non-sexism, accountability, and government openness.

Many consider South Africa’s Bill of Rights to be one of the most progressive in the world. The document not only guarantees civil rights, such as the right to vote and the right to privacy. It also reflects many social issues, including the rights to good health and clean water. It also states that individuals and the state cannot discriminate, including on the basis of gender.

But the words printed in this nation-defining document are not always reflected in the realities experienced by women and girls.

While the backbone of South Africa’s legal system guarantees equality to all people, women and girls too often face discrimination. The obstacles they face show clear inequalities, which are in violation of the rights outlined in their constitution.

But these rankings don’t tell the whole story. Though South Africa has smaller gender gaps than other countries, there are still major inequalities.

“Gender equality for me is more than just formal equality. It must be substantive, too.”

The prevalence of HIV illustrates a major inequality in health. South Africa is home to the biggest HIV epidemic in the world: 7.7 million people in the country are living with HIV. Almost two-thirds of the adults living with HIV in South Africa are women. Young women aged 15-24 years old are also more than twice as likely to contract HIV as young men of the same age.

Substantial issues exist in political empowerment, as well. While South Africa has appointed women to political positions, equality is about more than the number of women inside a government building.

“What we want is authentic, unrestricted women voices in political leadership,” Melene says. “Gender equality for me is more than just formal equality. It must be substantive, too.”

Large obstacles exist in other key areas as well. In 2018, the nation ranked 72nd in educational attainment parity between women and men. They also ranked 91st for equal economic participation and opportunity, and the nation experienced a slight decline in wage equality from 2017 to 2018.

One issue in particular has garnered global attention in the past year. After multiple rape and murder cases became public, thousands of people took to the streets and demanded action on gender-based violence. Their anger and concern are well-founded.

In 2016, South Africa had the fourth highest female murder rate per capita in the world, at approximately 12.5 per 100,000 women and girls. According to the South African Police Service, nearly 3,000 women were killed in 2017 and 2018. Sexual offenses, including assault and rape, are also rising nationally. These statistics are at odds with the constitution, which grants all people freedom and security, including “the right to be free from all forms of violence.”

These issues in South Africa show that governmental declarations of equality do not translate to actual equality. While documented promises of equality are important, lived experiences must back them up. According to Melene, citizens must be in charge of ensuring those promises become reality.

“The government here can create the favorable framework,” Melene explains, “but the people need to find the solutions.” 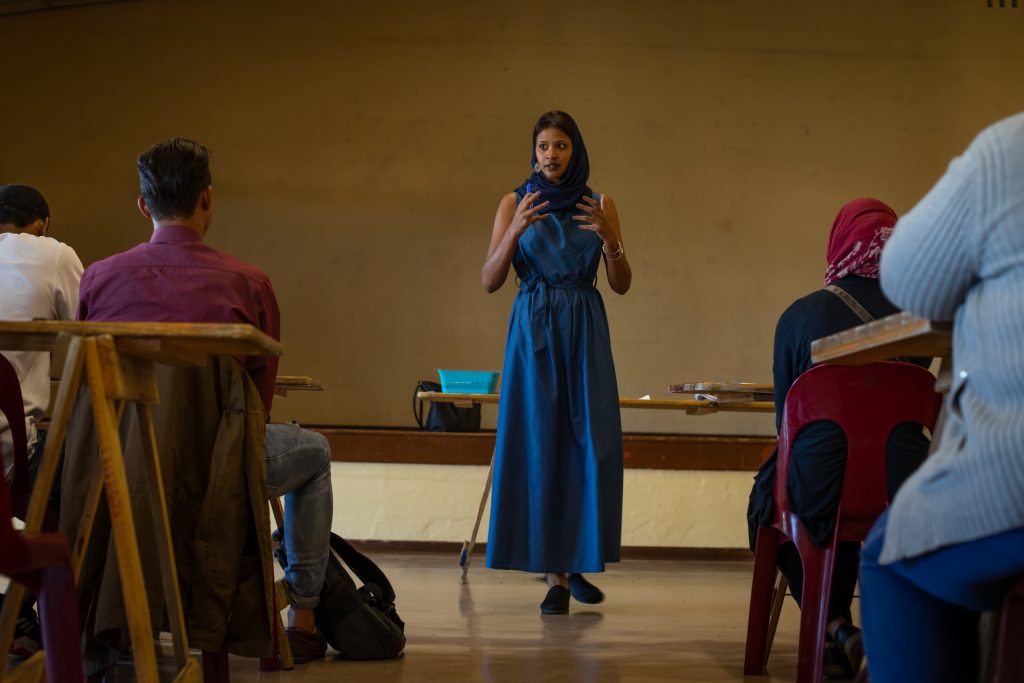 Melene founded the Women Lead Movement (WLM) in 2017 to put the power of change in the hands of women and girls. The non-profit aims to address the disconnect between the promises of South Africa’s Constitution and the reality lived by girls and women. Transformation, human rights, social justice, equality, and empowerment are the values that underlie all the work done by WLM, explains Melene.

“How do we start empowering women to become change agents in their community if they don’t even understand that they have rights and can enforce these rights?”

Melene sums up the importance of education in a simple question: “How do we start empowering women to become change agents in their community if they don’t even understand that they have rights and can enforce these rights?”

Melene believes this combination of education and empowerment is key to women and girls campaigning for women’s rights, gender equality, and the end of gender-based violence.

The power of women working at the community level

Making sure women are spearheading change in their communities is also a key focus for WLM. They achieve this by working on the grassroots level through women-led forums.

“Women and girls are more effective in their advocacy and other activities when they have organized themselves effectively,” says Melene. “We want to create pockets of these movements in each community and school where we work.” 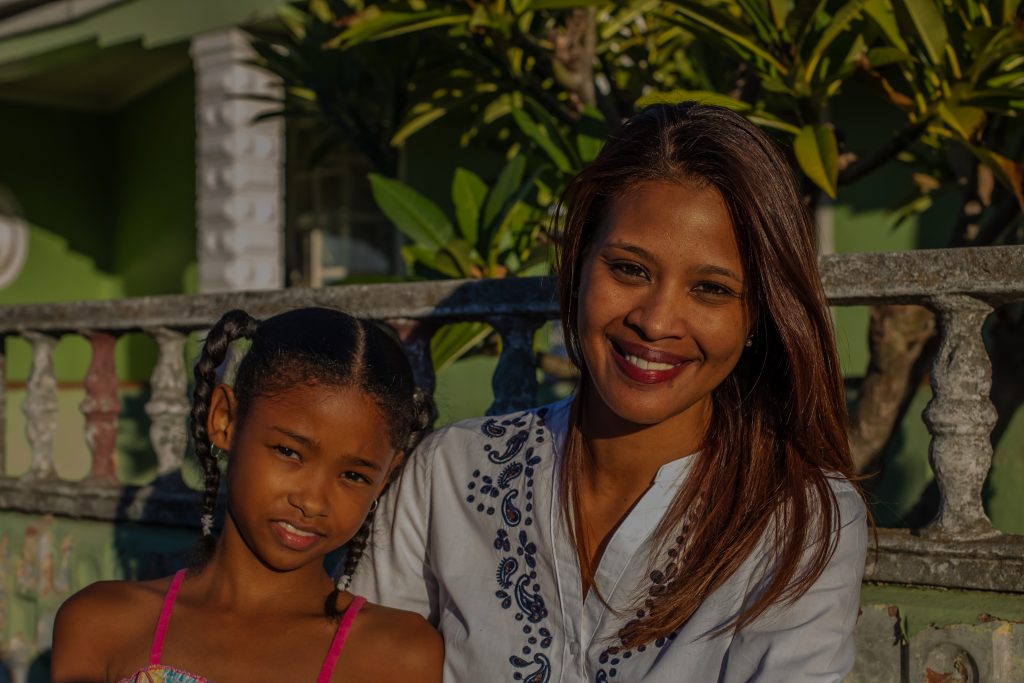 Melene with a family friend, AKA the girl who plays her younger self in the documentary.

WLM focuses on empowering individuals to create lasting change. Changes at the individual level create a domino effect of larger change. When individuals are educated and empowered, the community at large benefits.

“We believe that the solutions to most of these social ills, including the issue of patriarchy and the issue of gender inequality, can only be solved in communities,” says Melene.

Melene’s story is part of our Yours in Power documentary series, which will feature two more activists. Stay tuned for Dr. Joannie Bewa’s story on November 12 and Wadi Ben-Hirki’s story on December 3.