Throughout history and across cultures, women and girls have faced innumerable challenges and injustices. We’re taking a moment to recognize 12 women who overcame adversity, broke through barriers, and changed the world.

Susan B. Anthony was raised in a Quaker family with deep roots in activism and social justice, inspiring her to become an advocate for women’s suffrage, women’s property rights, and the abolition of slavery. In 1872, to challenge suffrage, Anthony tried to vote in the 1872 presidential election and was arrested. While Anthony was never able to legally vote, the 19th amendment, ratified in 1920, was named the “Susan B. Anthony Amendment.”

Dr. Elizabeth Blackwell was the first woman to receive a medical degree from an American medical school after overcoming several odds — including admittance to an all-male institution and financing medical school. In 1856, she opened the New York Infirmary for Women and Children with Dr. Marie Zakrzewska and her sister Emily, who also became a doctor.

They also opened a medical college in 1857, which broadened opportunities for women doctors by providing training and necessary experience, as well as specialized medical care for those living in poverty.

Born in Warsaw, Marie Curie became the first woman professor of general physics at the Sorbonne (sometimes known as the University of Paris) in 1906. She held master’s degrees in both physics and mathematical sciences and was the first woman to obtain a science doctorate. Madame Curie was also the first person to win two Nobel Prizes: the first in physics in 1903, with her husband, Pierre Curie, and Henri Becquerel, for their study in spontaneous radiation, and the second in chemistry in 1911 for her work in radioactivity.

Annelies “Anne” Marie Frank was a writer and one of the most discussed Jewish victims of the Holocaust. Born in Frankfurt, her family moved to Amsterdam when she was 4 years old due to wide-spread anti-Semitism in Germany. In 1940, when the Nazis occupied the Netherlands, the freedom Anne and her family had enjoyed for seven years ended abruptly. They spent two years hiding in an annex, during which time Anne wrote extensively as a means of self-expression and self-preservation. Her family was ultimately discovered and sent to concentration camps.

In 1945, mere weeks before the war ended, Anne died at the Bergen-Belsen camp in Germany. Her posthumously published wartime diary, The Diary of a Young Girl, was an intimate and remarkable account of both adolescence and the Holocaust, quickly becoming a war literature classic.

Ellen Johnson-Sirleaf took office as the president of Liberia in January 2006, becoming the first elected woman head of state in Africa. She signed a Freedom of Information bill (the first of its kind in West Africa) and made reduction of the national debt a cornerstone of her presidency. To investigate crimes committed during Liberia’s civil war, she established a Truth and Reconciliation Commission. As a result, she became a global icon with her commitment to fighting dictators, corruption, and poverty through empowerment of women and girls.

President Sirleaf and two other female leaders (Leymah Gbowee and Tawakkol Karman), were awarded the 2011 Nobel Peace prize for their nonviolent role in promoting peace, democracy and gender equality.

Wangari Muaathai was a Kenyan scientist, professor, and environmental and political activist. She founded the Green Belt Movement, a community initiative that seeks to empower women through civic education and environmental stewardship. She was also the first woman in East or Central Africa to earn a doctorate degree. In 2004, she was awarded the Nobel Peace Prize for her work on sustainable development, democracy and peace, becoming the first African woman and first environmentalist to receive the prize. 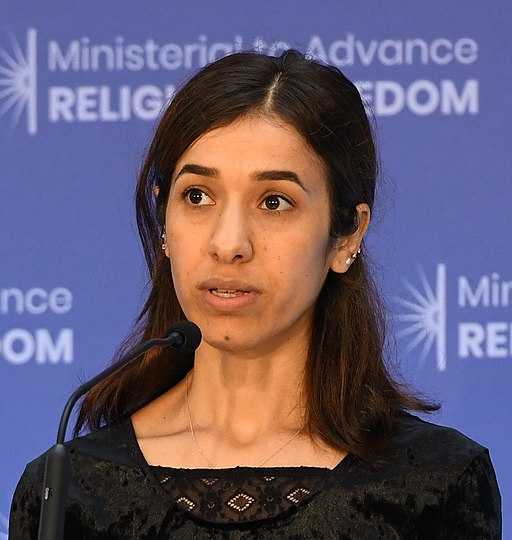 Iraqi Yazidi activist Nadia Murad is a prominent voice in the fight to help women and children affected by war. In 2014, she was kidnapped by the Islamic State and held captive for three months. During that time, she was held as a slave and experienced sexual and physical violence.

After her escape, she became the first person to speak on human trafficking to the United Nations Security Council. She’s also the founder of Nadia’s Initiative, which helps those affected by genocide and human trafficking. In 2018, she was awarded the Nobel Peace Prize, alongside Denis Mukwege, for their work “to end sexual violence as a weapon of war and armed conflict.” She is the first Iraqi and first Yazidi to receive a Nobel Prize.

Shirin Ebadi is an Iranian lawyer, human rights activist, and the first female judge in Iran. After Khomeini’s revolution in 1979, she was dismissed as a judge, but then opened a legal practice to defend people being persecuted by the authorities. In 2000, she was imprisoned for criticizing her country’s hierocracy. She won the 2003 Nobel Peace Prize for her pioneering efforts for democracy and human rights, especially those of women, children, and refugees. She is the first Iranian and first Muslim woman to win the prize. She is currently living in exile in the UK due to increased persecution of opponents of the current regime.

Born in Pakistan, Benazir Bhutto was a political activist from a young age. In 1984 she founded an underground organisation to resist the country’s military dictatorship. Four years later, she became prime minister at only 35 years old, making her one of the youngest chief executives in the world and the first woman to serve as prime minister in an Islamic country.

While in office, Bhutto electrified the countryside, built schools all over the country, made hunger, housing and healthcare her top priorities, and sought to modernize Pakistan. She was assassinated in 2007 while leaving a campaign rally. Her efforts to promote democracy and women’s empowerment are central parts of her legacy.

Dr. Mae Jemison, an American physician, is the first African American female astronaut. She was accepted to NASA’s astronaut training program in 1987. Five years later, she became the first African American woman in space as a science mission specialist aboard the Space Shuttle Endeavour. Before her career at NASA, she worked in a Cambodian refugee camp in Thailand and served in the Peace Corps in Sierra Leone and Liberia.

Rigoberta Menchú — an indigenous Guatemalan woman of the K’iche’ branch of the Mayan culture — has dedicated her life to promoting the rights of indigenous peoples. She became active in the women’s rights movement as a teenager, later becoming a prominent workers’ rights advocate. In 1981, after most of her family had been killed and with her own life in danger, she fled to Mexico, where she continued her resistance work against oppression in Guatemala.

In 1992 she became the first indigenous person to receive a Nobel Peace Prize, in recognition of her work for social justice and ethno-cultural reconciliation for indigenous peoples in Guatemala. In 2006, Menchú was one of the founders of the Nobel Women’s Initiative, a group of female laureates who work together to strengthen women’s rights worldwide.

Malala Yousafzai is a Pakistani advocate for girls education and the youngest-ever Nobel Prize laureate. In 2009, when Malala was just 11 years old, she began blogging about life under the Taliban, speaking out directly against their threats to close girls’ schools. The blog on BBC Urdu garnered international attention, making her the target of death threats.

In October 2012, a gunman shot her and two other girls as they were coming home from school. Malala survived the attack and went on to publish the  autobiography I Am Malala: The Girl Who Stood Up for Education and Was Shot by the Taliban. In 2013, she founded the Malala Foundation to champion every girls’ right to education, and in 2014, she received the Nobel Peace Prize, along with Indian children’s rights activist Kailash Satyarthi.