Robinah Babirye was just 10 years old when her mother told her she was HIV positive.

“My mother took my twin sister and I in her room and told us that we were HIV positive,” she says. “My heart was broken. I felt like my life had come to an end. I asked myself many questions that I never got answers to.” 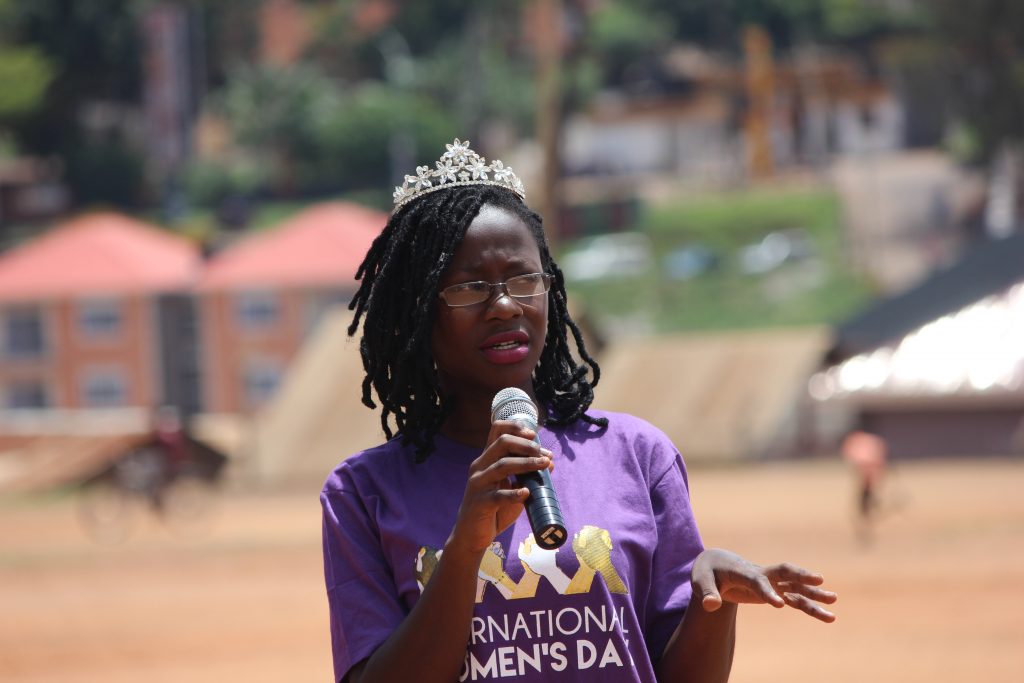 Robinah speaking to the women of Kikubamutwe slum in Kampala during the Women’s Day 2016 celebrations.

As she got older, Robinah kept her HIV status a secret at school out of fear of rejection.

“Because I couldn’t trust anyone, I turned to my journal,” she says. “I wrote down things I couldn’t tell even my mother. I wrote my pain, my joys, and every time I finished writing, I felt better.”

Like many in her generation, Robinah turned to Facebook. One morning, she decided to send a message that she would not be beaten: It was time to tell the world about her status. She put on a t-shirt that read, “HIV Positive,” took a photo, posted it on her Facebook page, and waited in trepidation for the responses.

“People contacted me and encouraged me. Some were other young people living with HIV who were amazed at my audacity,” she says. “I got phone calls from friends that were feeling sorry for me and those that were mad at me for making such a joke.” 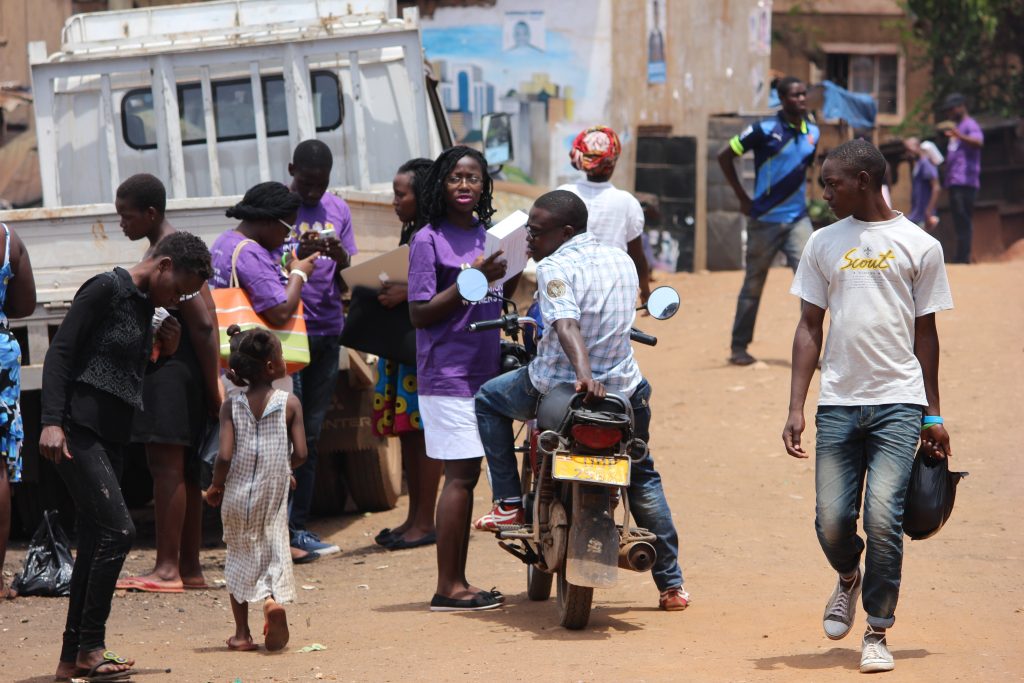 Robinah distributing condoms to people in Kikubamutwe in Kampala, Uganda.

That was the beginning of Robinah’s journey as an HIV/AIDS ambassador. Emboldened, a few months later, she joined a support group of young people living with HIV who would meet and share their stories. This was an opportunity for her to share her own, giving her the strength she needed to feel like she could move forward with her life.

“I now had purpose,” she says. “I was full of life and I was ready to conquer the world.”

In 2014, Robinah heard about a Miss Young Positive beauty contest organised by the Uganda Network of Young People Living with HIV. She knew that declaring her status on such a public forum could be either a blessing or a curse—but she went for it anyway.

“I decided to enter the contest for Miss YPLus 2015. The contestants were prettier than me and they had these amazing projects they were doing,” she says. “But I just presented myself as I was, and I won! This was the happiest day of my life.” 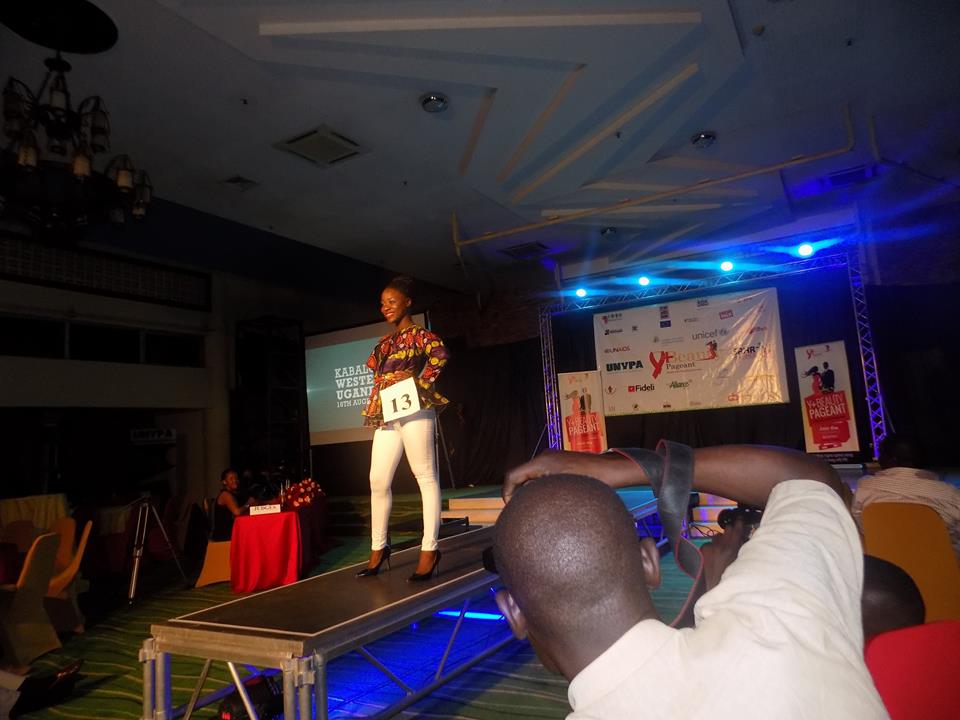 Robinah, now 23, has been unstoppable ever since. She’s shared her story at countless conferences in Uganda, and traveled to Australia to speak to an audience of about 15,000 people during the 2014 AIDS conference. She was named Young Personality of the Year by the World Savers Network, and spoke at the ICASA AIDS conference in Zimbabwe. Many young Zimbabweans followed her after the conference to ask her how she manages to be that courageous.

“I told these young Zimbabweans that regardless of my HIV status, I have chosen to be happy,” she says.

She is currently pursuing a Bachelor’s degree in community-based rehabilitation at Kyambogo University in Uganda. After college, Robinah says that she would like to reach out to young, HIV-positive mothers.

“My life’s mission is to fight stigma against people living with HIV,” says Robinah.

“I keep going because many young and old people have approached me to confide in me,” she says. “I get countless phone calls from strangers and this makes me feel like I am a change agent.” 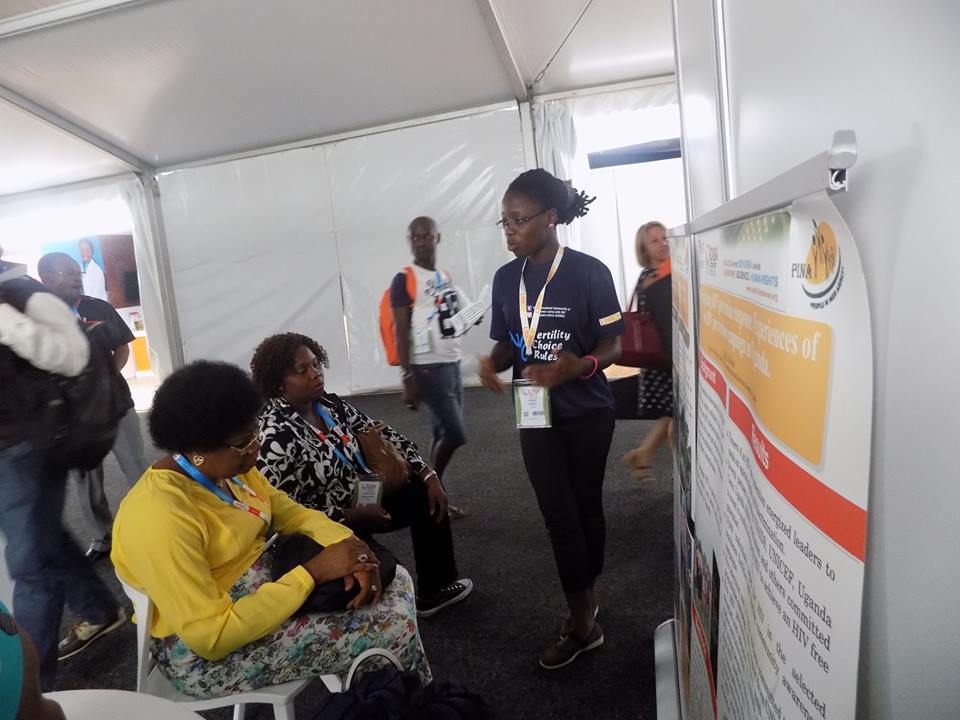 Robinah at the ICASA Zimbababwe conference.

Asked whether she had a message for people reading her story, Robinah said: “Life is not simply about living; it is about how you live it. Don’t dwell on the past; use the present to create a foundation for the future. It is entirely up to you to determine how firm your foundation will be.”

Everyone can appreciate those wise words from a determined woman who has already done so much to change her own life, and those of countless other people living with HIV.

Want to know what you can do to help girls and women like Robinah? Join ONE today to help end extreme poverty!