Our guest blogger today is William Richards, a ONE Youth Ambassador from the UK. 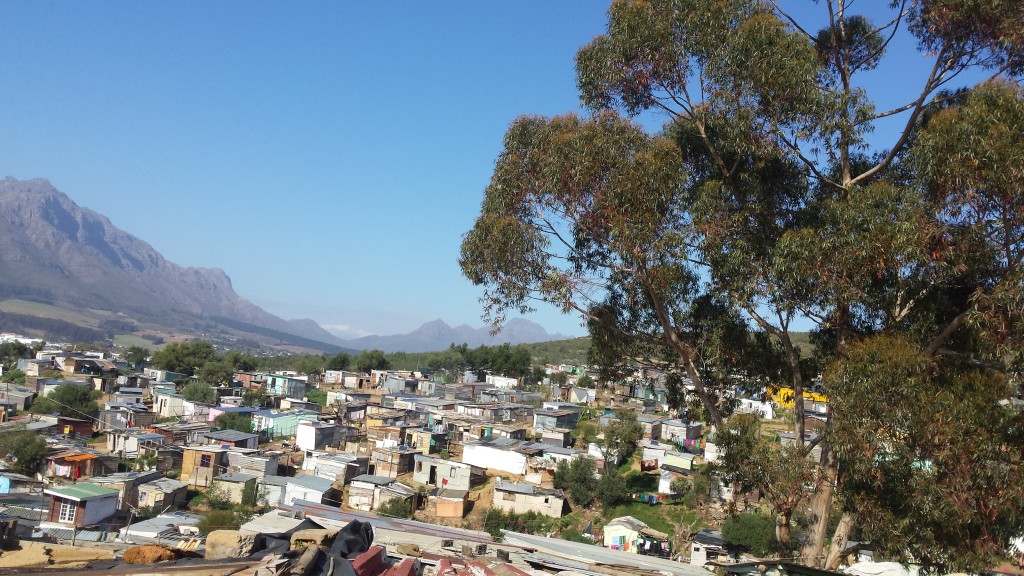 This past July I spent my summer holiday in South Africa doing some volunteering and sightseeing. My school organised the trip, and whilst it was enjoyable to see the sights – Table Mountain and Robben Island were incredible; the most interesting parts were not the things we paid for.

In fact, there were three things which stood out: the overwhelming sense of community, people’s determination; and their sustainable living.

Sustainability
During my trip I stayed in a ‘sustainability institute’. This is essentially a multi-racial community where everything from building houses to getting rid of wastewater is, as you may have guessed, done sustainably.

The institute provides local people with an opportunity to own their own properties, so long as they build and maintain them sustainably. Which is surprising considering we live in an era where development and climate change are often seen to be at odds with one another. In this place it works: it helps people out of poverty without harming the planet. 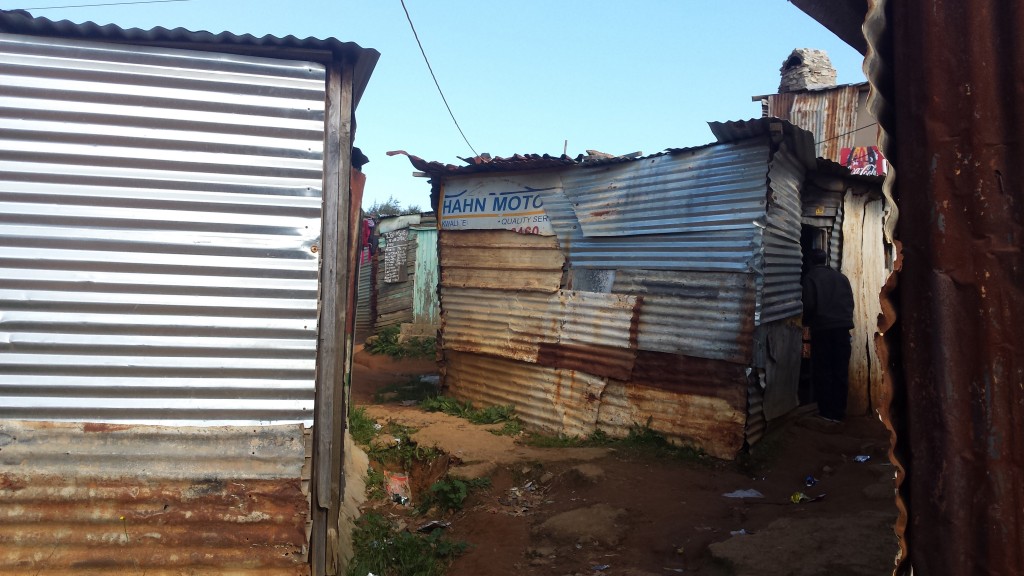 Community
Although, it might seem frivolous to suggest community is the main thing I noticed when visiting a township; it isn’t. The atmosphere running through Kayamandi township made me feel as though I was at a bizarre music festival. Wherever we walked we were greeted and music could be heard booming from the houses.

Not surprisingly, I didn’t end up feeling intimidated as I thought I would; and the sight of people playing musical instruments against the backdrop of blatant poverty was something more meaningful than anything I’ve seen before.

I don’t, however, wan’t to seem as though I’m undermining the seriousness of their situation.  It’s certainly far from ideal.  However, it did show me the ‘strength of human resilience in the face of adversity’. Which, embarrassingly is something – in my middle-class UK bubble – that I’d never properly witnessed until that moment. 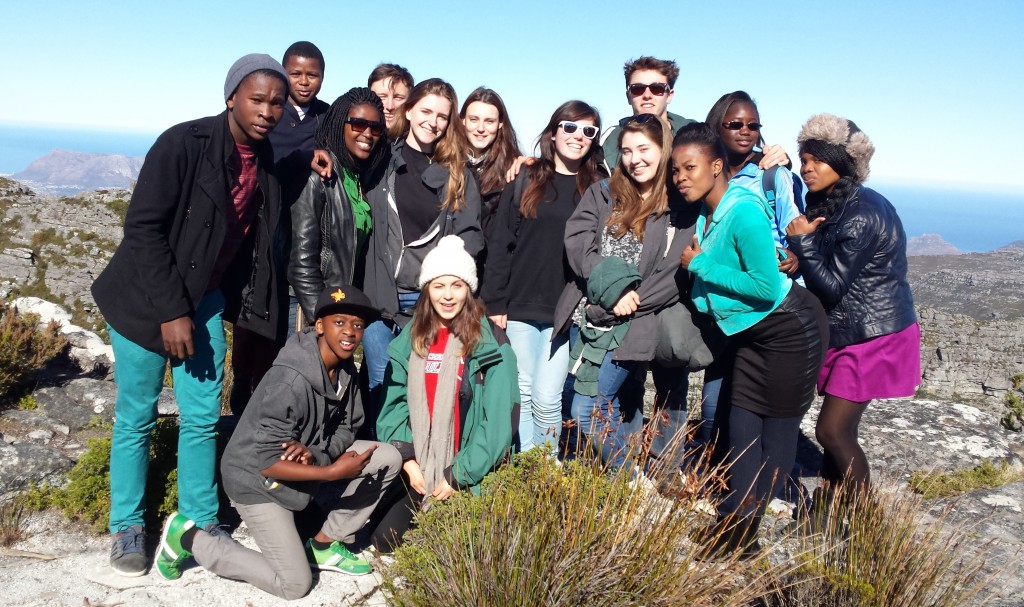 William (4th from right) with students from the UK and South Africa at Table Mountain. Photo: William Richards

Determination
The most interesting part of the trip was taking part in workshops with students from Kayamandi school. I ended up in the strange position of having to lead public speaking sessions with people far more able than myself. It was plainly obvious when they began freely quoting Shakespeare; let alone when they performed their speeches… 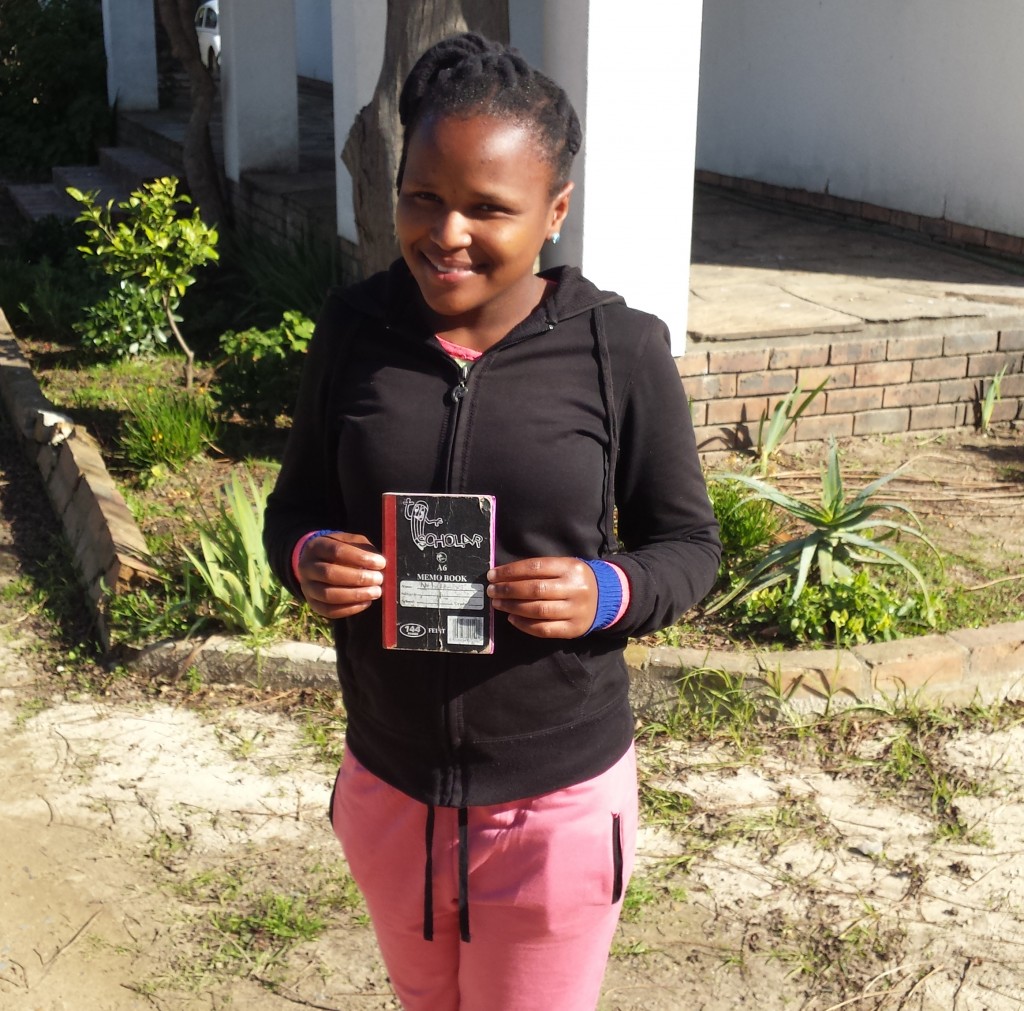 Nthateng Machaea with her book of poetry. Photo: William Richards

They were all impressive, but, there was one person who stood out to us. Her name was Nthateng (pronounced Nu-ta-dayne); and she performed a passionate speech about the transition from Apartheid to the recent day. She said ‘It is by no means perfect’ but the situation now feels as though, in her own words, – ‘it’s good to be African’.

She is part of a poetry club and despite her circumstances (her mother moved away when she was young, and she has had to move miles across South Africa for a better education) she is very determined to be successful in something creative.

Her poem, My Voice, articulates everything ONE stands for – it’s all about the power of your voice. 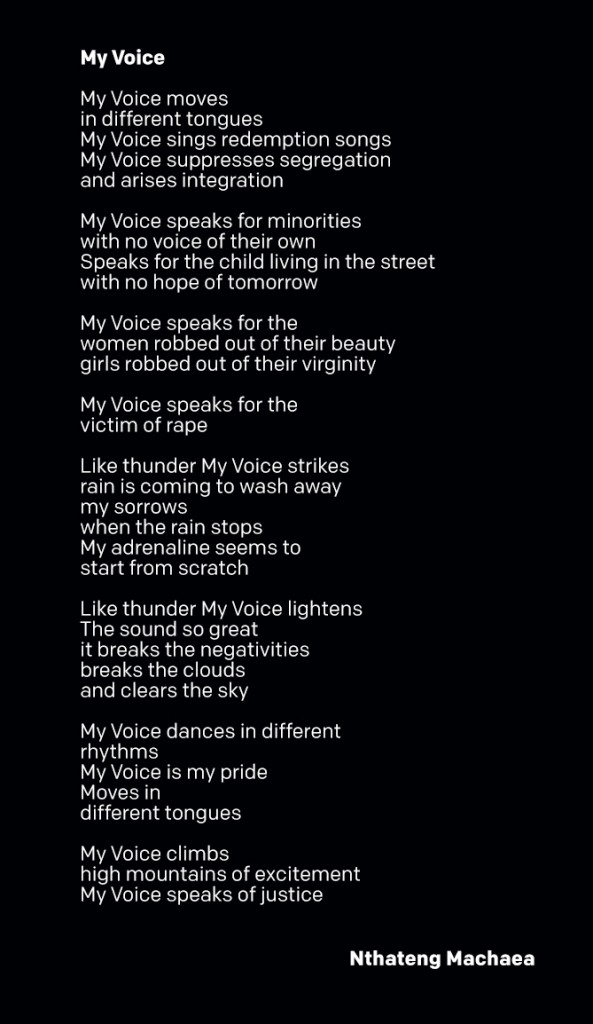 Let us know what you think of Nthateng’s poem in the comments and we’ll pass it on to her!