Written by Ricci Shryock, a writer and photographer based in Dakar, Senegal. 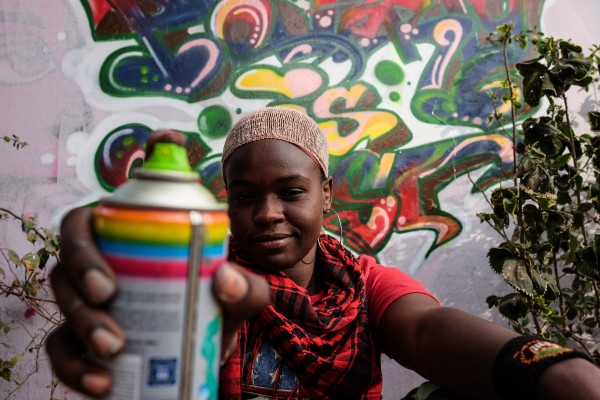 24 year-old Dieynaba Sidibe is Senegal’s first female graffiti artist. She recalls her teenage years when she first told her parents that she wanted to be a graffiti artist. “It was war,” she says. 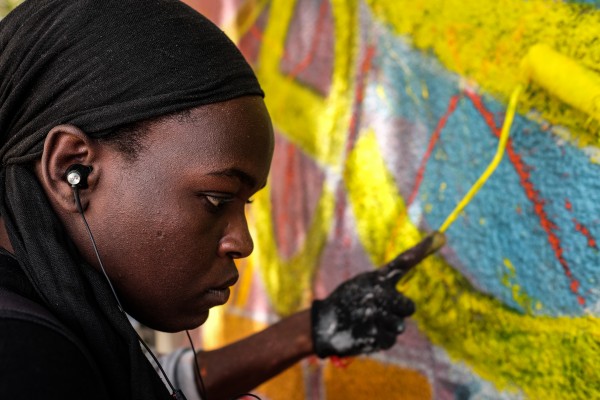 From a young age, Dieynaba loved painting and used her pocket money to buy art supplies. So she was dismayed to come home one day to find that her mother had thrown out all her paints.

Her mother didn’t believe women should paint and instead wanted her to be a doctor. Reflecting on this Dieynaba says, “Society has created a place for women, and when you try and go outside of that, there’s a problem.” 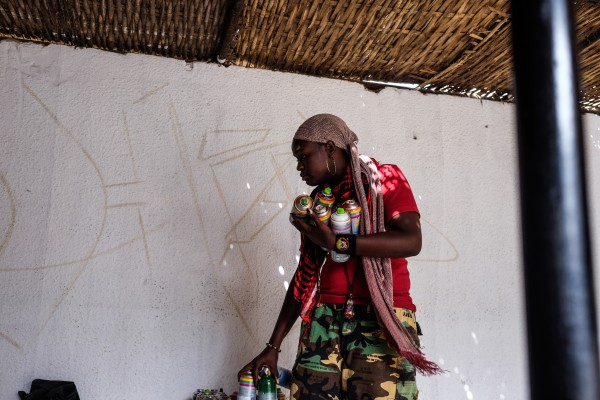 Dieynaba sketching out her painting at the Africulturban Centre in Pikine. Photo: Ricci Shryock/ONE

Eventually, when she was 18 she moved on to graffiti. “I started to paint graffiti in 2008 because I found I could express myself better on a wall as there was more space than a canvas.” 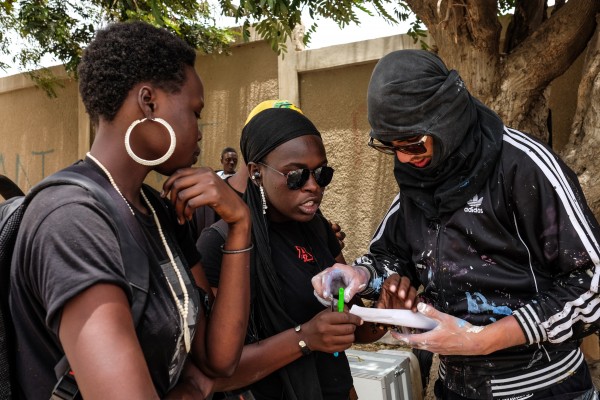 At Senegal’s Festigraff festival, Dieynaba helps organise artists from all over Africa, Europe and the US to paint murals in a suburb of Dakar, Senegal. Photo: Ricci Shryock/ONE.

In West Africa, graffiti is an art-form frequently used as a tool of expression for social change. Dieynaba, whose artist name is ‘Zienixx’, uses it to promote women’s rights, despite her parents having forbidden her from practising graffiti art.

“I want to express many things. The difference between painting graffiti and painting on a canvas is when I painted on a canvas it was just because I wanted to paint, but now with the graffiti, I’m more into social messaging. Women are marginalised in society,” she continues, “I think my art can help people understand.” 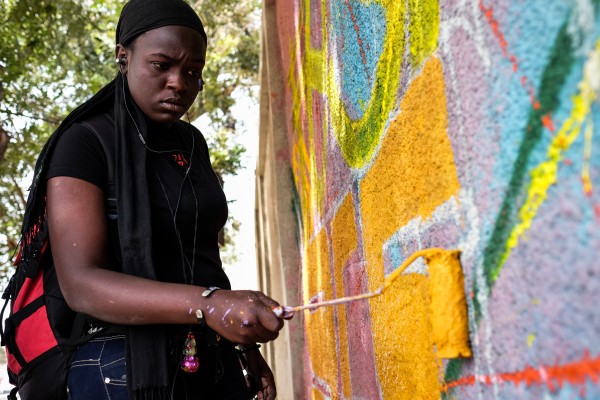 She said graffiti can help convey a message and pointed towards a recent piece of hers with just two simple words: “Woman’s Life”.

With this Dieynaba wanted to show solidarity for women, because “all women, everywhere, whether they are fishmongers, graffiti artists or office workers, we are all fighters. Women are fighting to be free to do what they want, to do work that pleases them, to be paid equally to men, and to follow their passion.” 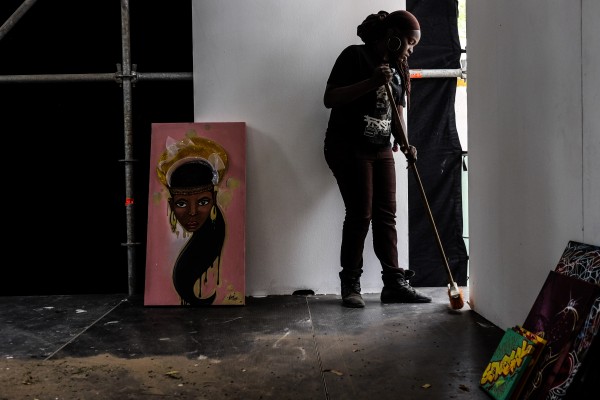 Dieynaba learned how to paint graffiti from fellow members of the hip-hop community at the Africulturban Center outside Dakar. President of the centre, Rapper Matador (Babacar Niang) recounted, “she was really interested in hip hop culture, slam poetry, and graffiti. It was a little surprising because she was a woman. It was new for me, because after 20 years, the only women we had here were interested in rap, and she was interested in graffiti as well.”

Unlike Dieynaba’s parents, Rapper Matador thought that her interest and desire to break barriers was a good thing. “I thought that she could bring something new into hip hop culture, because people thought only men were doing graffiti.”

“With graffiti she can show the role of women in society. If it’s coming from a woman it’s even stronger. Usually people don’t pay attention to issues. But when you walk in front of her graffiti it calls on people to think about these things,” he says. 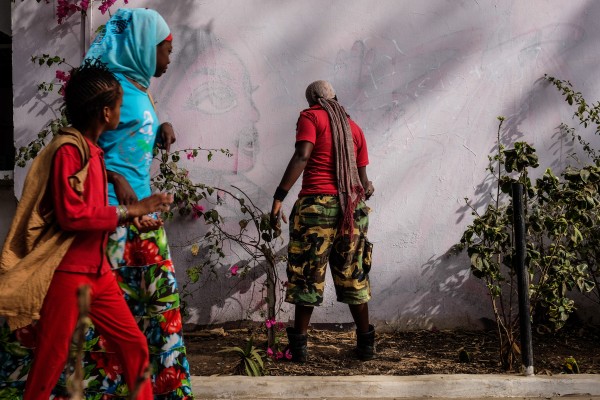 Dieynaba hopes her art can shed light on the hard work of women in the country. Matador agrees: “There are so many families in Senegal, whose mothers keep them together. These women wake up at four in the morning to go to the market and sell fish, and with the money they make they buy food and make a meal. The young men are asleep that whole time, so they wake up and find food they have no idea what their mothers went through to get that meal on the table.” 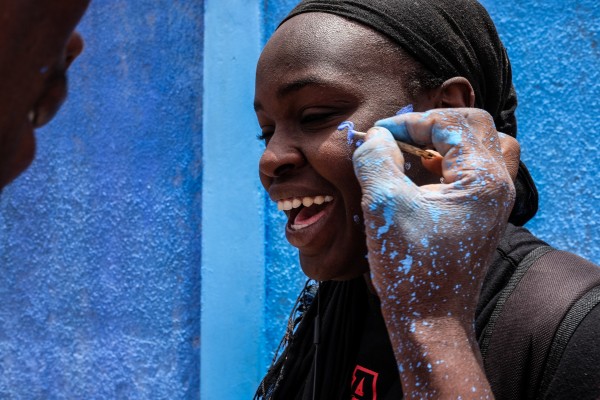 Dieynaba gets her face painted by a fellow graffiti artist. Photo: Ricci Shryock/ONE

Dieynaba reflects on the battle she won with her family – who now support her graffiti – and the battle women in Senegal have won for their rights when it comes to access to education and more.

“What we can say in general is that if it’s a war, women have won a large battle. They can express themselves – you find women in offices, women doctors, women in the military, you see them a bit everywhere.”

But, she adds,“One thing that should be spoken about is salary inequality – it’s not right that a man and woman can have the same education and capacity but receive a different salary at the end of the month. Work remains to be done, the fight will always continue.” 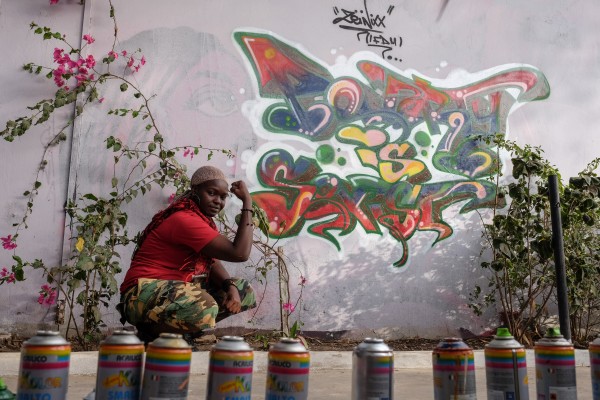 Dieynaba Sidibe strikes a #strengthie pose next to her artwork of our “Poverty is Sexist” slogan at a hip-hop artists’ centre in Dakar, Senegal. Photo: Ricci Shryock/ONE.

We won’t end extreme poverty until we break down the barriers holding girls and women back. Add your name to our #PovertyIsSexist letter now.