This story by Remy Tumin originally appeared in full on TakePartWorld on Dec. 2, 2015.

Shortly after Aisha gave birth at home near Kano, Nigeria, the mother of nine began to severely bleed, went into shock, and was taken to the nearest hospital.

With blood pressure too low to even record, time was of the essence to make sure Aisha did not become one of the countless women who die due to postpartum haemorrhage. The midwives quickly applied a LifeWrap on Aisha.

Aisha’s blood pressure immediately increased and gave her the four hours necessary for blood to arrive and the cause of her excessive bleeding to be treated.

The LifeWrap acts as a first-aid device to stabilise women who suffer from postpartum haemorrhage to stop the bleeding before it’s too late. (Photo credit: Maternova/Facebook)

This is a typical scenario for many new mothers in developing countries who suffer from postpartum haemorrhage, the leading cause of maternal mortality. Now the LifeWrap is making great strides in reversing the mortality rate in these countries.

Made of neoprene and Velcro, the wet-suit-like garment is cut into segments. The LifeWrap acts as a first-aid device to stabilise women like Aisha who don’t have access to resources to stop the bleeding immediately. The low technology keeps women alive while they travel to a hospital for surgery or wait for treatment.

To date, LifeWraps have been used on more than 10,000 women in 33 countries. According to the American Congress of Obstetricians and Gynaecologists, a woman dies every four minutes from postpartum haemorrhage.

Suellen Miller, a nurse-midwife and professor in the obstetrics and gynaecology department at the University of California, San Francisco, developed the garment. Miller has been working in international maternal health since the mid-1980s. That’s when she first encountered the dire situation around the world.

“Women were dying of haemorrhaging and there was just no change, it was always the same,” she says. “It was the leading cause of maternal mortality and even though new drugs came along that helped, women who went into severe shock still died.”

“It was really dispiriting,” she says.

That’s when Miller was introduced to a doctor from Stanford University who was using something called a non-pneumatic anti-shock garment at a hospital in Pakistan without a blood bank. The garment worked off a model originally designed by a female astronaut at NASA; it had been used on injured soldiers in Vietnam, but required external devices to compress against injuries. This newer version was a simple wrap.

Four years later, Miller and her team at the Safe Motherhood Program at UCSF headed to Nigeria and Egypt to begin a clinical trial with their own version of the anti-shock garment.

“I was able to move the needle forward and get some funding to do the first of many trials in order to prove that this device worked,” she says. “It was really simple and very compact compared to the pneumatic system.” 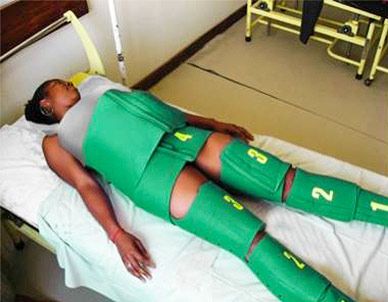 Miller and her team of doctors had incredible results that showed drastic reductions in maternal mortality by 50 percent!

“That’s unheard of in obstetrics,” she says. “And with something so simple and easy to use and reusable.”

The LifeWrap interrupts the bleeding process and allows the body time to clot. When women are pregnant, the uterus is filled with blood vessels to supply blood to the baby. After delivery, the uterus contracts to put pressure on the blood vessels to stop the bleeding, just like a cut. But sometimes the uterus doesn’t contract down and bleeding continues, which can lead to organ system shutdown and death. Medication can help contract the muscles, but that’s not always available in developing countries.

In countries such as the U.S., there isn’t the same need for devices like LifeWrap. If women do haemorrhage, accessible drugs and surgery are usually an easy remedy.

“The big difference is surgery—where in the U.S. you wait maybe 20 minutes or an hour at the most,” says Miller. “And in some of these countries like rural Ethiopia, it’s days between a woman going unconscious and surgery or blood transfusion. This device keeps blood in the heart, lungs, and brain and will make a huge difference.”

When trained, two people can have a patient wrapped up in 10 seconds flat. The effects are almost immediate, Miller says.

“The bleeding slows down and if she’s unconscious, she regains consciousness within 15 minutes,” she says. “Anybody who sees it being used can then use it themselves. It’s much more simple than the military device.”

The garment is washable and can be used up to 142 times. It costs about $45. Districts or municipalities can order LifeWrap and purchase directly from the manufacturer; others have received funding from international agencies including the Clinton Health Access Initiative and the WHO. Individual practitioners can order them as well.

Miller and her team train clinicians around the world on how to use the garment and give presentations to departments of health and professional associations. Miller plans to travel to India in January to conduct training. The last five years have seen exponential growth for LifeWrap.

“I’m a clinician and a scholar, to do really rigorous clinical research and have an effect like this, it’s like a dream,” says Miller.

Remy Tumin is a New York journalist who has written for Brooklyn Magazine, the New York Nonprofit Press, and the Vineyard Gazette.

If you believe efforts to reduce maternal mortality rates in developing countries are a vital cause – raise your voice for Global Goal 3: Good Health and Well-Being.