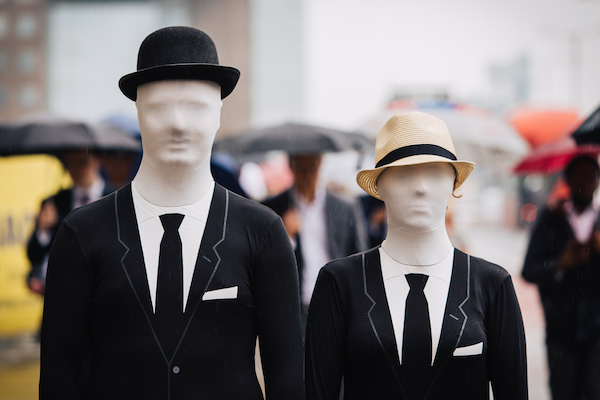 NAME THAT FACE . . . Dressed in mock business suits, bowler and Panama hats, activists dressed as faceless financiers from the pressure group the ONE Campaign mingled with commuters on London’s busy streets yesterday to draw attention to the International Anti-Corruption Summit being hosted by UK Prime Minister David Cameron later this week (THURS).

“The International Anti-Corruption Summit must turn the tide in the fight against corruption.

“Delegates should sign up to a united crackdown on anonymous company and trust ownership. They need to enshrine greater transparency by agreeing to publish registers of who actually owns and benefits from the activities of shell companies.

“They need to fix the flawed global financial system which individuals exploit to hide their ill-gotten cash behind a wall of secrecy right under our noses, including in British Overseas Territories.”

Lovett added: “We applaud Mr Cameron for calling the summit. He must now lead by example.

“Calling some of the countries attending the summit ‘fantastically corrupt’ might be justified. But some of Britain’s own overseas territories have been fantastically obliging to them.”

“The summit has to end with meaningful results. We must see action. Anything less will be short-changing the millions around the world who endure extreme poverty every day because of the corrosive effect of corruption.”

Adrian Lovett is attending the Anti-Corruption Summit and is available for interviews before, during and after the event.

The ONE Campaign is calling for policies that boost the fight against corruption and end the Trillion Dollar Scandal. Developing countries have at least $1 trillion siphoned out of them each year, because of secrecy and flaws in the global financial system. To end this scandal, ONE is calling for:

ONE is a campaigning and advocacy organisation of more than 7 million people taking action to end extreme poverty and preventable disease, particularly in Africa. Not politically partisan, we raise public awareness and press political leaders to combat AIDS and preventable diseases, increase investments in agriculture and nutrition, and demand greater transparency in poverty-fighting programmes. To learn more, go to ONE.org.