BRUSSELS, 14 JULY 2016 – Today, EU Commissioner for International Cooperation and Development Neven Mimica and ONE Youth Ambassadors stood side by side in the kitchen, learning to cook a nutritious meal. This unconventional meeting highlighted the importance of nutrition, especially in the poorest countries, and what the EU can do to fight hunger and malnutrition. 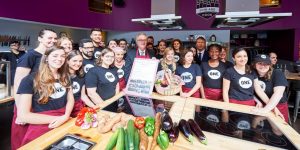 “Under-nutrition is a hidden human tragedy: it is not visible and is often poorly recognised, but 3 million children die from it every year. That’s why it’s great to see so many Youth Ambassadors involved in this initiative today – young people have a vital role to play in helping to raise awareness of the importance of a nutritious, balanced diet, in our partner countries.”

Commissioner Mimica alongside 20 ONE Youth Ambassadors – young activists who campaign to end extreme poverty – learned from an experienced chef at the cooking school Mmmmh! how to prepare 2 African-inspired nutritious dishes.

The meals were made with ingredients produced and available across many developing countries Like the sweet potato: full of essential nutrients, very high in vitamin A, and a powerful source of energy against poor nutrition. These dishes helped illustrate the possibilities for and importance of a balanced and nutritious diet.

This is especially important in developing countries, where close to 3 million children die each year due to causes linked to malnutrition. As they cooked and shared the meal, the Youth Ambassadors learned about what the EU is doing to tackle malnutrition and gave ideas for how it can scale up to help reach the Global Goal of zero hunger by 2030.

“Malnutrition is linked to nearly half of child deaths under 5 years old. I find that outrageous, and today we had the great opportunity to share ideas and solutions with EU Commissioner Mimica. We agreed that many of these deaths can be prevented by improving basic nutrition in the poorest countries. This means the EU and other governments must urgently step up funding to nutrition-specific programmes.”

HD photos of the event are available here.

Youth Ambassadors are available for interviews in EN/FR/NL

ONE Youth Ambassadors are a dedicated team of volunteers, chosen through an open application process, who campaign to end extreme poverty across Europe. They engage decision makers, work with the media to raise the profile of ONE campaigns, and encourage the public to support ONE petitions and other actions through online activity and local events.

The 2016 group is campaigning on nutrition, transparency, development and health to help ONE achieve the goal of ending extreme poverty by 2030.

ONE is an international campaigning and advocacy organisation of over 7 million people taking action to end extreme poverty and preventable disease, particularly in Africa. Not politically partisan, we raise public awareness and press political leaders to combat AIDS and preventable diseases, increase investments in agriculture and nutrition, and demand greater transparency in poverty-fighting programmes. Read more at www.one.org.

About the European Union’s work to fight undernutrition

The EU has committed to supporting partner countries to reduce the number of stunted children by 7 million by 2025 and earmarked €3.5 billion for nutrition between 2014 and 2020.  It has played a major role in nutrition, as a key contributor to international initiatives such as the Scaling-Up Nutrition Movement (SUN), which was launched by the UN Secretary General, Ban ki Moon, to mobilise the political will to place nutrition higher up the global agenda. So far 56 developing countries have joined.  On a country level, the EU is supporting more than 40 countries, where the highest rates of stunting can be found, in their fight against malnutrition.