Ms. Alemayehou’s career spans both the public and private sector across emerging markets with a strong focus on Africa. She is currently Senior Vice President for Public–Private Partnerships at Mastercard Inc.

Prior to joining Mastercard, Ms. Alemayehou was the Managing Director and a member of the Board of Directors for Black Rhino Group, (a portfolio company of Blackstone) an investment platform focused on the development and acquisition of energy and infrastructure assets across Africa.

Previously, she was appointed by President Obama as Executive Vice President of the Overseas Private Investment Corporation (OPIC), the development finance agency of the U.S. Government. In this capacity, she oversaw the extension of loans, guarantees, and insurance to catalyze foreign direct investment and private equity into emerging markets. Prior to OPIC, Ms. Alemayehou was appointed by President George W. Bush to serve as the United States Executive Director on the Board of Directors of the African Development Bank (AfDB).

Ms. Alemayehou holds a Masters degree from the Fletcher School of Law and Diplomacy at Tufts University and a BA in Marketing from West Texas A&M University. 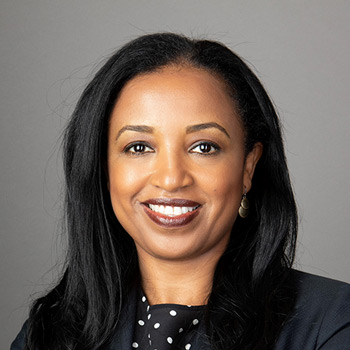