This guest post is by journalist Abby Higgins, in partnership with The Seattle Globalist. It’s the fourth in a five-part series which reveals the economically complex and culturally rich life of urban slums, and challenges our perceptions of what life is like for the one billion people around the world that live in them. Read Part One,  Part Two, or Part Three. 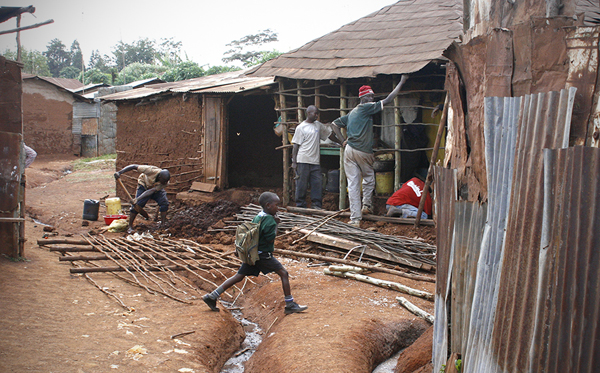 Mildred Lunani knew that if she stayed in her village in Western Kenya she could pretty much count on a life of poverty.  So, like the 200,000 people around the world who move to cities from rural areas every day, she came to the capital in search of opportunity. She found that opportunity in Kibera, the slum that her and her family now call home.

She opened up The District Commissioner’s Restaurant, a small place named after the police station next door. Equipped with a window for take away food and a few rickety wooden tables, she offers donuts, samosas and sodas to the flood of people passing by on their way in and out of Kibera each day.  Lunani was also trained as a community health worker by an NGO in Kibera and spends several days a week working to spread awareness about HIV and AIDS.

“Kibera is a good place. The community, the people, my neighbours, they mean a lot to me, I love that part of Kibera.  But the housing, some of the housing isn’t fit for humans. The toilets, the water?” She shook her head in disgust.

In 2009, Mildred learned of an opportunity to move her family out of Kibera’s substandard housing: The Kenya Slum Upgrading Project (KENSUP) launched by the Kenyan Ministry of Housing with the support of UN-Habitat and several other donor organisations. 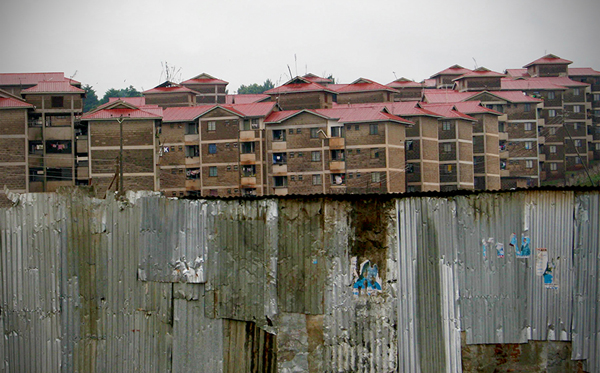 The flagship of KENSUP rises up behind Kibera, a goliath multi-storied concrete building called The Promised Land by local residents. The apartments inside are heavily subsidised and provide the formalised services that slums lack like water, sanitation and electricity.

Mildred and her family now call the building home, at least in the short term. The building is a temporary residence until more permanent housing is completed in Soweto East, a neighborhood in Kibera.

“The plan is good,” says Mildred, “If the government continues, then the rest of the slum can be upgraded. This could change the whole lifestyle of Kibera.”

But from the launch of the project in 2003, there has been a nagging problem.  Residents who were relocated to The Promised Land began leaving their new homes and moving back into Kibera.  Nairobi’s middle class swooped in, searching for affordable housing in a city with skyrocketing rents. Many secured apartments in the new buildings through the informal systems of bribery that dictates a great deal of life in Kenya.

And many Kibera residents who were given apartments through the programme saw a business opportunity and rented their flats to middle class tenants at four and five times the subsidised rate. Then they moved back to the slum with extra money in their pocket.

Other residents said they were frustrated by the unreliable services in the new apartments and flat out left. Mildred hasn’t had water in her house for three weeks. Ironically, some are moving back into the slum for better water and sanitation. 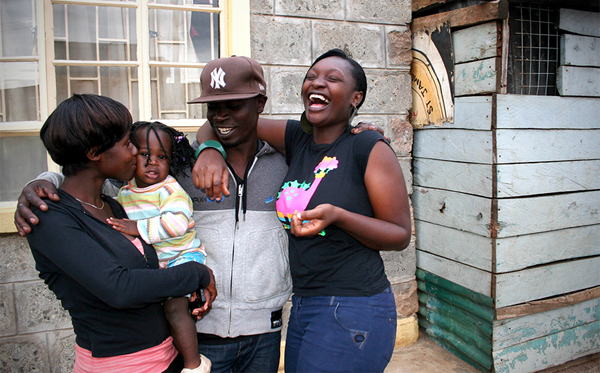 Family Halima, Richie and Leslie outside their home in Kibera. Despite lack of access to government services, many residents in Kibera stay because of the strong community and support neighbours. Photo: by Abby Higgins

There is a great deal of mistrust of the government and development organizations in Kibera. A history of failed aid projects and forced evictions have left many residents feeling exploited by outsiders.

Mildred says she’s just waiting to hear if and when they will be moving into their permanent housing.  Each day she leaves her new home early in the morning and walks back into Kibera. She opens her restaurant and then makes her rounds as a community health worker.

At the end of each day, she picks up her groceries in the slum, where they are much cheaper than in The Promised Land, and makes the long walk back to the new development.  She even spends her weekends in her old neighbourhood, visiting her friends and neighbours who still live there.

While she doesn’t miss the housing, she does miss that part of life in Kibera. She’s lived in her new housing for three years and doesn’t know any of her neighbours.  High crime rates, the lack of sanitation and the poor housing are a constant struggle for Kibera residents. But Lunani’s experience points to the intangible value of the community in the slum.  The social networks, the business, the employment opportunities and the low cost of living attracts new residents, despite the harsh circumstances.

At the pace KENSUP is going, it’s hard to believe that the planned upgrade of the entire slum will ever be complete.  But it’s harder still to imagine that Kibera residents like Mildred will ever feel at home in the monochrome, concrete stacks of The Promised Land.

Residents are under pressure from local authorities not to discuss any failures of the housing projects in Kibera.  Mildred was happy to speak to The Seattle Globalist but was not photographed to protect her identity.

Check back next week for the fifth and final part of our series.