We’ve been busy at ONE these last few months. As the crises of climate, COVID-19, conflict, and their economic aftershocks threaten our future, we refuse to fall into despair. Instead, we took action as part of the GenerAction movement, asking world leaders to do what it takes to tackle the crises we’re facing.
​
With our amazing ONE Activists, we toured dozens of cities and held stalls, joined festivals, and played games. We met with politicians, mobilised people in our communities, and organised street actions to deliver our GenerAction message. We collected thousands of postcards to deliver to decision-makers ahead of the G7 summit. And we had fun!
​
There were many highlights during the roadshow, but we’ve tried our best to bring you our favourites. Here’s our top 10:

​1. Chanting with football fans in Turin

In Turin, we met with Barcelona football supporters who were attending the UEFA Women’s Champions League final. As the crowd of fans flooded the city chanting, we joined in! Dozens of fans also supported our campaign by writing postcard messages to G7 leaders.
​

​
​2. Our tube ads got noticed in London

We put ads all over Westminster tube station, near the UK Parliament, to get our message straight to politicians.
​
As we met with Members of Parliament, we saw the impact first-hand. Many told us they had seen our ads and one official even said that the government heard us “loud and clear.” Clear proof our ad campaign was effective!
​
​ 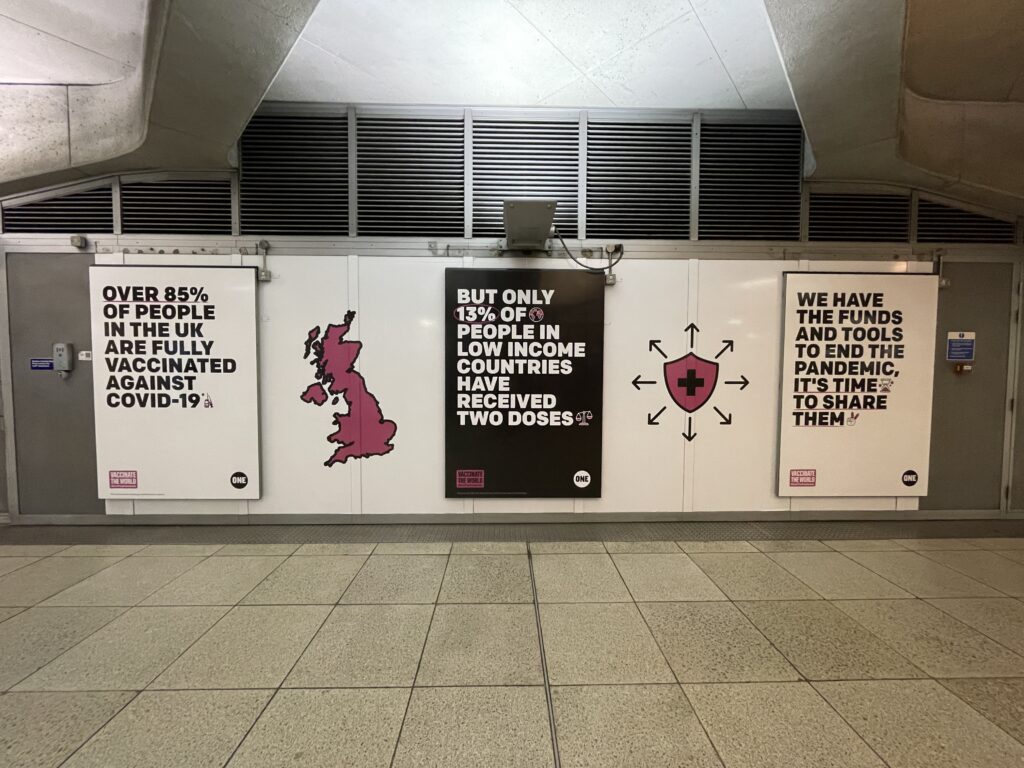 ​3. Getting a shout-out on stage during a French music festival

At the beginning of summer comes festival season, and we sure wanted to join the fun! At the El Dorado festival in the south of France, ONE Activists met with many of the artists who were performing. They signed our postcards and — the cherry on the cake — one of them even gave us a shout-out live on stage!
​

​
At the Solidays festival, ONE Activists met Anne Hidalgo, the mayor of Paris, and also talked to hundreds of festival-goers, many of whom enthusiastically signed our petition. And our tour of France is not over yet, as we’ll join more festivals in the months to come. Stay tuned via our social channels.

What’s one of the best ways to make sure your message gets noticed? Print it on giant postcards people can’t ignore! We carried them across Europe’s biggest cities. They went to the Eiffel Tower in France, the UK Parliament in London, and also many politician’s offices. They even reached Ottawa, Canada and the White House in the US.
​
​ 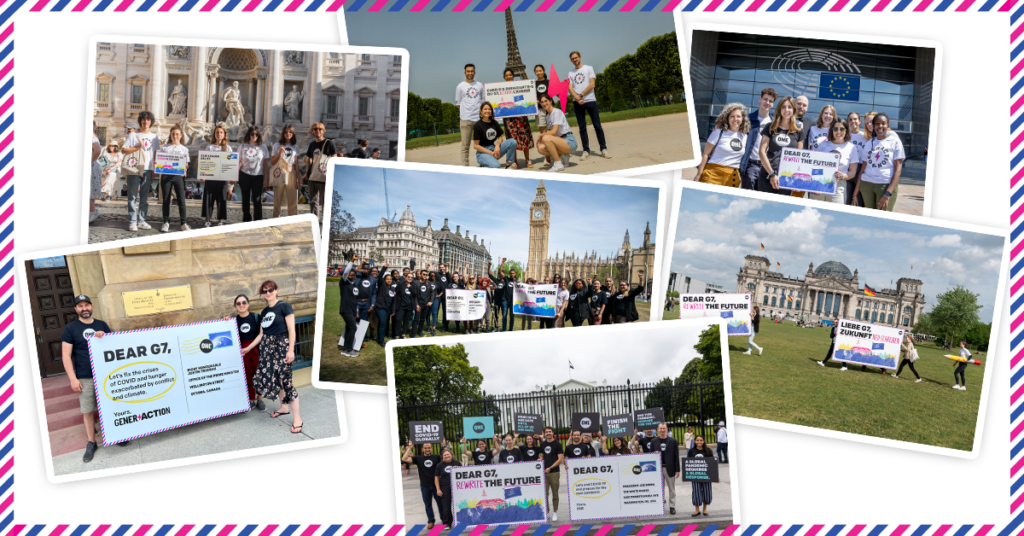 ​5. Chasing down a German minister

In May, when the G7 ministers met in Germany, we organised a street action in front of the building where the discussions were taking place.
​
As we were ending our demonstration, we spotted Svenja Schulze, the German minister for development. We ran towards her so we could speak with her — all the while carrying our giant postcards. Luckily, we met and even ended up taking a picture with her and Health Minister Karl Lauterbach. 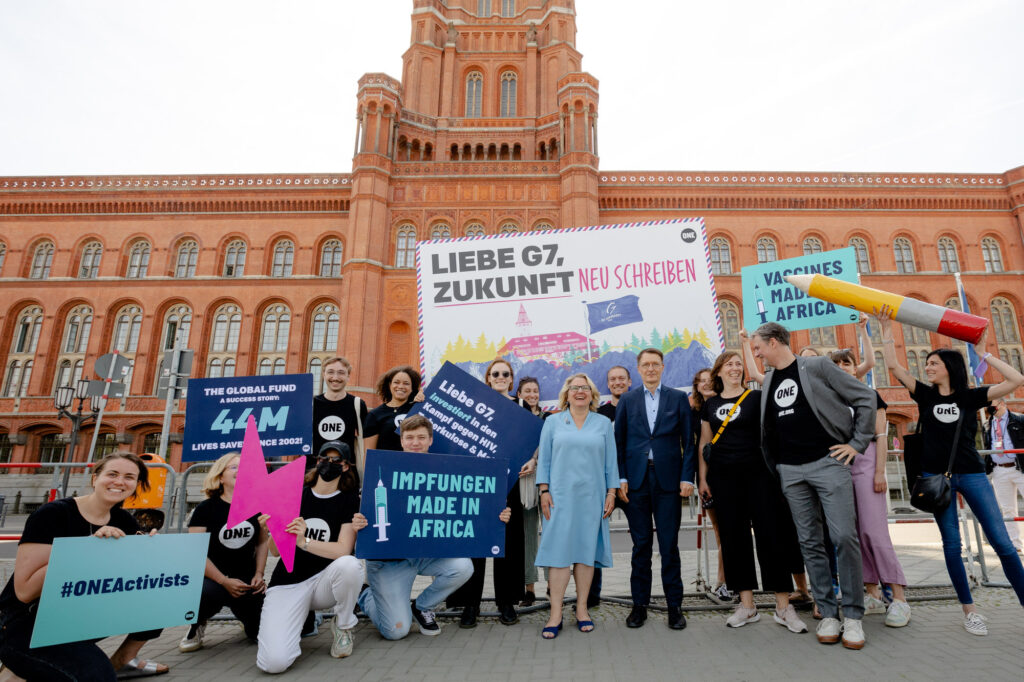 ​6. Playing our Crush the Crises game with members of the European Parliament

🚨 When #ONEActivists asked @Europarl_EN members to ‘crush the crises’ of conflict, COVID-19, climate change, and famine, they showed up!

Can we expect the same quick reaction time from the 🇪🇺 at the G7 next week?
#EUtweets #GenerAction pic.twitter.com/VNBvpkXNF9

7. We inspired change in other young people

One of the best parts of campaigning is inspiring communities to mobilise. This was a big part of the roadshow, and we got to meet people from all walks of life to talk about our campaign.

In the UK, ONE Activist Anish Subramaniam even spoke to a class of young students about global issues and inspiring positive change.

Yesterday, I spoke to the @robertgordons ‘Green Beans’ group on inspiring positive change! We had a great discussion on global issues & wrote letters to the PM as part of @ONEintheUK‘s #generaction initiative.
Our future is definitely in safe hands with them!@robin_macp #youth pic.twitter.com/aeCAEMhI0N

8. Celebrating Africa Day in the Netherlands

ONE Activists attended Africa Day in Amsterdam, the largest public event in the Netherlands related to Africa and international cooperation. They also stopped over in The Hague and invited MPs to enjoy ice cream and discuss our issues. The MPs were all enthusiastic and stressed the need for political pressure on global health issues. The speaker of the house, Vera Bergkamp, also posted about us on Instagram!

9. Delivering our postcards to G7 leaders… or close enough!

Ahead of the summit, we delivered the postcards in person to EU, UK and German G7 representatives, including Wolfgang Schmidt, the Chief of Staff of the German Chancellery! To make sure the rest of the G7 governments didn’t miss out, we dressed up as G7 leaders ourselves and ‘delivered’ them at the summit. 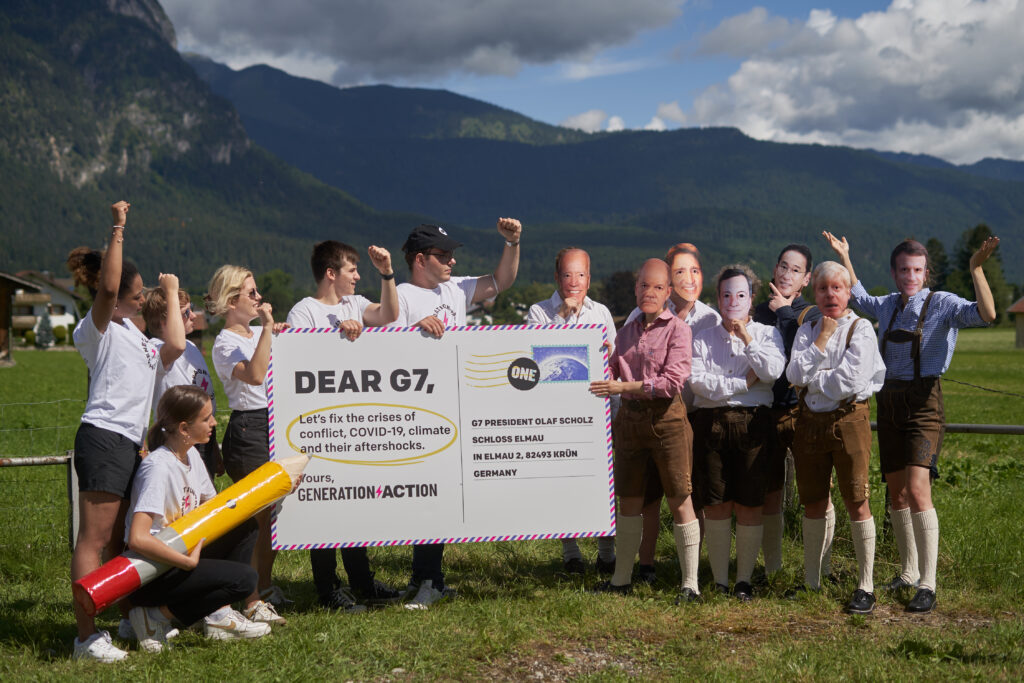 10. Projecting our message on a ski jump near the G7 venue

We went big and projected a message on the Olympic ski jump in Garmisch, near the G7 summit venue. We wanted to make sure our message would get some attention during this busy time – and it worked! The projection gained extensive media coverage.

G7 leaders just concluded their 2022 summit and while they showed some welcome ambition, they failed to rise to the challenge of the crises we’re facing. As Edwin Ikhuoria, our Executive Director for Africa, states, “The inability of the G7 to provide the global leadership needed in the face of these threats is a collective failure that leaves people everywhere at risk.”

But our work doesn’t end now. We’re truly grateful for all the support we’ve received so far, and we’re even more energized to continue campaigning for change throughout the summer and beyond. Together, we can rewrite the future.

Share this blog using the buttons below to help spread the word!