Dr. Mo Ibrahim is a global expert in mobile communications with a distinguished academic and business career. More recently, he has played a leading advocacy role on issues of African development and governance, through his Foundation and through participation in a range of global initiatives. After a long career in academia, six years as Technical Director for Cellnet of BT, and founding a consultancy and software company, Mobile Systems International, in 1998 Dr. Ibrahim founded Celtel International to build and operate mobile networks in Africa. Celtel became one of Africa’s most successful companies with operations covering more than a third of the continent’s population and investing more than $750 million in Africa. The company was sold to MTC Kuwait in 2005 for $3.4billion. In 2006, Dr Ibrahim established the Mo Ibrahim Foundation to support good governance and great leadership on the African continent. The Foundation focuses on two major initiatives to stimulate debate around, and improve the quality of, governance in Africa. The Ibrahim Index of African Governance provides civil society and governments with a comprehensive and quantifiable tool to assess governance and promote accountability. The Ibrahim Prize for Achievement in African Leadership recognises and celebrates excellence. Dr Ibrahim is also Founding Chairman of Satya Capital Limited, an investment fund focused on Africa. Dr Ibrahim was listed by TIME magazine as one of the 100 most influential people in the world. He has also received numerous honorary degrees and fellowships from a range of academic institutions. Dr Ibrahim is the also the recipient of a number of awards including: The Chairman’s Award for Lifetime Achievement from the GSM Association in 2007; The Economist Innovation Award 2007 for Social & Economic Innovation; Ordre national du Burkina Faso (Officier) and the BNP Paribas Prize for Philanthropy in 2008. 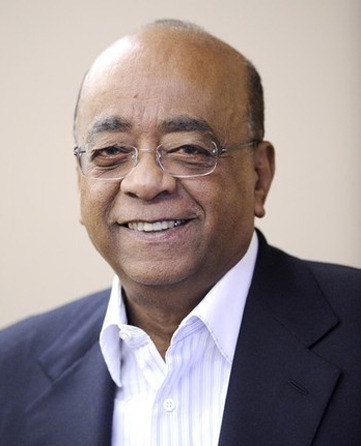