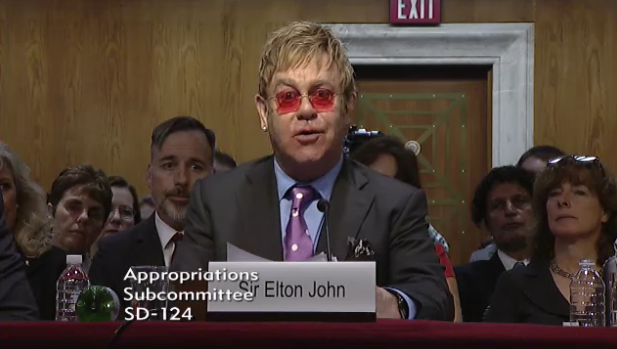 The first time Sir Elton John testified before Congress, in April of 2002, only 50,000 of the nearly 30 million people living with HIV/AIDS in sub-Saharan Africa had access to antiretroviral medicine. “This is the government of the richest nation in history, and I’m here asking you for more money to stop the worst epidemic in history,” he said then, “Forty million people are infected with HIV. Eight thousand people are dying every day. You have the power to end this epidemic. Please end it.”

This Thursday, testifying once again before Congress, he spoke with a bit more bouncy. “Thanks to the unprecedented actions of Congress, an HIV-positive mother in South Africa can give birth to a healthy, HIV-free baby who she can live to raise,” he said. “Thanks to the generosity of the American people, 9.4 million men, women and children have access to life-saving antiretroviral treatment.”

Globally, due in part to programs like PEPFAR and the Global Fund to Fight AIDS, TB, and Malaria, the annual number of new HIV infections has been cut in half since the 1990s, when the infection rate was at its highest. AIDS-related deaths have fallen by 35% since peaking in 2005. And thanks to services to prevent mother-to-child transmission, around the world more than 1 million babies have been born HIV-free. As Sir Elton John put it, “We are no longer bailing out a sinking ship, we are helping steer it into safe harbor… There is a window of opportunity before us, a window through which we can very clearly see the end of AIDS within my lifetime.”

He’s right. We do have cause for optimism, but we must also remember that still almost 40,000 people are newly infected every week, and that only 37% of all people living with HIV have access to antiretroviral therapy. Moreover, at current rates, UNAIDS estimates that there will be 28 million new HIV infections by 2030. This is a future we can avert, but it will require Congress to continue funding life-saving global health programs.

In his closing remarks, Sir Elton John issued a warning: “If our efforts flag, drug resistance will surface, transmission rates will rise, and this disease, which knows no boundaries, will once again become a ruthless pandemic with disastrous and far-reaching consequences.” On the other hand, “if we continue the historic work of PEPFAR and the Global Fund, if we honor the 40 million lives lost over the past three decades, then we can and will the day when AIDS is no longer a horrifying global killer, but a contained and controlled chronic illness.”

“Mr. Chairman,” he said. “This is the most powerful legislative body in the world. And this Congress indeed has the power to end AIDS.”