We’ve had a busy year here at ONE. Around the world, ONE supporters were hard at work advocating for any number of important issues, from health to gender equality, foreign aid budgets to jobs, and so much more.

There’s a lot we could say about all the work that’s happened this year. Instead, we’re going to show you.

Here are a few of the amazing advocacy snapshots we’ve gotten in 2019: 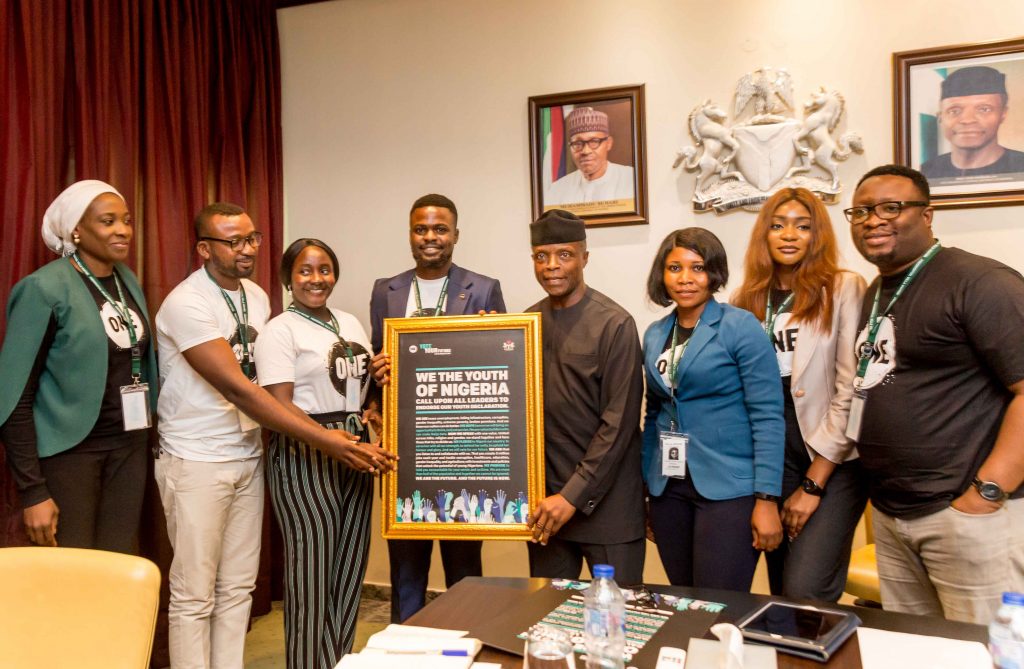 In July 2019, six ONE supporters and staffers accompanied ONE Nigeria Director Serah Makka-Ugbabe to deliver the Youth Declaration petition, signed by 67,000 Nigerians, to Vice President Yemi Osinbajo. The Youth Declaration formed the focal point of the Vote Your Future Campaign, which engaged over 9,000 young people in offline events in six geo-political zones across Nigeria. Because of our petition, Vice President Osinbajo committed to creating more opportunities for young people in the next four years. 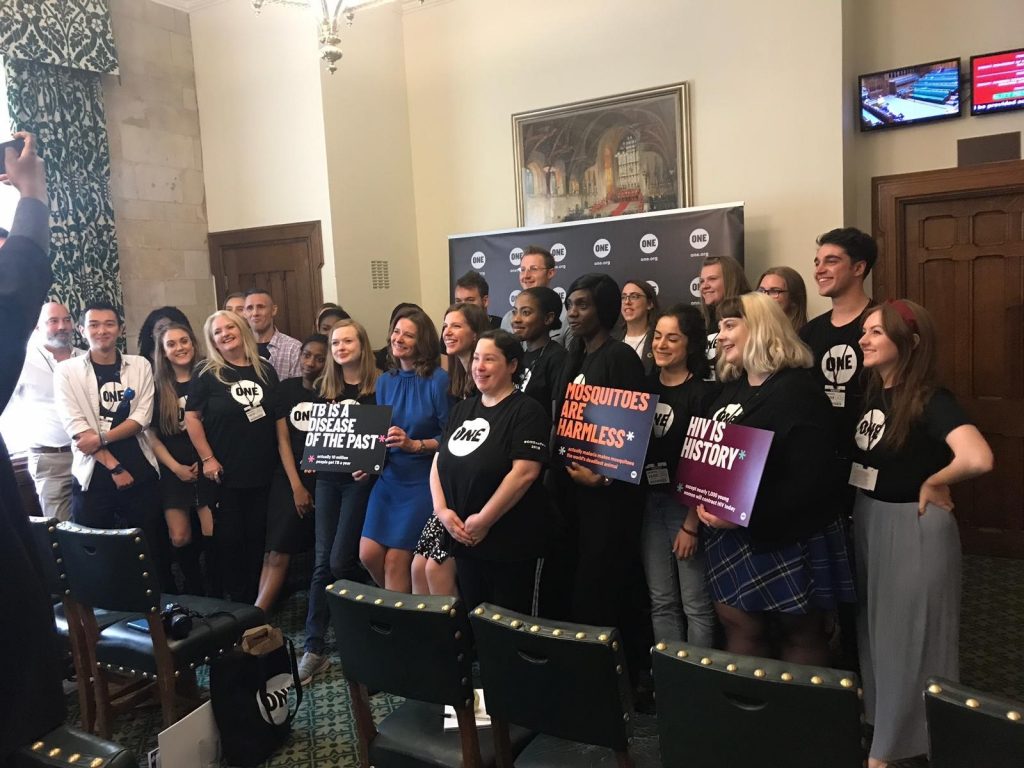 The U.K. had a big role to play in the replenishment of the Global Fund to fight AIDS, Tuberculosis and Malaria. Our Youth Ambassadors and members met with their MPs and asked them to back this life-saving fund. With 20 meetings in one day and countless others meeting with their constituencies, we sent a clear message to the leaders with the power to make change happen. The U.K.’s pledge will help save up to 2 million lives, and our Youth Ambassadors played a part in making that happen. 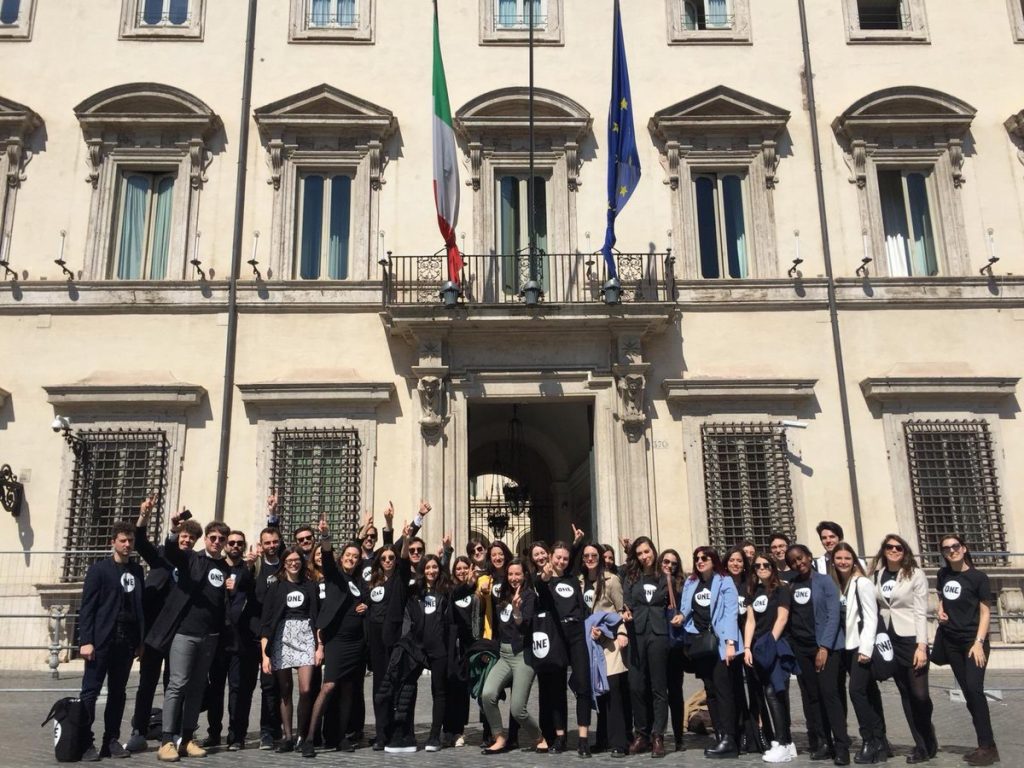 At the launch of the Youth Ambassador programme in Italy, our young activists met with the prime minister’s diplomatic advisor at Palazzo Chigi, the official government residency. While there, they delivered a strong message to the Italian institution: we want Italy to show leadership in the fight against extreme poverty.

Our message was well received! Our Youth Ambassadors received a letter from Prime Minister Giuseppe Conte himself, who encouraged the young activists to keep pursuing their noble mission. He commended their awareness-raising actions on issues that are “not only crucial for the fate of the African continent, but for our global future and well-being.” 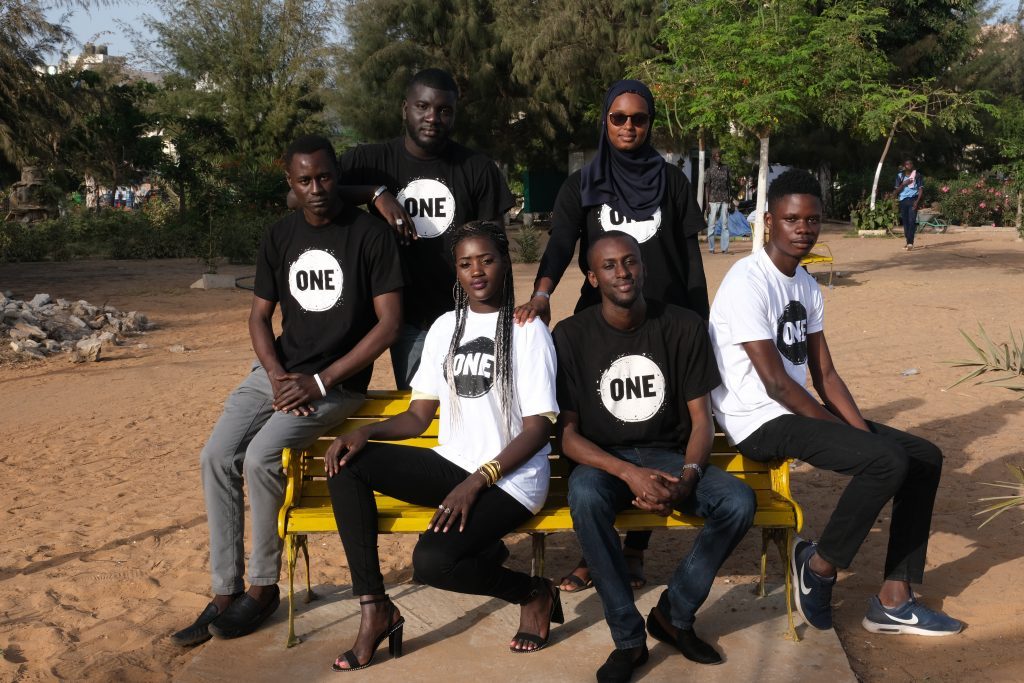 ONE has joined forces with Senegalese musician and campaigner Black Queen to launch a petition to stop gender-based violence. This petition calls on the Senegalese government to fast track a law criminalising rape as a serious crime and to protect victims of gender-based violence. The petition has reached 90,626 signatures of our goal of 100,000, and ONE has actively and successfully engaged across social media channels. 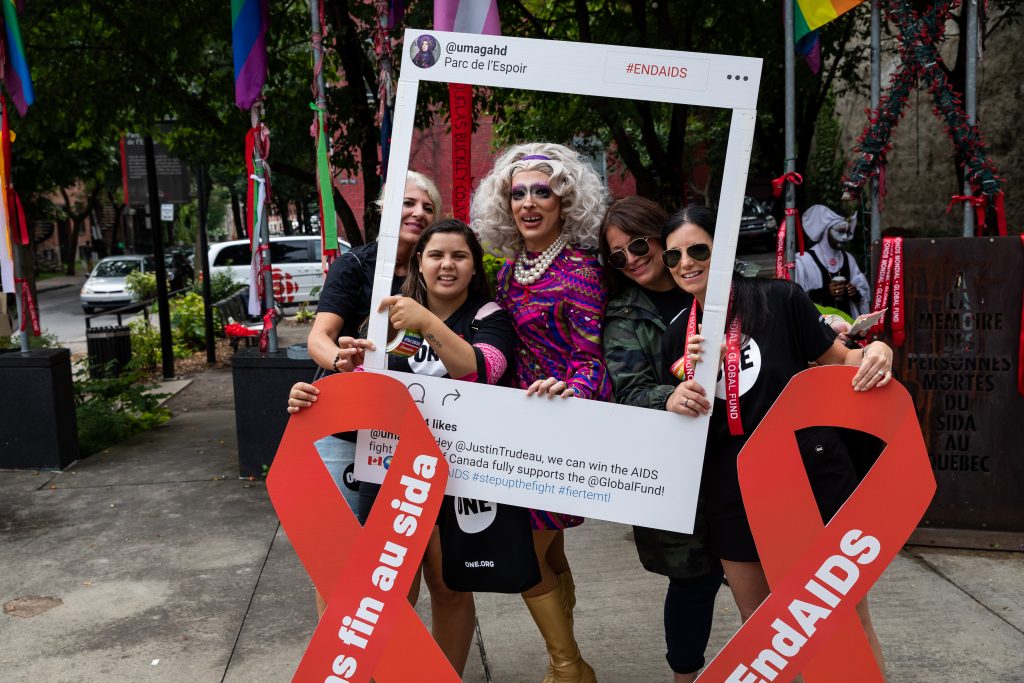 As part of our Global Fund campaign in Canada, thousands of ONE supporters from coast to coast demanded that Canada’s leaders pledge strong and pledge early. We brought in allies from different sectors, including AIDS organizations, medical experts and the LGBTQ community. Our joint effort turned into a gathering at Parc de l’Espoir in Montreal during Pride weekend to remember those lost to AIDS and demand Canada step up the fight to end AIDS at home and everywhere.

The government heard us loud and clear! On August 22, Minister Maryam Monsef announced Canada’s pledge of C$930 million – a 16% increase – to the Global Fund to Fight AIDS, Tuberculosis and Malaria. 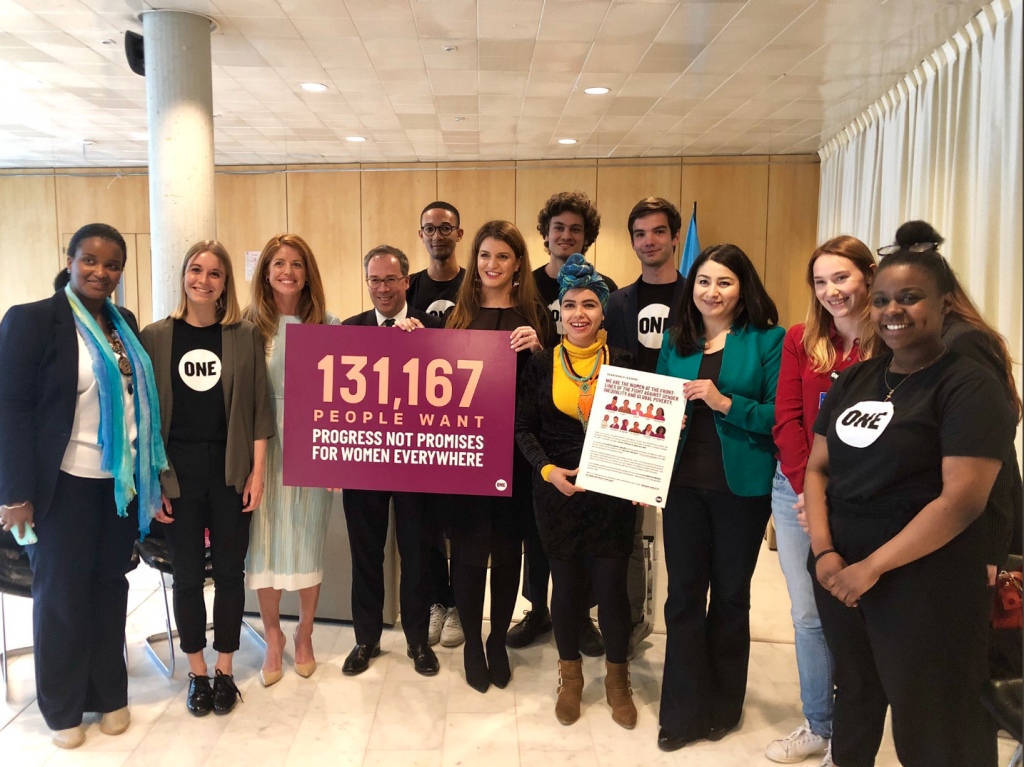 In May, G7 gender ministers assembled in Paris to discuss the commitments their heads of states would make in August during the G7 meetings. The French ONE team and volunteers infiltrated their petition board to remind them that promises are no longer enough. Youth Ambassadors, alongside AU youth envoy Aya Chebbi and actress Déborah François, delivered our petition directly to ministers. Our activists made their voice heard, and were so convincing that the French minister picked up our campaign’s tagline, “Progress Not Promises,” in her tweets. 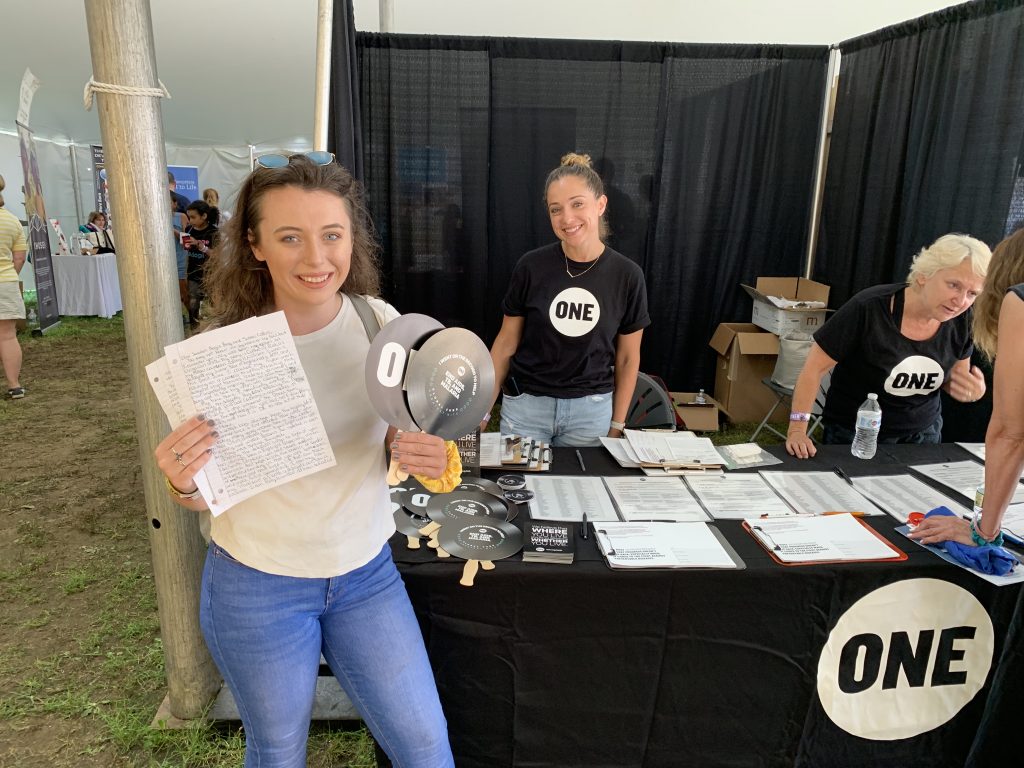 U.S. volunteers spent 2019 rallying their communities in support of the Global Fund. Elected leaders care about hearing from their constituents, so we helped our volunteers write over 14,000 letters (real letters with paper and pen!) to their members of Congress, urging them to lead the way in the fight against AIDS, TB and malaria. Our volunteers were everywhere — including local farmers markets, town festivals and some of the largest music festivals like Bonnaroo and Lollapalooza — talking to strangers and motivating them to take action. 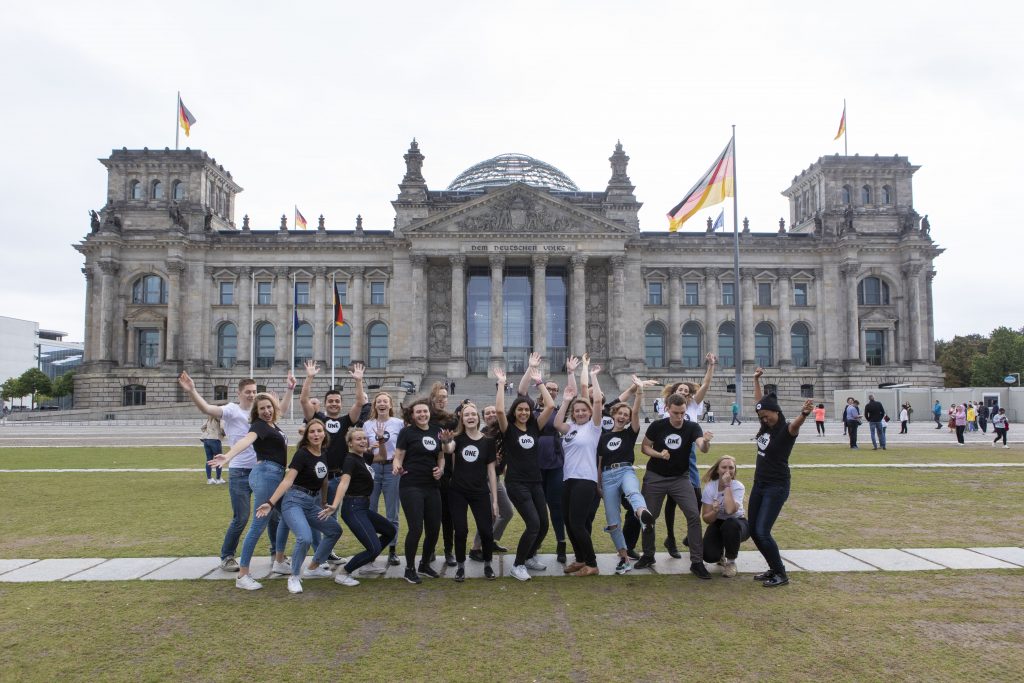 As part of our fight for a strong German development budget, Youth Ambassadors took over parliament in Berlin and met with key decision makers of the German Bundestag during Lobby Days in September. YAs asked their MPs for strong support regarding the upcoming settlement meetings around the budget 2020 — and their voices were heard! We saw a significant increase in investment for global education and health for all, proving once again that the drive of young people can really make a change and get politicians to tackle today’s global challenges. 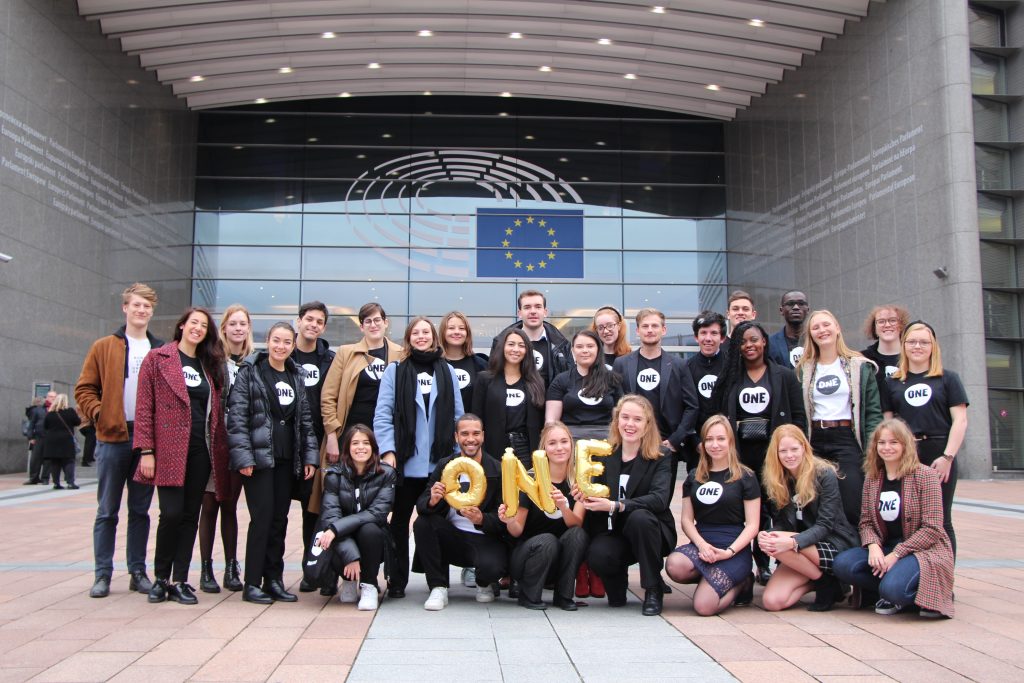 By the time the European elections took place in late May, ONE Youth Ambassadors had tweeted, emailed, called and met with over 300 candidates vying for seats in the newly formed European Parliament to make sure they are briefed on ONE’s priorities. As a result, over 160 of the newly elected MEPs signed our ONE Vote pledge, including new EP President David Sassoli. Each one has committed to the fight against extreme poverty.

Youth ambassadors from France, Belgium, the Netherlands, Italy and Germany gave more than 200 interviews to the press. Their support was instrumental in getting ONE Vote signers to become the biggest political force in the European Parliament: 204 MEPs have signed the ONE Vote pledge, passing in numbers the major political group by over 20 MEPs. 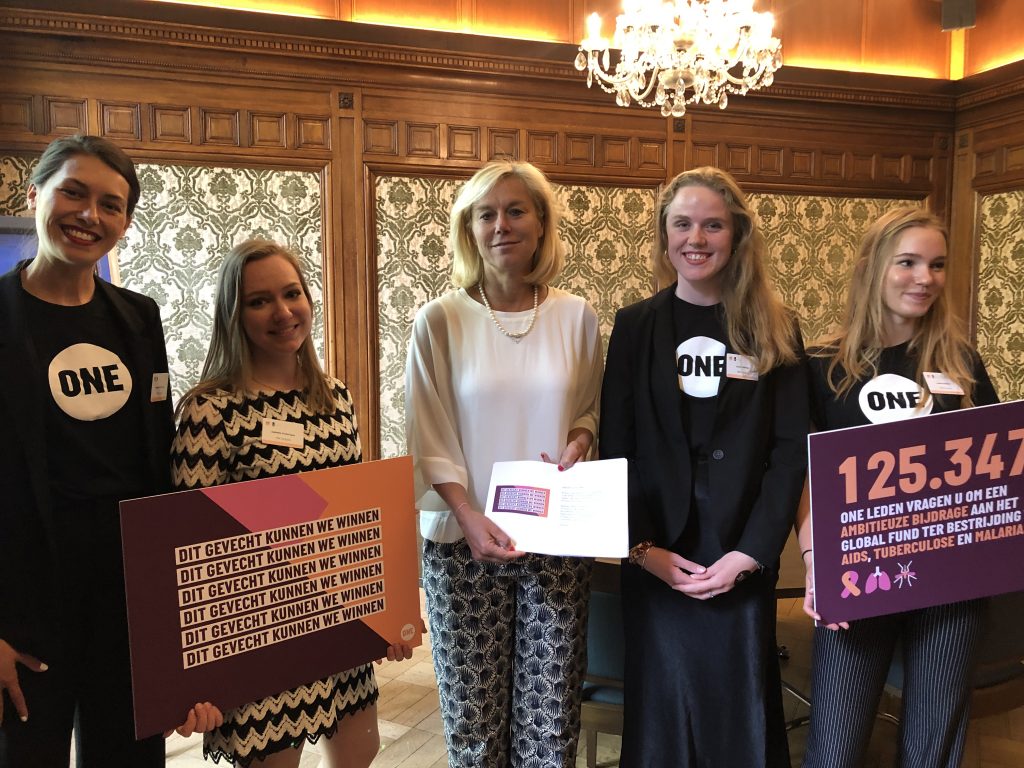 Our Youth Ambassadors really stepped up the fight against AIDS, tuberculosis and malaria. They campaigned at festivals, on the streets and at meetings with government officials. They even handed over 1,000 postcards and 125,000 petition signatures to our minister for foreign trade and development cooperation. They also visited the Danish, Australian and French embassies with a letter asking their respective governments to increase their commitment. At the French embassy, they spoke with the French ambassador, who liked our petition board so much that it now has a prominent place in his office. 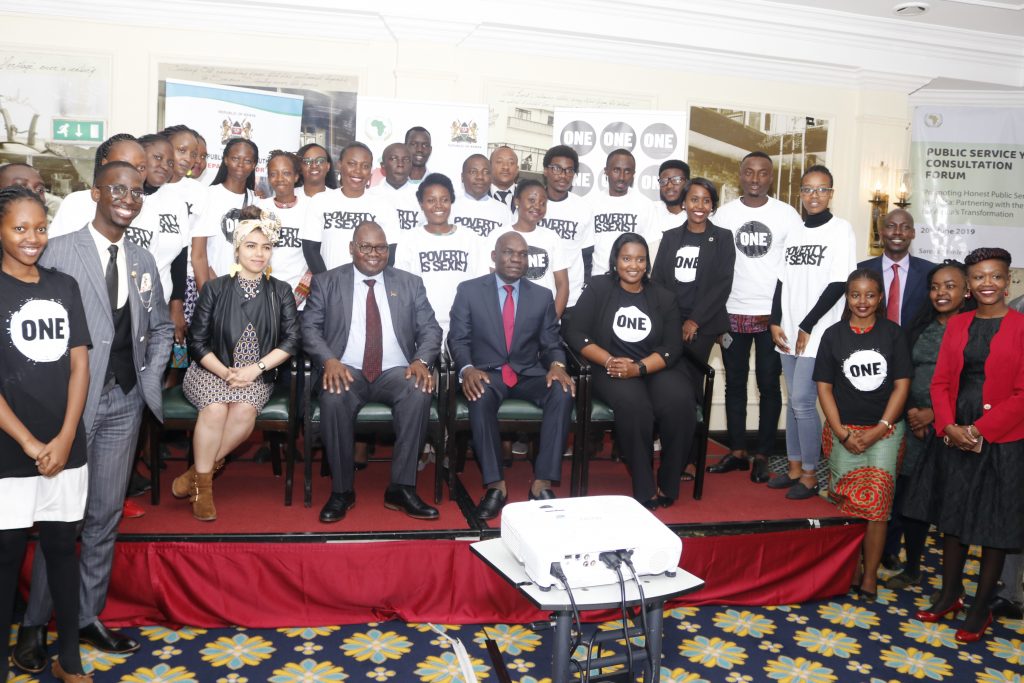 ONE, in partnership with the AU & State Department of Youth in Kenya, organized a Youth Consultation Forum in June to promote engagement and collect the views of young Africans on public service delivery. Discussions, led by Aya Chebbi and other experts, centered on migration, governance, technology and innovation. Kenyan President Uhuru Kenyatta, who visited ONE’s “Youth Zone” and engaged with our supporters, officially opened the ministerial meeting. The youth recommendations were consolidated into a communiqué, which the African Ministers of Public Service adopted in June. 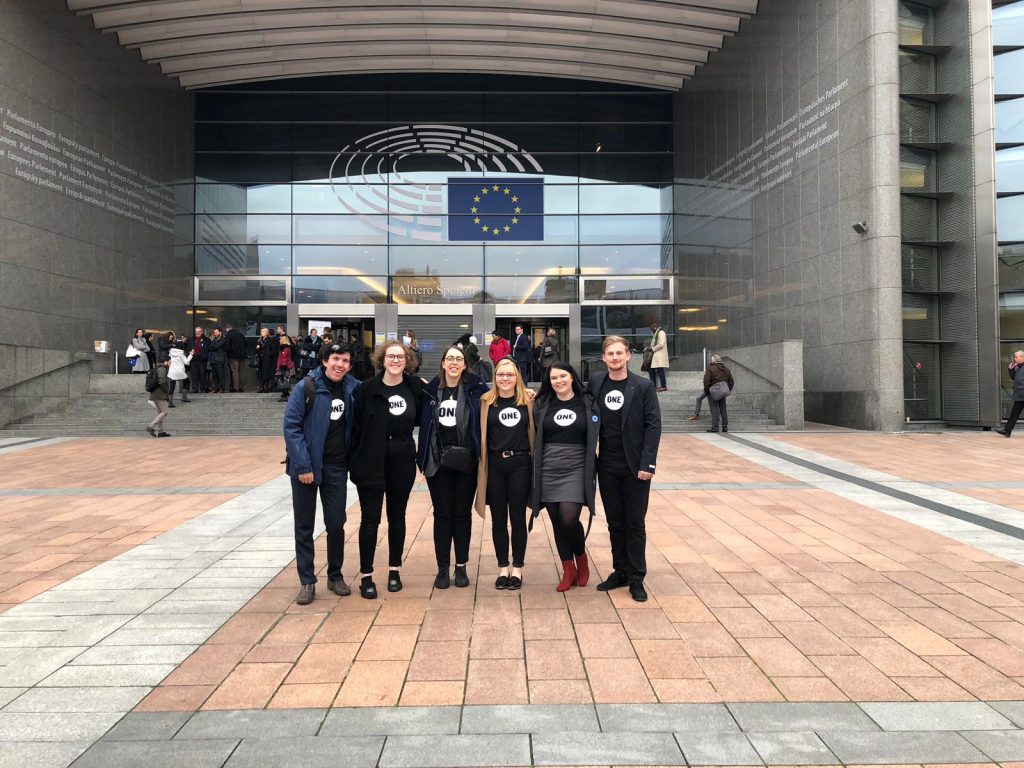 In November, we headed to Brussels with the five Youth Ambassadors representing their cohort for a Europe-wide lobby day. Throughout the EU, Irish Youth Ambassadors were out in force for the ONE Vote Campaign. They met their candidates for the European Parliament, with 90% of the total elected MEPs making a clear commitment to end extreme poverty. Our Youth Ambassadors could proudly say that Ireland’s representatives in Europe, from across the political spectrum, support ONE’s goal of ending extreme poverty and preventable disease.