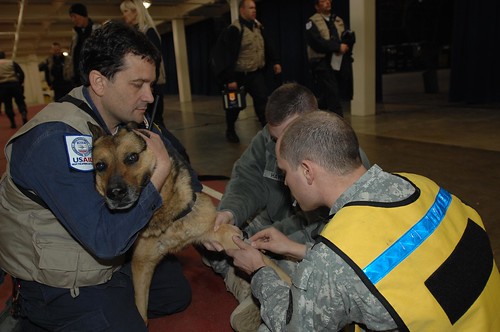 US search and rescue teams assist in aid efforts to Japan.

On Friday, Japan experienced the most devastating earthquake to ever hit the country, topping the Richter scale at 8.9. Soon after, a massive tsunami struck as a result of the quake, ravaging cities and farmland in northern Japan and even setting off warnings on the west coasts of the US and South America. According to the New York Times, officials have stated that the death toll for one Japanese seaside town alone has reached well over 10,000 people.

As Japan finds itself scrambling with a rescue effort, it now has a nuclear disaster to add to the list: six reactors have faced serious cooling problems, two of which have suffered partial meltdowns and are now dealing with explosions and leaks of radioactive gas.

Humanitarian organizations are currently in the process of reaching out and bringing relief to those affected in Japan, as countless are left without food, water, shelter and medical assistance while searching for missing loved ones.

Many of our partners have responded to the crises in Japan and affected areas. Take a look at some of their efforts in terms of providing shelter and supplies and assisting in search and rescue missions.

Saddleback Church: Saddleback Church’s Peace Relief initiative is a ministry of men and women who have been trained in disaster relief and chaplaincy. They rally small groups to engage local churches as relief centers, link with public and private partners to help provide various relief services, include physical, emotional and spiritual support, empower survivors and fund what’s overlooked.

Save the Children: Save the Children has sent emergency response teams to assess the needs of children and their families in the hardest hit areas between Miyagi Prefecture and Tokyo in Japan. The teams are within 80 miles of the nuclear reactor at Fukushima, where there has been an explosion. More than 170,000 people have been evacuated, and Save the Children is currently establishing evacuation centers in the area and along the tsunami-affected coast, where they will see that children’s needs are met while parents register for help and assistance.

American Red Cross: The American Red Cross provided shelter for those forced to evacuate in California, Oregon and Washington. On Sunday, the American Red Cross deployed a disaster management expert to Japan for a week-long mission, where she will work with the Japanese Red Cross (who dispatched 62 response teams within the first 24 hours and have housed more than 300,000 evacuated people) in an effort to best bring relief to affected communities.

USAID: USAID has deployed their Urban Search and Rescue teams to assist in the rescue effort in the aftermath of the earthquake and tsunami. The teams are comprised of 150 personnel and 12 canines trained to detect live victims, and arrived yesterday morning in Misawa, Japan, where they immediately began the search along Japanese and international search and rescue teams. USAID’s Disaster Assistance Response Team is also in Japan and working to coordinate the overall US Government response effort.

We are hopeful for Japan’s recovery and are glad to see the quick responses from so many humanitarian and aid organizations. Our thoughts are with Japan at this time.