As a young girl, Christine Amea Manzan would follow her father into his cacao field. After losing her mother, it was up to her father to raise her. She grew up in a rural area of Abengourou, Côte d’Ivoire, always wanting to stay alongside her father and his crops.

When she turned six, her father sent her away to school. Years later, as a teenager, she was again sent away – this time to learn sewing, a “proper skill” for a woman to have. The whole time, the memory of her father and the cacao plants never left her mind.

“I stayed there for two years,” she says, “then I came back to my father.”

She marched into her village, found her father in the fields, and insisted that she become a farmer alongside him.

“I told him I was suffering. My mother was not there, and the day that he was no longer alive, no one else would take care of me.” 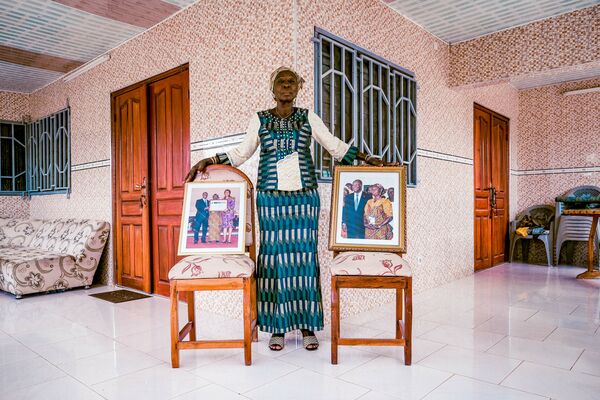 Award-winning cacao farmer Christine Amea Manzan displays photos of her with the president, who honored her for her production.

In sub-Saharan Africa, women make up almost half of all agricultural labor, but they only make up 15% of landowners. Secured land rights can boost a woman’s economic security and give her more control at home. On top of that, women with secure land rights earn more in their lifetimes.

Women aren’t the only ones to benefit from earning more. Investing in gender equality, including equal access to land rights, improves everyone’s lives. When women are economically empowered, their entire communities are better able to combat poverty. This means that gender equality can increase economic growth, which helps break the cycle of poverty for future generations.

It all boils down to this: when women have secure land rights, it helps everyone escape poverty. 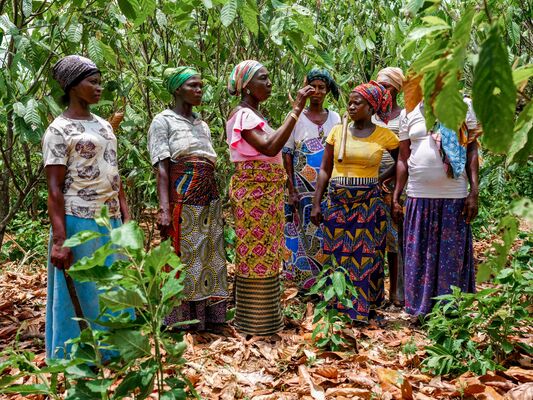 Christine Amea Manzan says it’s important to share with other women how she became successful and to encourage them that they can also earn a living from cacao farming.

Christine’s story shows the immense power of land rights. It’s been over three decades since she told her father that she wanted to be a farmer. On that day, he gave her a plot of land, and said she could become a farmer if she could successfully tend the small plot. Growing crops in that plot was the first of many successes. Now, at 64 years old, she’s recognized as the highest-producing female cacao farmer in the country. She’s currently working to increase cacao production for a local cooperative, which Cargill supports.

She’s also on a mission to help women in her community follow the same path she did. The education she received from her father helped her carve her own path, and now she’s sharing those lessons with her community.

Read more about ONE’s partnership with Cargill and the global fight for gender equality here.