On International Women’s Day, we told world leaders that we wanted progress, not promises, towards gender equality. Now, we’re working to make sure that they follow through.

The G7 Summit isn’t until August, but the journey to it has already begun. On May 10th, gender ministers from the G7 met up in Paris to talk about their priorities for gender equality. Here’s how we joined the conversation:

Over 131,000 people around the world have signed our open letter so far. Many of these signers took to social media and sent messages to their gender ministers. The message was simple: Commit to progress for gender equality.

By the ministerial, thousands of people sent messages across Facebook and Twitter. Their messages got across in a big way. On May 9th, France’s Gender Minister, Marlene Schiappa, tweeted out our message of Progress not Promises!

In the offline world, ONE Youth Ambassadors gathered in front of the UNESCO building carrying bright signs. Each one conveyed a bold message taken from the open letter, bringing its message to the public. Hundreds of thousands of French citizens saw these statements throughout the day as they headed in for the Women 7 Summit. 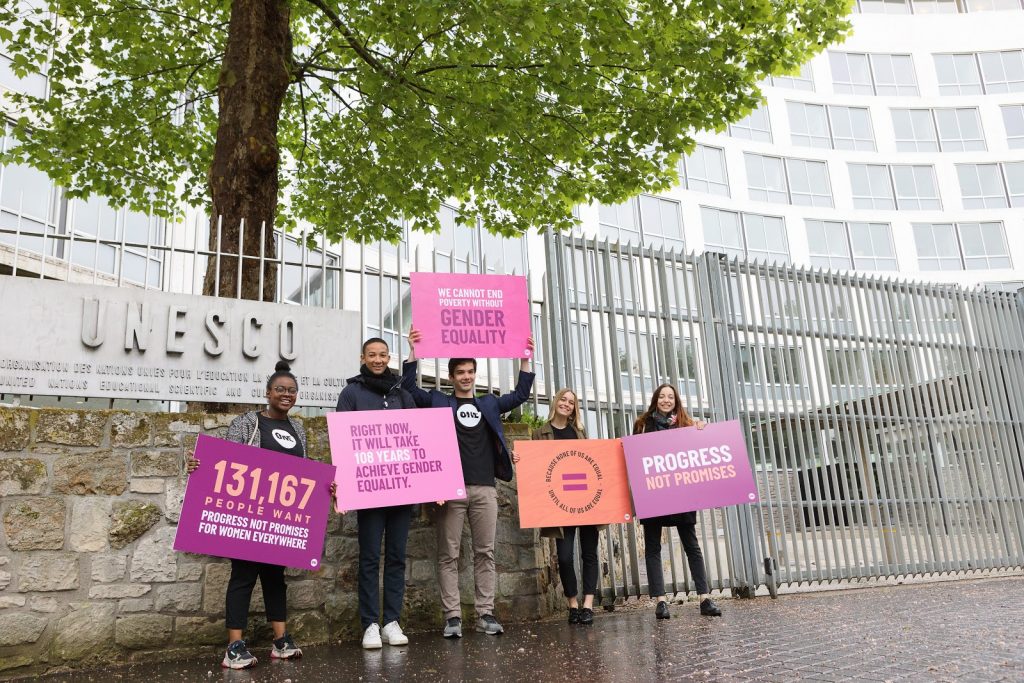 Inside the building, Aya Chebbi joined a panel on feminist diplomacy. Aya is an African Union Youth Envoy, pan-African feminist from Tunisia, and a spokeswoman for the open letter. In other words, she’s an expert on gender equality!

“How can I not be a feminist when every day I am reminded of my gender, whether on the street or on a panel?” says @aya_chebbi #FeministsCount pic.twitter.com/O8T9dedpER

She gave a powerful speech on why she’s a feminist, and how we can create an equal world for everyone. Her inspiring words covered how to achieve justice, make women decision-makers and put an end to violence. She also touched on her role as an open letter spokeswoman:

“I am one of 45 activists from 15 African countries who co-signed an open letter with ONE to ask political leaders to end the empty promises and act for women and girls living in the extreme poverty,” says Aya. “As activists, we work every day to improve the situation of women around us. But political leaders must also do their part because they are committed to achieving gender equality by 2030.”

At the end of the day, ONE Youth Ambassadors, Aya, and Belgian actress Deborah François delivered our open letter to gender ministers. They discussed why we need gender equality, and why G7 leaders should make it a priority.

The gender ministerial is only the first stop on the way towards the G7. We’ve still got a long way to go, from sherpa meetings in June to more ministerials in July, all leading up to the G7 Summit at the end of August. That means we have a lot of opportunities to tell world leaders what we want for gender equality!

Are you ready to join the fight for gender equality? Sign and share our open letter to world leaders!