For the past few months, we’ve been asking world leaders a serious question: will you make progress, not promises, for gender equality at the G7 Summit? In that time, people around the world like you have signed petitions, met with ministers, proposed your own laws, and done so much more to get an answer to this question.

While they were shuffling in and out of meetings on the world’s most important issues, we were busy reminding them of the conversations they should be having. World leaders aren’t the only ones who had a packed weekend!

Here are a couple of ways we got our message across:

Bold Statements on the Beach

The Biarritz cliffside and shores were covered in reminders to G7 leaders on the important job they had at hand. Messages supporting gender equality, multilateralism, and making meaningful progress were everywhere along the beaches. 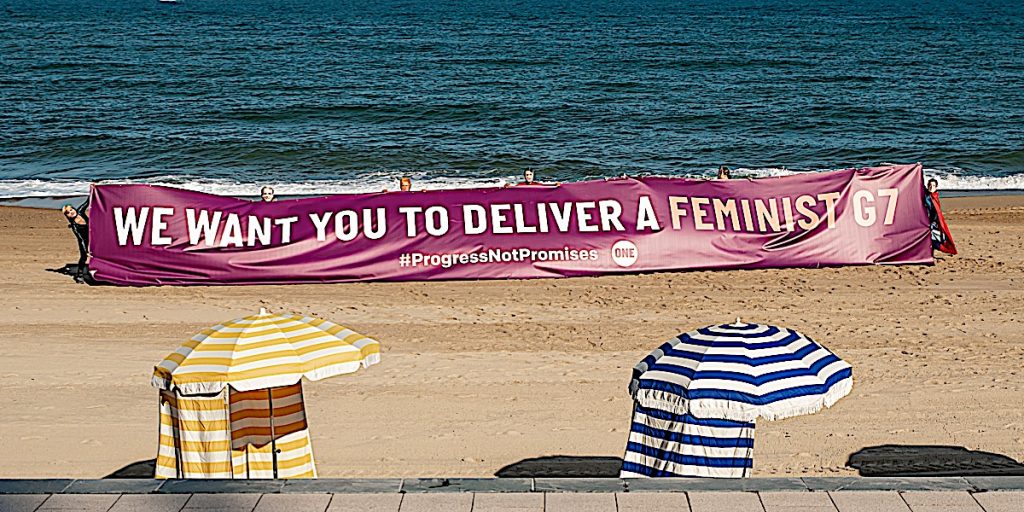 Leaving our Mark on the Beach

G7 leaders had an opportunity to turn the tide on gender equality. What better way to remind them of that than in the sand?

Sand artist Sam Dougados took to the beach three times during the Summit. The first time, he carved the faces of G7 leaders into the shore. The next day, his art reminded leaders that “words vanish, actions remain.” Finally, as leaders continued their meetings, he returned to the beach with a reminder: now is the time for gender equality.

👊↩️TURN THE TIDE FOR GENDER EQUALITY🌊🙌

Check out how yesterday’s sand art message was made! 🎨⏳

All of these messages disappeared with the tides by nightfall. Unlike his stunning art, the decisions made by world leaders will have lasting effects on the world.

You may remember the super-sized statement we made a few weeks ago (if you haven’t seen it yet, you really should). We brought that message off the social screen and into reality!

While the #G7 leaders discuss inequalities, our team have been making sure that the leaders are true to their words. We need to see real #ProgressNotPromises at #G7Biarritz! ⚡️👊🙌 pic.twitter.com/uf8CYgXT9U

Our staff members donned heroic apparel and masks of the world leaders, grabbing the attention of those passing by. They also had a large screen that played the video on loop. Anyone in Biarritz that day is sure to remember the epic opportunity that world leaders had at this Summit!

Gayle’s Messages on the Ground

World leaders were joined by our own leader, ONE’s CEO and President Gayle Smith! Throughout the Summit, she was joining in on the action and giving vlog updates to her Twitter followers.

It’s the start of a big day at @g7 summit in Biarritz. Today is when leaders need to make real progress. At current speed it will take 108 years to achieve gender equality globally. Like we’re supposed to wait that long???? #ProgressNotPromises #G7France

She also wrote a message to the G7, reminding them that the point of this Summit is to work together and reach solutions.

In the past weekend and the past few months, we have made our message loud and clear: it’s time for world leaders to commit to equality. When world leaders make serious commitments towards achieving equality, we’ll be much closer to ending extreme poverty.

So, did world leaders take action? Click here to find out!