Hunger emergencies are on the rise in Africa. In South Sudan, the situation is so bad that a full-on famine was declared two weeks ago, the first famine to be announced anywhere in the world in six years, with 100,000 people currently facing starvation.  Meanwhile, Somalia is on the brink of famine too, where thousands of people are streaming into Somalia’s capital seeking food.  Famine is the most severe of hunger emergencies, and the UN officially declares ‘famine’ only when a population reaches certain death rate, malnutrition, and food shortage thresholds. 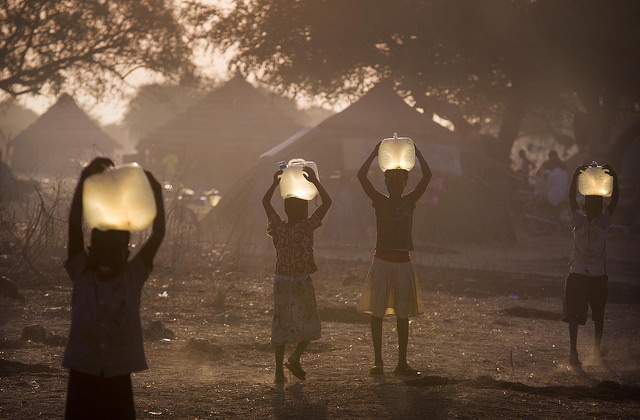 The numbers of people currently in urgent need of food aid are staggering — 6.2 million in Somalia and 4.9 million in South Sudan alone. Even more sobering, almost 1.4 million children are at imminent risk of death from starvation in Nigeria, Somalia, South Sudan, and Yemen combined.

We’ve seen what happens when early famine warnings are ignored. When famine last struck in Somalia in 2011, the international community responded too slowly, a major contributing factor to the resultant 260,000 deaths –  half of which were of children under the age of 5.  Today, just as in 2011, drought in East Africa is back, forcing food stocks down and prices and debt up across the region — famine could spread beyond South Sudan. 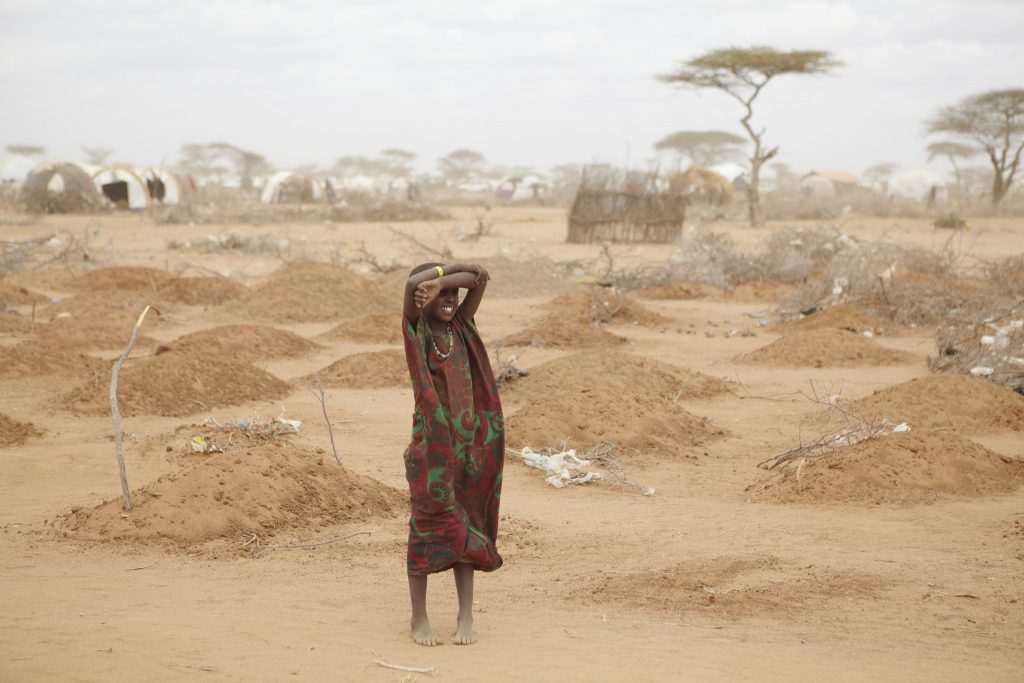 A young girl stands in East Africa amid graves of children, many of whom died of malnutrition in the 2011 famine. (Photo credit: Wikimedia Commons)

In February 2017, the UN announced that it needs a total of $4.4 billion by the end of March to respond with life-saving assistance to avert famine in South Sudan, Somalia, Nigeria, and Yemen.  As of February  22, 2017, only $90 million of those needs had been met, and, as we know, parts of South Sudan are already experiencing famine.

The global community cannot afford to ignore the warnings this time. Without adequate funding, hundreds of thousands of people, perhaps over a million children, may die, and many more will be forced to flee their homes in search of life-saving food.

The UN has repeatedly emphasized that modern-day famines are man-made — without proper attention to strong health, food, and economic-development systems in a country, drought becomes a shock too great to bear.  In Ethiopia in the 1980s, drought led to famine — in the far worse 2011/12 drought, famine was never declared because donor countries and the Ethiopian government had worked together to make the right investments and bolster the resilience of vulnerable citizens.  Donor countries must invest in long-term development solutions now to prevent deaths and far more expensive humanitarian emergency responses in the future.

But there’s another man-made element, and this one happens to be common to all of the current, most dire emergencies — conflict. Conflict stymies aid workers’ efforts to reach the hungry, blocks food shipments, and prevents farmers and herders from producing and selling food. And that same lack of investment in healthcare systems, anti-hunger programs, and economic development can itself be a major cause of the conflict, given the inequalities it engenders.

ONE recognizes that conflict and under-investment in development are interlinked — perhaps one of the most pressing examples of this link is modern-day famine. Donors must heed the warning signs and immediately respond to the current humanitarian crises to save lives.  At the same time, development aid budgets must be protected and increased, and the security and development sectors must work together to curb the underlying reasons for famine in the first place.

The President's proposed budget cuts would drastically cut food aid in the middle of a famine.

Aid and DevelopmentFood and Nutrition

The President's proposed budget cuts would drastically cut food aid in the middle of a famine.