ONE activists have returned to Capitol Hill! 35 faith leaders traveled to Washington, DC earlier this month to ask Congress to support strong leadership in the fight against global poverty and disease.

These leaders come from different faith traditions, ethnicities, and political beliefs but ONE thing unites them: “Our faith compels us to care for all neighbors, whether they live next door or in Nigeria,” they wrote in a letter to Congress.

They spent last week doing exactly that. The world is staring down many challenges that threaten all of us, but especially people living in low-income countries. Our leaders came to Congress to speak up for their global neighbors and make sure everyone, everywhere can lead a life of justice and opportunity.  What does a week of meetings in the nation’s capital really look like? Here’s a recap:

Monday:  A conversation with Senator Coons

Once they arrived in Washington, our faith leaders gathered at District Church for a conversation about how faith and advocacy intersect. Guests from both sides of the aisle shared their thoughts, including Delaware Senator Chris Coons, a key ONE ally, who joined ONE President Tom Hart to discuss how his faith guides his work in the Senate.

Faith leaders were especially moved by Senator Coons’ discussion of the moral importance of their advocacy on ONE’s issues and that one and took to heart his insight that, in the search for justice and equality, “what roots us is fighting for people.”

There were so many illuminating points Sen. Coons made about the fight for justice, equity, & humanity, but one through line for all "what roots us is fighting for people." pic.twitter.com/dD16iEPsrV

Thanks so much to @EmilyCassil for joining me for a conversation on faith, politics, & communications. Great way to kick off our @ONEinAmerica faith leaders fly-in! pic.twitter.com/Hkj9Gy1SBR

Heavy rain kept the faith leaders mostly indoors on Tuesday prepping for Hill meetings the next day, with one big exception: a meeting at the White House!

Reverend Adam Nicholas Phillips from the United States Agency for International Development (USAID), hosted the faith leaders for a discussion on how USAID and important programs like Feed the Future are working to fight rising global hunger in the face of serious threats like consecutive seasonal drought and Russia’s invasion of Ukraine.

Good to be with grassroots faith leaders from @ONE at the White House today. We talked about how @USAID and Feed the Future is working to address increased global food insecurity amidst dire challenges like consecutive seasonal drought and Russia’s invasion of Ukraine. pic.twitter.com/kpQkPRoyoB

The @ONECampaign takes DC! These faith leaders traveled from 25 different states to ask Congress to keep up the fight to end extreme poverty and preventable disease! pic.twitter.com/ZMaVXLBXzn

Back at the ONE office, staff gave the faith leaders a briefing of their own. The ONE team broke down the three “asks” our leaders would be taking to Congress the next day: 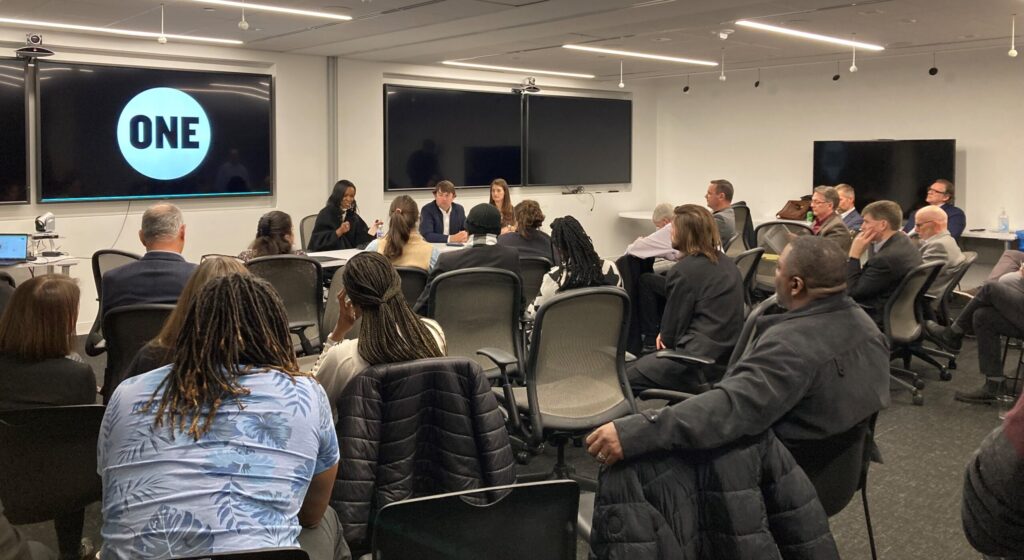 On Wednesday, the faith leaders spent the day on Capitol Hill meeting with their Members of Congress.

We are excited for Advocacy Day on #CapitolHill with faith leaders! pic.twitter.com/Xlhxkggmdb

Thank you @JohnCornyn office and Henry Juvera for the time this morning to discuss these important issues on behalf of @ONEinAmerica pic.twitter.com/qurXwmGNXX

Thank you @RepHoulahan for meeting with me today, and for helping support lifesaving efforts to address hunger and preventable disease! pic.twitter.com/X5F5IV27Ja

We even stopped traffic! A tour bus driver stopped his vehicle to get out and ask a ONE staffer who we were– because he’d seen so many ONE shirts that day.

Our faith leaders are back home now but the work is far from over. You can make your voice heard in the halls of Congress– join our fight to end extreme poverty and preventable disease!