ONE Mom Karen Walrond traveled with ONE to Ethiopia this October as the official photographer. This piece, originally published on Chookooloonks, is part of our ongoing coverage of the trip.

While much of our trip was spent in Addis Ababa, Ethiopia’s capital of about 4 million people, we also spent a lot of our time in rural areas, visiting farms and other aspects of the countryside. And the countryside is truly where Ethiopia comes into its own: while Addis is a smog- and exhaust-filled bustling, chaotic city, Ethiopia’s countryside is a textbook illustration of what pastoral living is supposed to look like: lush, rolling hills, sweet-smelling air (from all the cypress around, no doubt), idyllic village scenes.

So today, I thought I’d share with you some of the beauty of Ethiopia, as well as what life looks like outside of Addis Ababa. I hope you find it as breathtaking as we did.

For example: the image above was taken on day 3, at a rest stop halfway to Mojo, a town about 70km southeast of Addis. Lovely, isn’t it?

On day 4, we flew to Bahir Dar, a town in the northwest of Ethiopia, and then drove to a rural area to visit the Sene Mariam Women’s Beekeeping Group, a relatively new initiative supported by USAID’s Feed the Future beekeeper program. And all I have to say is that if these are the types of areas where keepers keep their bees, I think I’m going to look for a change of career. Because this spot was positively magical: 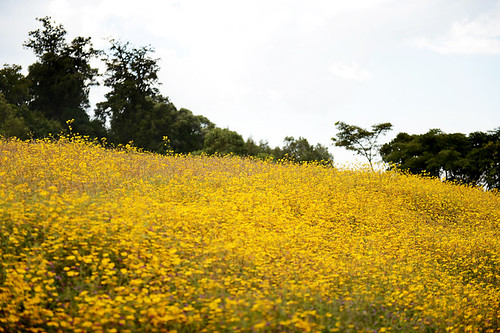 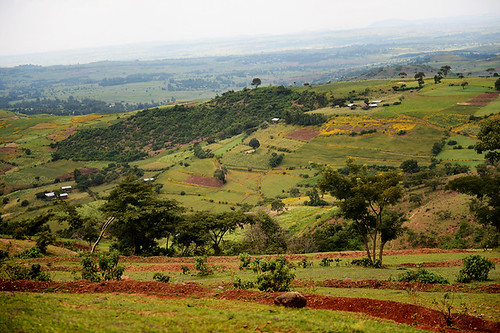 We were invited to wait in a clearing on the hillside with the view shown above, while the beekeepers retrieved their beehives and came to meet us. As we waited, scenes of pastoral life appeared before our eyes.

Like the young woman who walked down a path and stopped long enough to share a smile: 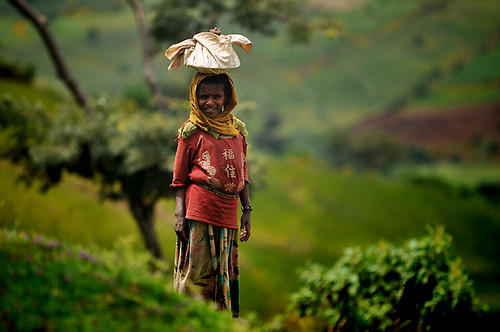 And the gentleman who did the same: 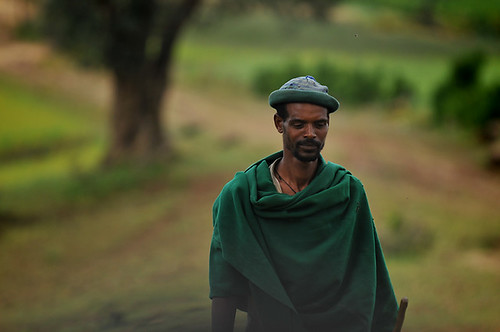 And the young man about 100 yards below us who was threshing barley, and who let me photograph him while he went about his daily chores: 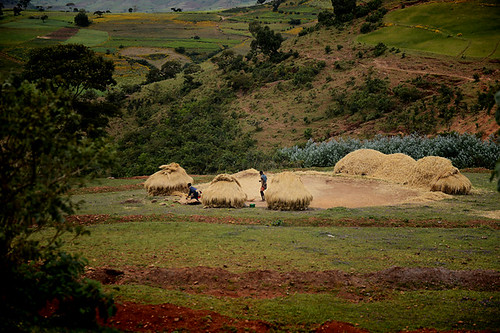 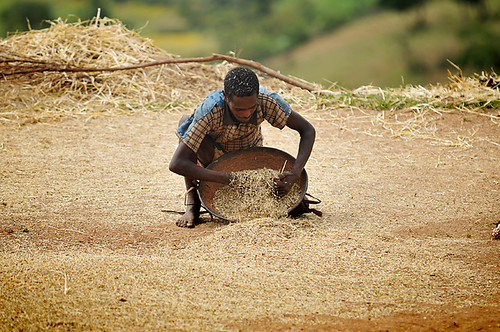 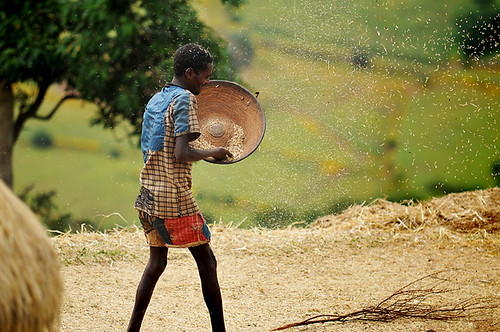 After about 30 minutes, the women beekeepers approached, carrying their beehives … 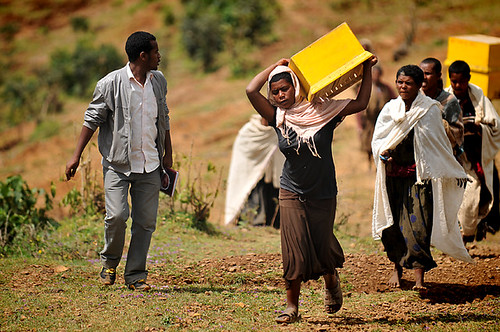 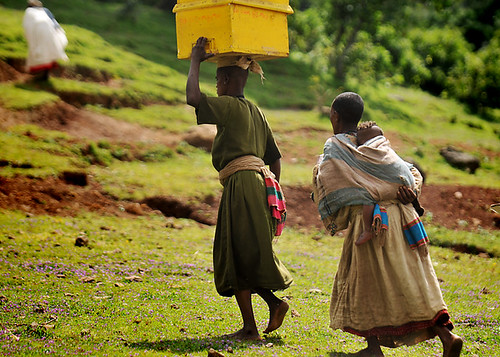 … and as we gathered around, they generously shared their stories of determination and perseverance — the hives were begun in 2011, and standard production times says that their first product won’t be ready until 2013. This long lagtime, however, didn’t seem to discourage them: as entrepreneurs, they were some of the first women in their community to actually enter into negotiations around their business, since business negotiations were historically conducted by men. Their confidence was apparent, and I have no doubt that their beekeeping venture, with the support of USAID (and, of course, all of our advocacy), is going to be wildly successful.

In addition to beekeeping, on day 5, before leaving Bahir Dar, we had the opportunity to visit a cooperative of women farmers, supported by Feed the Future and ACDI/VOCA: 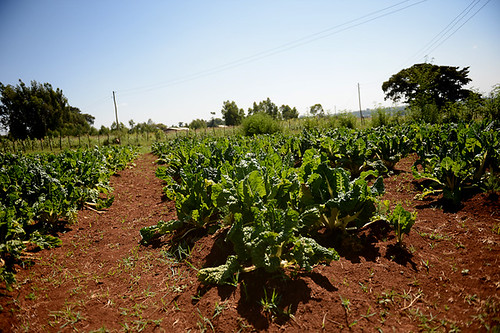 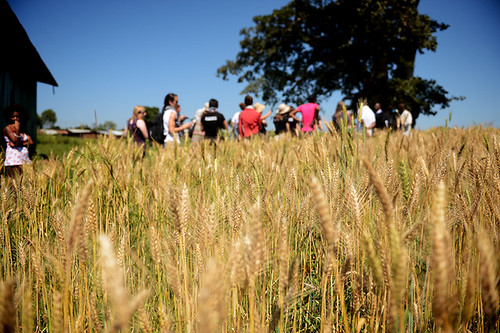 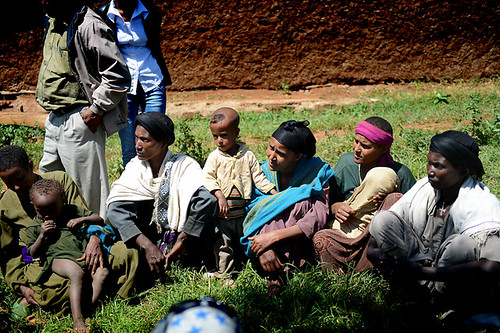 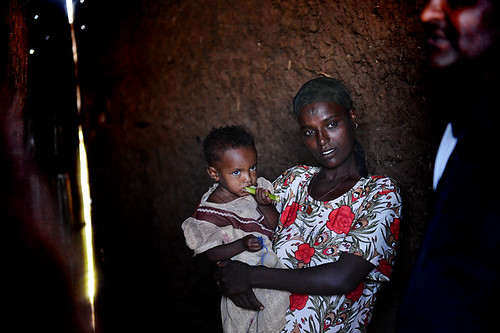 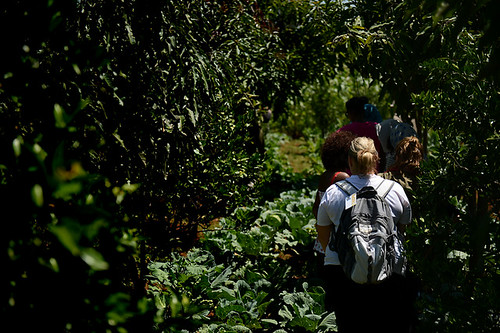 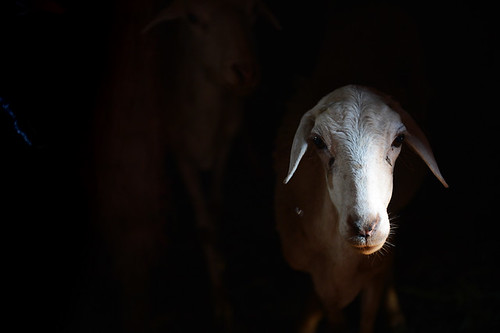 Here’s what I love about what I saw: if you continue to believe everything you read in the media about Africa, you would be convinced that feeding the hungry in Ethiopia is a hopeless cause. But I (and my camera) saw exactly the opposite: Ethiopia is an incredibly lush place, capable of untold bounty, and the programs that are in place to support this type of growth and production are making it happen. In fact, the 2011 drought did not impact Ethiopia in nearly as devastating a manner as it did Somalia and other countries in the Horn of Africa. What’s more, every single person I met proved that so much can be done even with very little. I came to Ethiopia expecting to learn, and instead, I left inspired by the indomitable spirit of the people I met.

And of course, I found it all very, very beautiful. 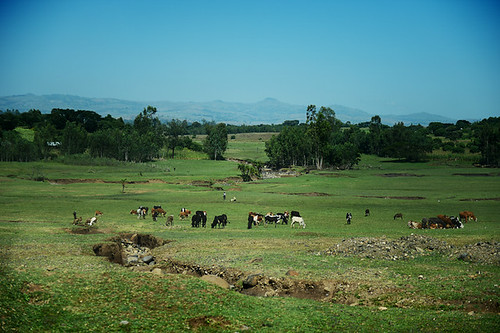 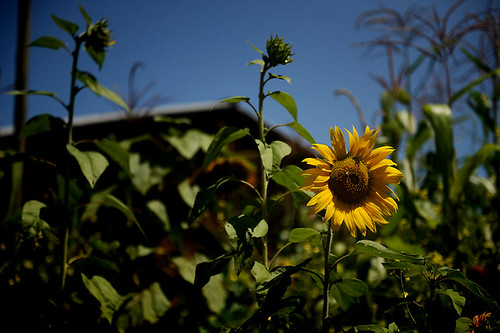 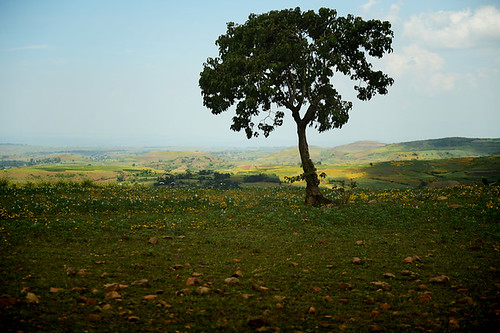 Song: Dansé dansé by Jah Lude — this is another Ethiopian singer-songwriter, and Kiru also gifted me this album. This song is the first track. Beautiful stuff.

I spent last week in Ethiopia at the kind invitation and expense of The ONE Campaign, a nonpartisan, advocacy organization dedicated to the fight against extreme poverty and preventable disease, particularly in Africa. ONE works to convince governments to invest in smart programs that help eliminate poverty and preventable disease in a sustainable way. I was supporting a group of parenting bloggers by capturing images that tell the story of how the organizations for which ONE advocates are effecting real change in Ethiopia.

If you’re moved by anything you read or see here, on the ONE blog or any of the ONEMoms’ blogs and you’d like to help, please consider adding your voice, and join ONE by simply filling out the surprisingly short form in my sidebar on the right, or the form below. Your information will remain confidential, I promise. And if you’re already a member, and would still like to help, I’d love if you’d spread the word by sharing this post with your friends and followers.

That’s all there is to it. Because ONE never asks for your money, just your voice.