David Anderson is director of quality and infection prevention and control at Nightingale Hospital in Manchester, UK. He is a frontline nurse and humanitarian health advisor with UK-Med. He worked in Sierra Leone in 2014 during the Ebola epidemic. We interviewed David as part of our #PassTheMic series.

Here’s some of what he had to say.

If you had an absolutely coordinated global response to coronavirus, one of the beauties would be that you’d have greater control. We would have a much better galvanised approach to dealing with this globally. For example, the flight restrictions wouldn’t have come in with such a scattered approach. That would have been done more systematically and then would have slowed down the spread, in particular into major hubs.

One of the key things we should tackle now is looking at how we can support other countries that are not as well developed. That means making sure the correct vaccination programmes are in place and the correct healthcare is in place to deliver that. 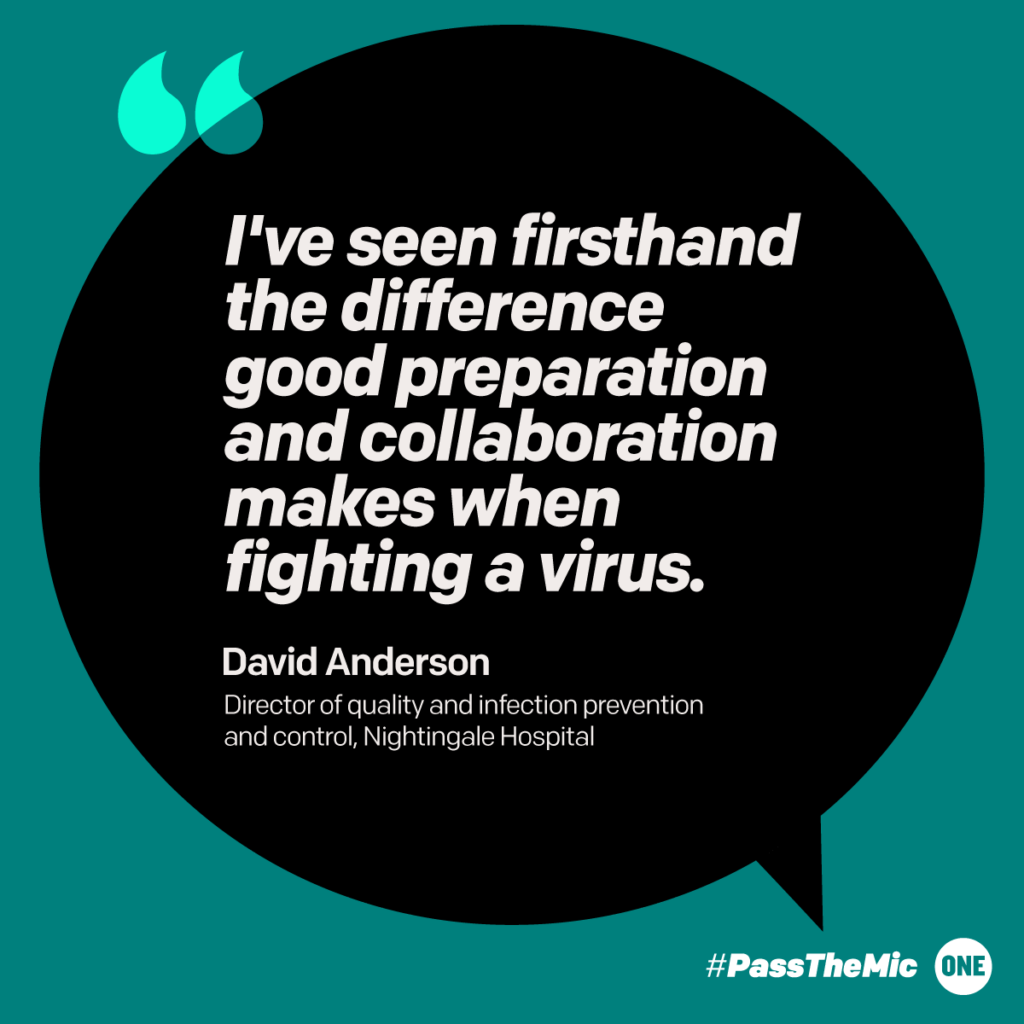 A global approach also allows you to control things in a much better sense, and it would probably have had a far lesser economic impact than we’re currently seeing.

The economic numbers are bad enough in the UK, but I dread to think what it will be like in other countries. Think of the fallout in Sierra Leone after Ebola, for example. Before Ebola, Sierra Leone was starting to become a country where people would go on holiday. Now it’s one of the poorest countries in the world again, so they’re still living that nightmare of having had a dreadful disease.

It’s very difficult to think about priorities in a global response, because you want to solve everything at once. Ultimately, if we can get a vaccination against the disease, let’s get that done.

The risk of a second spike

One of the big risks if we don’t get a reasonably well coordinated response is a second spike. If you look at the Spanish flu, for example, the first spike was big enough, and then that second spike was just horrific. So what we really want to be able to do is make sure we mitigate against that as much as possible.

That needs to be balanced against the economics and all the other things we need to consider. Because if we don’t tackle this in a controlled and sensible fashion, then my worry would be that we will see another massive spike, and that would be appalling.

I don’t think it’s necessarily the approach that we’d wish for — but, what you do see is that most countries are trying their utmost to do this the best way they possibly can and to deliver that huge balance again of healthcare versus the economy. I think some areas will struggle heavily with it, and it’s not going to be easy.

What crisis tends to do is galvanise the population to do the right thing.

What crisis tends to do is galvanise the population to do the right thing, and that is really wonderful.

These excerpts from the interview were edited for length and clarity.