The idea of a meal of turkey or ham with all the trimmings is synonymous for many of us over the holiday period, but have you ever wondered what our fellow citizens around the world are going to be eating on Christmas day?

After a lot of scouring the Internet, we’ve managed to track down quite a few interesting Christmas dinner alternatives you and your family might want to try this year instead!

If you haven’t had lunch yet, prepare to feel some food envy…

This is a traditional Albanian pie cooked usually on Christmas Eve, especially in Catholic families. The ingredients are wheat flour, pumpkin, walnuts, vegetable oil (if fasting is considered) or butter, a pinch of salt, and black pepper. Sometimes oregano is added. The pastry layers are traditionally homemade, filled with a baked pumpkin mixture, which contains butter, salt and pepper.

The “bread of Jesus” is a sweet bread formed like a baby Jesus. It is made with flour, eggs, milk, yeast, raisins, and sugar. Usually, it is given to children on Christmas and St. Martin’s Day and often enjoyed with a cup of hot chocolate!

The name literally means “monkey’s tail” and it’s a traditional Chilean drink served around Christmas time—very much like the tradition of serving eggnog during Christmas in North America and western Europe.

This dish most likely is adopted from Puerto Rican cuisine, a dish known as arroz con gandules. The word moro relating to rice and beans originated in Cuba. Eaten in the Dominican Republic, a similar dish is known as is Moro de guandules con coco. Similar to Jamaican rice and peas, the rice is cooked with onions, bell peppers, garlic, tomato paste, celery, thyme, oregano, coconut milk, and green pigeon pea—and is a traditional food for Christmas!

A Christmas ham or Yule ham is a traditional dish associated with modern Christmas and historical Yule. The tradition is suggested to have begun amongst the Germanic peoples as a tribute to Freyr, a god in Germanic Paganism associated with boars (see Sonargöltr), harvest, and fertility.

A tamale is a traditional Mesoamerican dish made of masa (a starchy dough, usually corn-based), which is steamed in a corn husk. The wrapping is discarded before eating. Tamales can be filled with meats, cheeses, fruits, vegetables, chilis, or any preparation according to taste, and both the filling and the cooking liquid may be seasoned.

A cabbage roll is a dish consisting of cooked cabbage leaves wrapped around a variety of fillings. It is common to the ethnic cuisines of the Balkans, Central, Northern, and Eastern Europe, as well as West Asia. Meat fillings are traditional in Europe—often beef, lamb, or pork seasoned with garlic, onion, and spices. Grains such as rice and barley, eggs, mushrooms, and vegetables are often included. Pickled cabbage leaves are often used for wrapping, particularly in southeastern Europe.

Allahabadi cake is a traditional Indian rum fruit cake originating and lending its name from the north Indian city of Allahabad. It is a popular cake with maida, eggs, clarified butter, sugar, petha, marmalade, nuts, ginger, and fennel as its main ingredients. Allahabadi cake is prepared for consumption during Christmastide by the Christian population of Hindustan.

In December 1974, KFC Japan began to promote fried chicken as a Christmas meal. Eating KFC as a Christmas time meal has since become a widely practiced custom in Japan and now a whopping 3.6 million Japanese households celebrate Christmas with a takeaway from the Colonel. 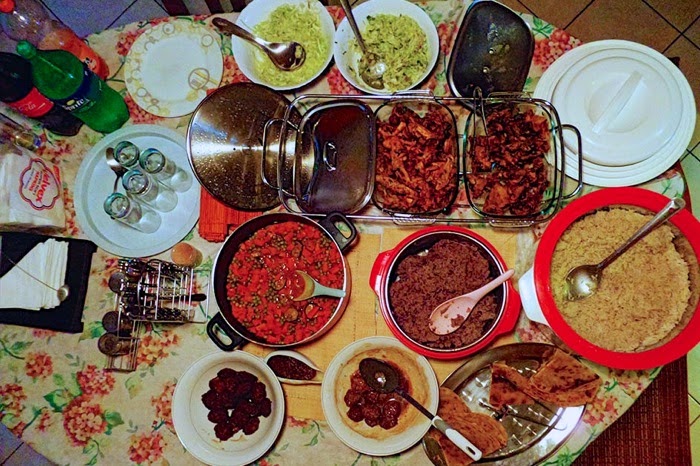 Christmas dinner is likely to be fish or nyama choma. Goat or beef is used for nyama choma, although goat is considered a greater delicacy. Vegetables, fruit, and chapattis are also often served with chutney!

Twelve dishes representing the twelve Apostles or twelve months of the year plays the main role in Lithuanian Christmas tradition. The traditional dishes are served on December 24. The meal is a family occasion that includes many traditions of both pagan and Christian origin.

Romeritos is a Mexican dish from southern Mexico consisting of sprigs of a wild plant known as seepweed. In Spanish it is known as romerito. The name in English means “little rosemary”. Usually, romeritos are served with patties of dried shrimp and potatoes in a sauce. They are traditionally enjoyed at Christmas and during Lent.

In addition to serving turkey, a traditional Christmas meal in Nigeria may include beef, goat, sheep, ram, or chicken. Other dishes might included pounded yam, jollof rice, fried rice, vegetable salad, and some type of stew.

The traditional Peruvian Christmas dinner often revolves around a roast turkey, but some families might sit down to lechón (roast suckling pig). Other regional variations exist, such as fish dishes on the coast, a classic Andean pachamanca in the highlands, or a roasted wild chicken (gallina silvestre al horno) in the jungle. Applesauce and tamales are also common additions to the Christmas table.

It is traditional for Christmas feasts to be mainly comprised of roasted goat. In Kenya, Uganda, and Rwanda, for example, the goat meat is eaten hot from the charcoal grill and as a rule, in just one sitting. This can be accompanied with vegetables, but not always!

In Senegal, a country where the majority of the people are of Muslim faith, Christmas is not a traditional holy day, but Christmas day will still be celebrated amongst the Christian community. These celebrations will see Christians sit together around the national dish, the tiep bou dienn, which is made from rice, fish, tomato sauce, and vegetables such as cabbage, carrot, and cassava.

In Trinidad and Tobago, traditional meals consists of generous helpings of baked ham, pastelles, black fruit cake, and sweet breads, along with traditional drinks such as sorrel, ginger beer, and ponche de crème. The ham is the main item on the Christmas menu with sorrel to accompany it.

Turkey and all the trimmings – UK

In the United Kingdom, what is now regarded as the traditional meal consists of roast turkey with cranberry sauce, served with roast potatoes and parsnips and other vegetables, followed by Christmas pudding—a heavy steamed pudding often served with brandy butter or cream!

Are there any other cool holiday meals we’ve missed on this list? Let us know in the comments below!