Governments love to make big pledges to help end poverty. The question is, how often do they deliver? How well are they spending their aid – where’s it going, who’s benefiting, and are they transparent about it? With the Sustainable Development Goals (SDGs) due in just over ten years’ time, we need to know these answers.

That’s why ONE has created the Better Aid Scorecards, which assesses the 21 biggest donors on their aid volume, aid targeting and aid quality. This tool gives a snapshot of how well the world is doing. The current picture is not all positive. Donor countries are not pulling their weight, and there’s a funding gap of billions of dollars.

Achieving the SDGs needs money from many sources – government budgets, private investment and aid. Aid is a critical resource to support poverty reduction, particularly in the poorest countries that have the fewest resources.

1. Rich countries are not putting their money where their mouth is

Back in 1970, donors agreed to an ambitious, but attainable, target to invest 0.7% – that is 70 cents for every $100 – of their yearly national income as international aid. Almost 50 years later – and after many donors re-committing to it – they’re very far from achieving it. Donors are spending less than half (44%) of what they have committed. If all donors had met the 0.7% target in 2018 there would have been almost $200 billion more aid available.

Countries like the UK, Sweden and Norway come out on top, but diving into the 3 different areas (quantity, targeting, and quality) every donor has room to improve. The UK, for instance, has met its 0.7 commitment but needs to improve aid targeting and quality.

3. Less than one third (29%) of global aid goes to the least developed countries (LDCs)

LDCs continue to struggle with high levels of poverty and have the fewest financial resources to address their own development challenges. None of the 21 donors we evaluated spend enough of their aid budget on the countries that need it most. Click the image below to tweet this statistic. 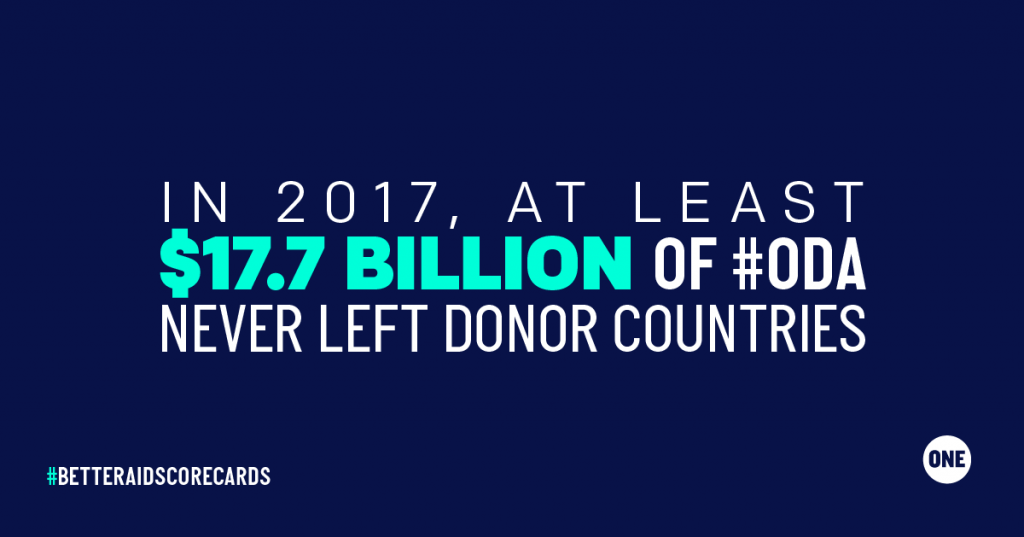 4. Donors are spending too little on health, education, and social protection

In 2017, donors spent only 32% of aid on these core catalysts for development, far lower than the 50% target advocated for by ONE. The U.S., however, spends a commendable 57% of its aid on social sectors.

5. Despite gender inequality being a major obstacle for overcoming poverty, girls and women are not sufficiently prioritised

Collectively, donors target a mere 36% of their aid to gender-responsive projects, which take into account the specific needs of women and girls. Sweden (84%) and Ireland (83%) show that it is possible to spend a large majority of aid in gender-responsive ways.

6. In 2017, at least $17.7 billion in aid never left donor countries – $4 billion more than the total aid invested in the world’s 10 poorest countries

Certain types of financing, such as money to support refugees living in donor countries, or scholarship costs for international students, can technically count as aid, but we believe is not directly contributing to poverty reduction and reaching countries that really need it. Although this spending is important, it should be additional to aid, which is already too scarce.

The world set a deadline to end extreme poverty by 2030. With just over ten years to go, the outlook is not promising, as major donors are off-track against each of the criteria we examined. But, all is not lost. There’s still time for donors to step up. The Better Aid Scorecards are a tool to hold their feet to the fire.

Visit the Better Aid Scorecards site and view our rankings in detail.