Evans Wadongo, founder and executive director of Sustainable Development for All Kenya and one of CNN’s top 10 heroes of 2010, explains why electricity is so important to African development. Like 68 percent of the population of sub-Saharan Africa, Evans grew up without a dependable source of power. Check out how his personal experience growing up in rural Kenya inspired him to make a change. 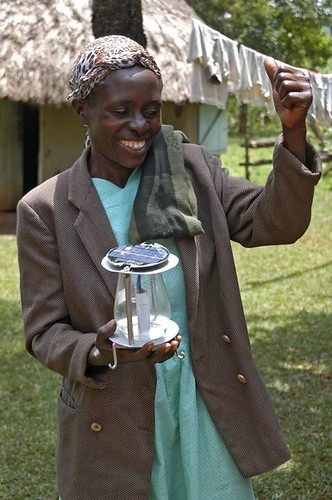 Energy poverty is a time bomb, an issue that receives little attention but is contributing so much to poverty and slow economic growth in many countries around the world. Thousands of opportunities are lost due to lack of affordable and reliable energy, and, as much as the situation is worse in developing countries, developed countries do not escape the effects.

Photo caption: Just having a simple source of light can make all the difference in the world. A woman with the MwangaBora lamp in Kenya. Photo credit: Evans Wadongo.

Having grown up in a rural village without electricity, I experienced first-hand the effects of energy poverty. My brothers and I used kerosene lamps for studying everyday. We were lucky that our parents could afford kerosene but, even so, the supply was not steady and guaranteed.  We also had to travel long distances to access the kerosene. I used a tin kerosene lamp with an open flame, often referred to as ‘Koroboi’ in Kenya, and developed eye problems due to frequent exposure to the smoke from the lamp. A lot of my neighbors were extremely poor and could only afford kerosene occasionally; children from such homes could not study at night. I walked long distances to school everyday, and the school had no electricity, too. Back then in my primary school, corporal punishment was the order of the day. Imagine the frustration of being punished for not doing your homework, and yet it was not your fault but rather an unfortunate situation of lack of kerosene at home. A lot of my friends dropped out of school for this reason.

In developing countries, school performance for children attending rural schools without electricity is always way below that of children attending urban schools with electricity. Out of the whole class who sat for the national examinations when I was in eighth grade, only two of us managed to go a good high school and later on attended university.  Children who perform poorly in many rural schools often end up impoverished, continuing the cycle of poverty and lack of economic opportunities in rural areas. 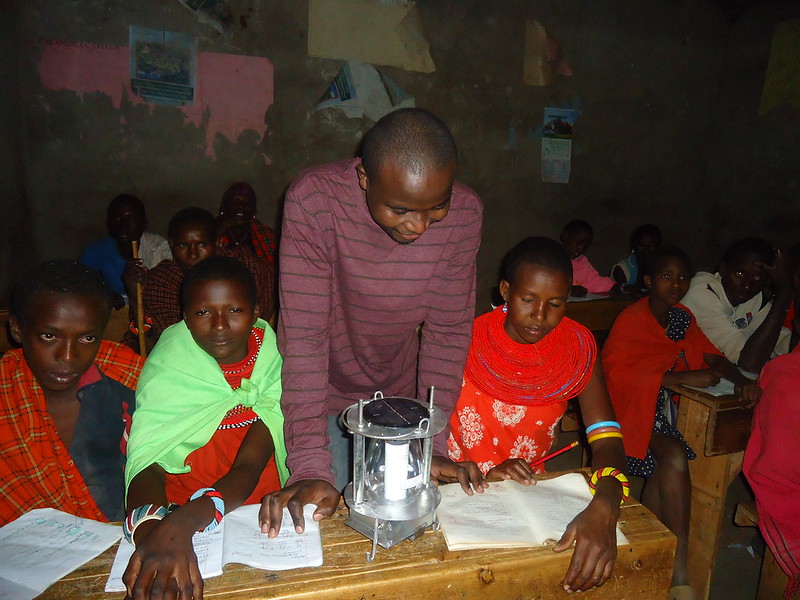 Children should not have to study in the dark. Photo credit: Evans Wadongo.

Kerosene has adverse effects on our environment. According to studies conducted at the Berkeley Laboratory at the University of California, kerosene consumes 77 billion liters (20.3 million gallons) of fuel worldwide each year, costing its predominantly impoverished users a total of $38 billion annually. Furthermore, if a single kerosene lantern burns for an average of four hours a day, it emits over 100 kilograms (220 pounds) of carbon dioxide a year. The combustion of fuel for lighting consequently results in 190 million metric tons of CO2 emissions, equivalent to one-third the total emissions from the UK. Indoor air pollution from kerosene wick lamps can cause fatal respiratory problems over time and deaths from accidental fire are also all-too common, particularly among rural households in developing countries, which are often grass-thatched.

It is because of my childhood struggles that I thought of a simple solution that can make access to clean energy for rural communities easy and affordable. I designed a simple solar lamp dubbed “MwangaBora” in order to enable children to study at night and poor families to avoid unnecessary expenses on kerosene. MwangaBora is made from 50 percent recycled materials, and its simplicity means youth with informal education can construct the lamp with only simple tools.

After I distributed the MwangaBora lamps to a few villages, I realized that although performance for school-going children has improved, their parents could not afford their secondary schooling or college fees. I therefore developed an innovative model called ‘Use Solar, Save Lives’ through which we distribute the MwangaBora solar lamps to rural communities via women groups. We then train the women on micro-enterprise development and eventually help them to establish small businesses from the money they would have otherwise spent on kerosene. I later set up a NGO, Sustainable Development For All, through which we have directly helped over 130,000 people in Africa. We are also working with local community partners in Northern Kenya to set up and support special evening classes for children who work as shepherds, who are culturally denied a chance to attend daytime school in order to herd livestock. We help provide learning materials, teachers and the MwangaBora solar lamps, which the children use in the classes as a torch to scare off wild animals and at home as a source of light.

Over 1.2 billion people are still without access to electricity worldwide, this includes about 550 million people in Africa. The number of people without access to energy in sub-Saharan Africa is projected to rise to 90 to 100 million individuals in 2030. Without access to energy service, the poor will be deprived of the most basic of human rights and economic opportunities to improve their standard of living. People cannot access modern hospital services without electricity or feel relief from sweltering heat. Food cannot be refrigerated, and businesses cannot function. Lack of access to energy has a direct, negative effect on infant mortality, illiteracy, rural-urban migration and security. Children cannot study at night, and the list of deprivation goes on.

Energy poverty is a global problem that affects every person. It is therefore important for governments and the private sector to increase their investments in sustainable, especially renewable, energy. We can ignore the gross effects of energy poverty and ultimately continue to pay higher prices in each and every sector or decide to take concrete action by paying attention to and advocating solutions that can drive millions out of poverty.