This piece is part of a reporting partnership between ONE and Refugees Deeply.

Khamisa grew up in southern Sudan, in an area now part of the world’s newest country, South Sudan. When she was 10 years old, her father was killed in a land dispute; fearing their own safety, Khamisa and her mother traveled to Kakuma Refugee Camp in northwestern Kenya – currently home to 179,000 refugees. Eventually Khamisa was granted refugee status in the United States, and she moved to Boise, Idaho – now her home.

“I grew up there (southern Sudan) ’til the age of 10 and then went to Kenya with my mother to seek refuge. It was 1996. It was not easy. The only thing that I remember is that we had been without food for a very long time – several days. The only thing around was fruit from the desert. We managed to stop a truck heading towards the Kenyan border and they helped us cross over. 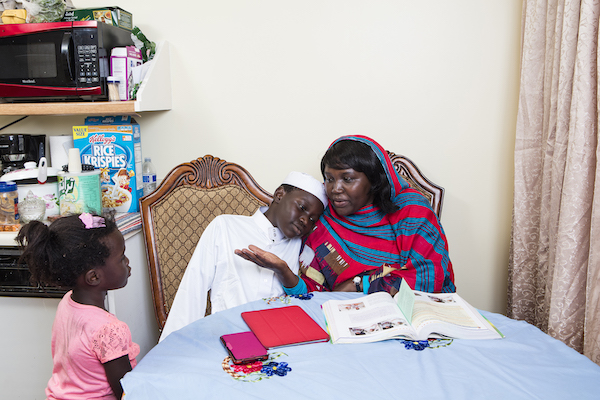 “When we were staying in the camp, we girls didn’t have the opportunity of regularly attending school. We were told that as women we could not do a lot of things. Early marriages were common. Girls in school would be removed from classes because there was a man with enough money or cows to marry them. Families there were so poor that they looked at us girls as part of their income, or rather an investment. If you were a girl who started menstruating they counted you as a woman who can take care of a family.


Girls in school would be removed from classes because there was a man with enough money or cows to marry them.

“In America, even if you know the language, the environment is new to you. You don’t know when and how to get to the market and other simple things. When I first moved here, I used to work two jobs and sleep only one and a half hours every day. Now I’m much stronger, not like before. I had remained with all this (experiences and memories) for a very long time. I couldn’t talk because when I would start talking I would start crying. But after counseling sessions and interacting with different people, I am stronger.

“I have everything I need. I have eyes. I have my hands and feet. A lot of people use food stamps, but I want to do everything on my own. I always dreamed of becoming a nurse. When I was in the refugee camp I did a course with UNHCR (the UN Refugee Agency) as a mental health care assistant. I enjoyed working as a caregiver. I decided it was something I wanted to do in the future – to help people. I saw a lot of people lose their lives because there was no one who knew about medicine. My kids are the ones who keep me going. If I can see them laughing every day, I don’t worry about anything. I just feel happy. I feel thankful. I believe that everything that happens to a human being happens for a purpose. If all these things didn’t happen to me, I wouldn’t have been here today.”

Khamisa’s stories was produced in collaboration with Refugees Deeply and Stronger Shines the Light Inside – a photography project that tells the collective story of resettled refugees in Idaho.