Now more than ever, every senator and representative should hear from constituents like YOU. It’s quick and easy: Click below to call your elected official and tell them to reject President Trump’s proposed cuts to foreign aid.
CALL NOW
Save on Facebook

Halloween, schmalloween. The most shocking things in life aren’t haunted houses or ghosts that go “BOO!” – it’s what’s happening right outside your window.

I asked our policy team to share the most surprising, illuminating facts they’ve come across in global development. Here’s what they said: 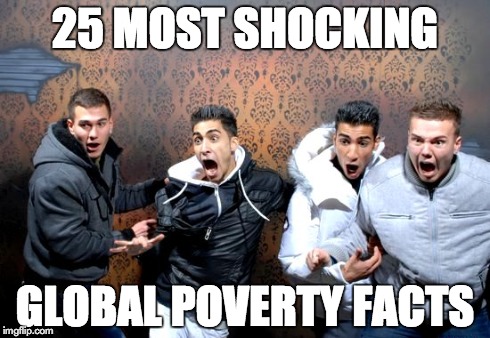 1. More people have access to a mobile phone than a toilet

2. Every year, developing countries are robbed of more than $1 trillion that could fight poverty, disease and hunger.

That’s nearly the population of the United States and Canada combined.

4. We’ve boosted the number of people who have access to life-saving HIV-treatment globally by 4200% since 2002.

5. Africa is way bigger than you think.

Here’s the map to prove it:

During moments of peak demand on game day, the 80,000-seat stadium may consume up to 10 megawatts of electricity. Liberia has the capacity to pump less than a third as much power into its national grid.

7. Less than 1 percent of the US budget goes to fighting extreme poverty.

I know lots of you know that one, but it still surprises people.

That’s a lot of food… in the trash. More here.

9. Individual US states are much richer than we think

Or… countries outside the US are much poorer than we think.

11. Diarrhea and pneumonia together kill more kids than AIDS, malaria and TB combined.

The sad part is that these are all preventable, treatable diseases that no one should have to die from.

But the cool thing is that we can get this number to zero by 2030. Seriously.

This stat is crazy and I can hardly believe it, but it’s true.

15. Of all the 26 countries where the rate of extreme poverty is over 40%, only 2 are NOT in sub-Saharan Africa

16. Poor people in developing countries spend 60-80% of their income on food.

17. The value of Africa’s exports of oil, gas and minerals was nearly 8x the value of international aid the continent received in 2011.

Which begs the question… where is the money going?

18. 8 out of 10 people in sub-Saharan Africa heat their home and cook food using open fires.

Which is really, really bad for your health.

If they joined hands, they could form a complete circle around the earth.

21. Only 2 African countries publish sufficient budget information for citizens to know what their governments are spending money on.

Hey, government: how much are we spending on public education? Oh, you have no idea? K thanks bye.

22. If unchecked, the Ebola epidemic is expected to infect 1.4 million people by January 2015.

This is more than twice the number of people killed and wounded in the US Civil War.

If you haven’t already, join the Global Road Safety Partnership.

24. Americans spend more on Halloween than the entire world spends on malaria in a year

Now this fact is just straight up scary.

Imagine if every child between the ages of 0 and 4 in the states of Maryland, New Jersey, Virginia, New York, Connecticut, Delaware and D.C. died in 2013. It would be utter chaos.

Big thanks to ONE’s global policy team for sharing the most powerful stats they’ve found in development!

We can turn these facts into fiction. Join ONE’s global movement of more than 7 million people working together to end extreme poverty.