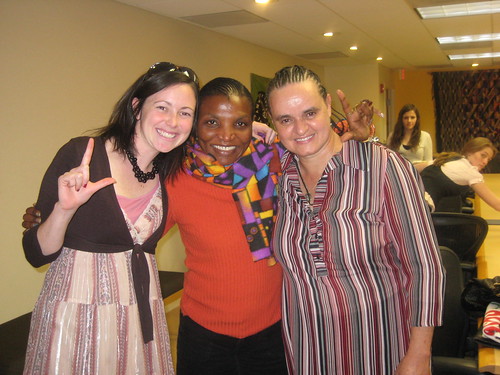 Thanks to Amnesty International USA, last week I and some other ONE staff got the chance to meet with two extraordinary women from the organization Women of Zimbabwe Arise (WOZA). Formed in 2003 by Jenni Williams, WOZA now has a membership of over 70,000 women (and men) and has truly become a grassroots force to be reckoned with.

The idea behind WOZA, as Jenni Williams and Magodonga Mahlangu stressed, is to give ordinary women in Zimbabwe the power to mobilize and take nonviolent action against injustices. Unfortunately, the right to mobilize—something we as ONE members often take for granted—is regularly stifled in Zimbabwe by a police force who, according to Ms. Williams, have become agents of the ruling party rather than an independent and non-partisan organization. Both Ms. Williams and Ms. Mahlangu have spent time in custody for exercising WOZA’s ability to organize and peacefully protest.

Both women spoke at length about some of the crushing social and systemic crises currently afflicting Zimbabwe, including a collapsing economy, healthcare system and a disintegrating—nearly nonexistent now—educational system. The children that are fortunate enough to live near an open and staffed school have to bring their own chair and chalk to school and basic medicines, including pain killers, are no longer available in many hospitals. As these problems mount, the Zimbabwe government continues to subvert the will of the people, making a stark divide between wealthy politicians and impoverished citizens.

It was fascinating and enlightening to hear Ms. Williams and Ms. Maglangu speak not only about their on-the-ground, personal experiences living in Zimbabwe, but also their efforts to mount a massive coalition of ordinary Zimbabwe citizens to speak out against the Zimbabwe government. They are truly living up to the mission of WOZA, which means “come forward” in Ndebele.

To learn more about WOZA and their ongoing campaigns, check out: www.amnestyusa.org/woza and http://www.amnesty.org.uk/actions_details.asp?ActionID=364.