Yesterday, ahead of World AIDS Day 2012, ONE published a report that takes a hard look at how much progress the world has made on AIDS and analyses which countries have been leaders and laggards in the fight.  ‘The Beginning of the End? Tracking Global Commitments on AIDS’ shows that although significant progress has been made, if we maintain the status quo on treatment and prevention, we won’t see the beginning of the end of AIDS until 2022.  It’s a worrying conclusion.

In an event yesterday at the European Parliament some leading experts on AIDS discussed progress in Europe and what the EU can do to help get the world back on track to hit some of the key UN-backed targets for 2015. 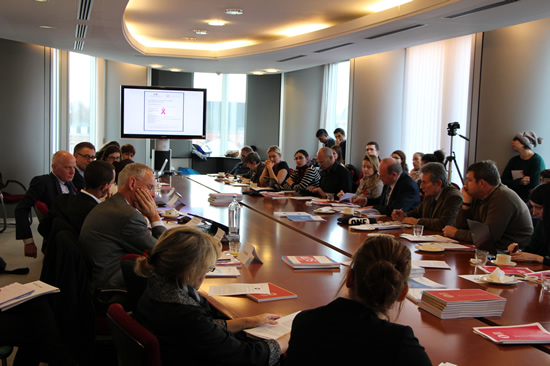 Eloise from ONE presented the main findings of our new report.  It shows that UN-backed efforts to drastically reduce the rate of new infections amongst adolescents and adults as well as programmes targeting mother-child transmissions both need to be stepped up.  On a more positive note, it finds that the target of getting 15 million people on anti-retroviral treatments by 2015 is well within reach if current rates of treatment growth can be sustained and increased modestly.

The EU is currently negotiating its next long term budget. Eloise pointed out that these negotiations represent a crucial opportunity for long-term and sustainable EU assistance for the fight against HIV/AIDS.  In particular, the European Commission’s ability to robustly support the Global Fund to Fight AIDS will be dependent on the outcome of these negotiations.  You can see an excerpt from Eloise’s presentation in this YouTube clip.

The event was attended by around 50 representatives from the EU institutions, African embassies, EU governments and NGOs.

Without scaled-up financing, more targeted programming and expanded political will, the beginning of the end of AIDS will remain a distant ambition. But with concerted action, the world can chart a course towards ending this pandemic.

Read more about the event on theparliament.com