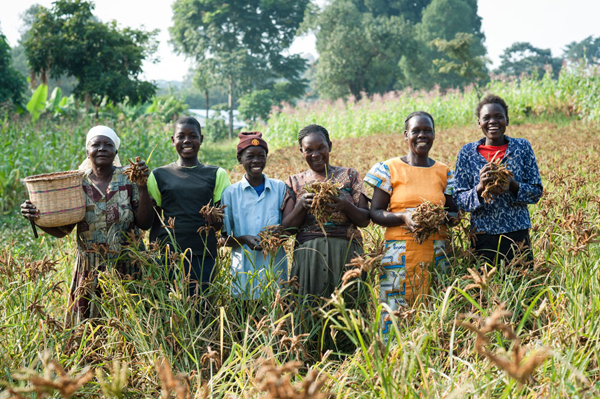 Anne Wafula (second from right) harvests millet on her farm in Kenya with the help of neighbouring women farmers. Photo: Hailey Tucker

Did you know that women make up half of Africa’s agricultural workforce overall, and more than half in several countries? And did you know that these African women, depending on where they’re from, produce up to two-thirds less per unit of land than men?

According to our upcoming joint report with the World Bank’s Gender Innovation Lab, “Levelling the Field: Improving Opportunities for Women Farmers in Africa,” it’s because they don’t benefit equally from things like fertiliser, training or labour.

This gap is making it impossible for African women to become the thriving farmers they need to be to pull themselves out of poverty and give their children a better life.

The UN’s Food and Agriculture Organisation has said that if women worldwide had the same access to productive resources as men, they could boost agricultural production and help lift 100 to 150 million people out of hunger.

Women farmers who do have access to these resources, like Maria, Anne and Liberata whose stories you can read in this post, have found real success. Not only are these women farmers and working mothers, they are community leaders, parents of university students and landowners. They exemplify the promise that Africa’s women farmers can improve the well-being of Africa’s next generation.

Every African woman farmer should have an incredible story like Maria, Anne and Liberata. Although many African policy-makers and donor governments have turned their attention to women farmers, their efforts could be enhanced by a better understanding of the actual challenges these women face and the policies that can be effectively employed to support them. Unfortunately, for too long, they have lacked high-quality, detailed data on agriculture necessary for these insights.

“Leveling the Field,” which is released on 18 March, strives to change this. It brings forward fresh, new evidence measuring the gender gap in African agriculture.

The report profiles six countries: Ethiopia, Malawi, Niger, Nigeria, Tanzania, and Uganda, which together comprise more than 40% of sub-Saharan Africa’s population. It presents the clearest evidence to date of  the breadth and depth of the gender gap in African agriculture. It offers several illuminating findings, which the full report will explore further:

Check back on 18 March for the full report. In the meantime, join us in celebrating International Women’s Day, by sharing the secret of three successful African women farmers.