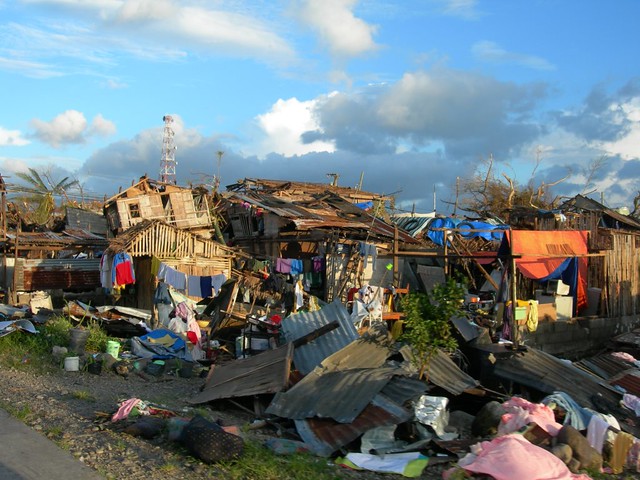 Eight hundred thousand.  That’s the most remarkable number to emerge in reports from the typhoon-hit Philippines in the last few days.  In a story of lives lost, homes destroyed and people uprooted, 800,000 people were reportedly moved by the authorities to safe shelters as the storm approached.

It’s an extraordinary achievement and one that could easily be forgotten.  As that country counts the awful cost of all it has lost, one thing seems clear: it could have been even worse.  The country’s disaster preparedness system saved many lives.

But not every dimension of the disaster could be predicted.  ‘We were ready for the wind, but not the wall of water,’ the president’s adviser said this week.  That wall of water was estimated at 40 feet high. How do you prepare for that?

In my ten years working with Oxfam and Save the Children, who are both playing a big part in the emergency operation in the Philippines right now (in the UK as part of the Disasters Emergencies Committee), I came to realise two things: first, that most disasters involve both predictable and unpredictable elements, and the challenge is to prepare equally for both; and second, that emergency humanitarian response and long-term development work are intimately related.

In one way or another, most development activity seeks to increase people’s resilience in the face of a range of threats, so that when disaster strikes – whether through the loss of a family breadwinner, a failed harvest, an economic recession, an outbreak of conflict or the bite of a mosquito – the damage is limited.

Wealthy countries have all sorts of tools of resilience – from tidal barrages to social security systems.  People in developing countries are not so lucky – but increasingly their investments in resilience, often backed by international aid, are enabling them to weather the storms that block their path to self-sufficiency and prosperity.

Take Ethiopia’s experience of drought and hunger.  As Owen Barder smartly explained in his appearance on BBC Newsnight this week, the devastating impact of the crisis of 1984/5 was in stark contrast to what happened 24 years later, when Ethiopia survived another extreme food crisis even as parts of neighbouring Somalia descended into outright famine.  Ethiopia’s determined building of food stocks, early warning systems, agricultural techniques and programmes to bolster livelihoods meant the difference, for many, between life and death.

Around the world the dominant response to the Philippines disaster has been one of generosity, compassion and a determination to act.  Millions of pounds are pouring into the Disasters Emergencies Committee appeal in the UK, ensuring that British charities can respond quickly and in a coordinated way to the disaster.  And the UK government has been quick to respond too, with more than £20 million committed from Britain’s aid budget at the time of writing.  Across Europe, North America and beyond, citizens and their governments are responding.

Governments, of course, can only do this with the consent of their people, through aid budgets that allow emergency resources to be found quickly.  For those who campaigned successfully for the UK to invest 0.7% of its national income in support to developing countries, Britain’s response to the typhoon is further evidence of the difference those campaigners have made.  A small but vocal minority has argued for the closure of Britain’s aid programme.  If they had won, what would we be saying to the people of the Philippines now?

Even this week, a few are using the Philippines emergency to question the wisdom of long-term development aid.  The argument put forward, for example by Ross Clark in the Times, is that if we could “rein in” spending on long-term development projects, there would be more to spend in humanitarian emergencies.

This is barely more sensible than saying we should cut spending on counter-terrorism in order to spend more clearing up in the aftermath of a suicide attack.

In fact the types of projects Ross Clark labels “of dubious value” are among the very things that are needed to build resilience.  His hit list – small loans to people trying to work their way out of poverty, support to people to help them secure rights to land, promotion of gender equality in Afghanistan and so on – sounds like exactly what we need more of, not less.

Last week I was in Addis Ababa and visited the Ethiopian Commodities Exchange. With its traders in brightly coloured jackets and electronic ticker on the wall, it could be in any great financial city in the world.  International aid supported its creation.  And it has had a profound effect in ensuring Ethiopian coffee farmers can get a fair price and a predictable market for their products, which in turn is transforming the fortunes of the country.

Ethiopia has halved extreme poverty since 1990 and can now see a path to virtually eliminating it altogether.  It’s hard to imagine a better investment than that.

So as we dig deep to help the people of the Philippines, let’s remember that immediate humanitarian response and long-term development investments do not compete with each other.  At their best, they work hand-in-hand.  And the more we can build long-term resilience, the better the chances of weathering the next storm – whatever form it takes.

Support the emergency response in the Philippines by donating to the UK Disasters Emergencies Committee or this list of US/international agencies.

And support the long term resilience of people fighting poverty by joining ONE.