While leaders from the 20 most powerful countries came together in Rome to talk about the biggest challenges facing the world, a troupe of ONE’s Youth Ambassadors took over the streets of Rome outside the summit.

Hanging posters, stencilling the pavements, projecting messages on monuments — basically lighting up the city to get world leaders’ and media attention on their urgent message: the only way to end the global pandemic is to urgently get COVID-19 vaccines to everyone, everywhere.

Inside the summit, discussions were dominated by climate since COP26 followed hot on the heels of this meeting and, to a lesser extent, the pandemic. There were also good measures of Brexit, fish, and submarines poured into the mix, too. *Sigh*

We said we would judge the success of the summit on whether G20 leaders agreed to:

ONE’s take on the summit

The good news is that all G20 leaders supported the target to vaccinate 70% of people in all countries by mid-2022. This is a win. Equity is now baked into their vaccine approach for the next eight months.

BUT given that we’re more than 18 months into the pandemic, we need to see leaders’ battle plans for reaching this target. It’s way overdue. They still haven’t said WHEN they will deliver the vaccine doses that millions of people are still anxiously waiting for.

The G20 did make a smart investment in the global recovery though, promising vulnerable countries a $100 billion shot-in-the-arm by recycling SDRs. And we saw good progress on securing individual country pledges from Canada, Italy, and Spain to address the growing gap between countries’ economic recovery. But we need to make sure leaders deliver this as urgently as the situation requires.

Making a scene in Rome 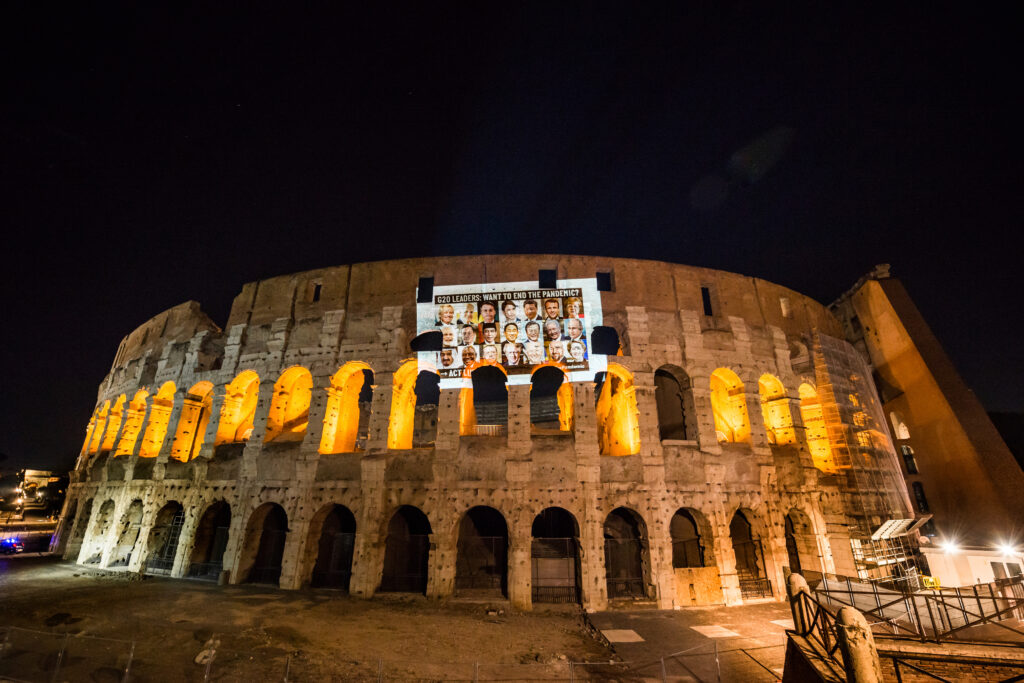 Our young activists lit up the city’s world-famous monuments with important messages for the G20 leaders. Despite heightened security, we were successfully sneaky and managed to get incredible shots of our campaign on the Colosseum and Altare della Patria! 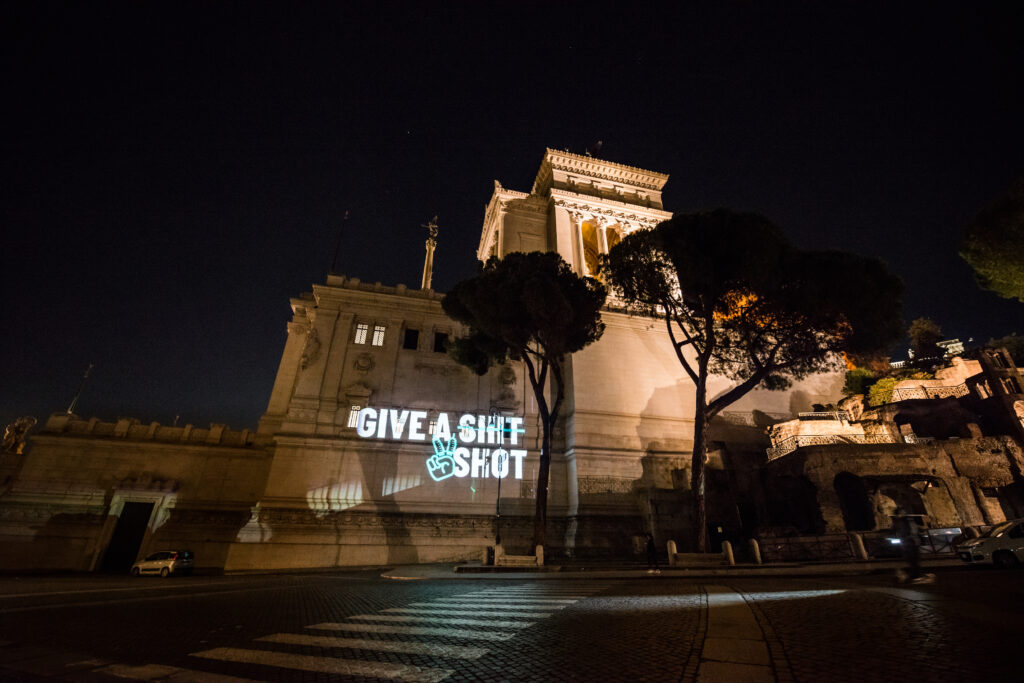 We organised a joint media stunt with Global Citizen. 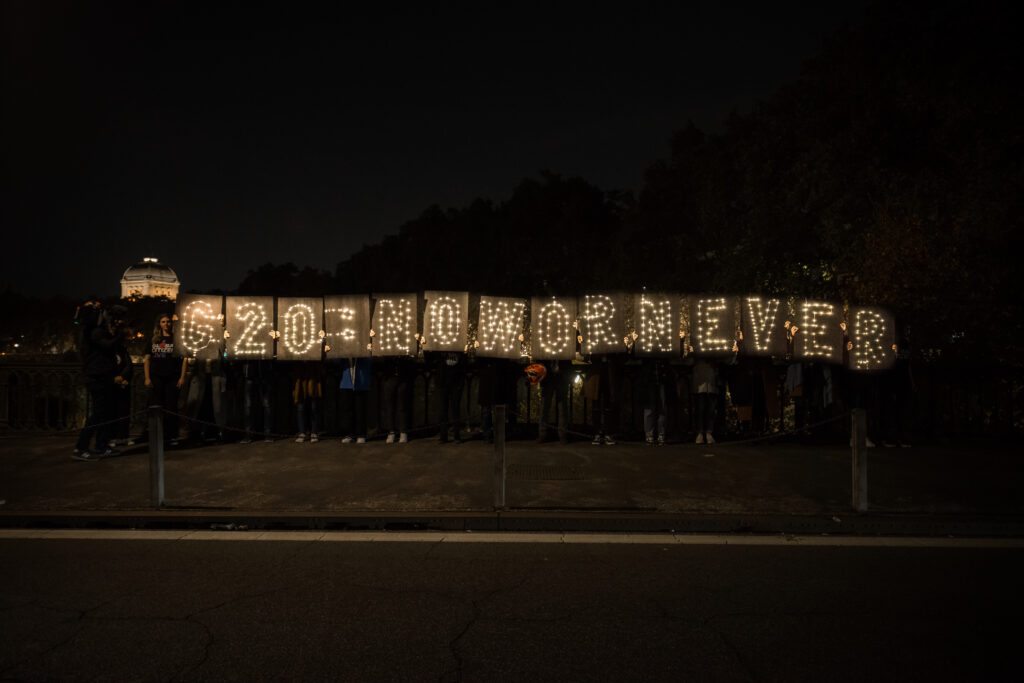 We took out an ad in the Financial Times calling out G20 leaders as they sip their morning coffee!

The pandemic isn’t over. We need #G20 leaders to stop the double-standards that put us all at risk:
💉turn promises into shots in arms, &
📈 kick-start a *global* recovery by recycling SDRs.
Without urgent action the world faces an increasingly man-made crisis. #EndThePandemic pic.twitter.com/qCgF19R7Ze

Thousands of ONE supporters from around the world added a global punch to all the great campaigning on the ground. You shared photos of the stunts on social media, tweeted G20 leaders, and brought in almost 20,000 new signatures to our petition calling for leaders to ensure every country can vaccinate 70% of its citizens in 2022. All of this online and offline pressure contributed to the progress that we saw from the summit. But this fight is far from over.

Emily Wigens, EU Director at the ONE Campaign, said: “The support expressed for the 70 per cent global vaccination goal is a significant step towards beating this virus but reaching this goal will require a huge momentum shift in how wealthy countries are approaching the crisis. At our current pace, it could take over a decade until low-income countries can secure enough vaccines to reach 70 per cent.”

We’re ramping up our campaigning with a global week of action in January to drum up global pressure and media attention and finally end the pandemic everywhere. If you haven’t already, please sign and share our Vaccinate the World petition and stay tuned for more news to come!

Vaccinate the world to end the pandemic once and for all

Vaccinate the world to end the pandemic once and for all

Dear world leaders,
We want the pandemic to end. With COVID-19 still raging globally and millions of people left vulnerable to the virus, inaction is not an option. We are urging you to adopt a global plan to vaccinate 70% of the population globally by September 2022 and end the pandemic everywhere once and for all.