This week we launched the ‘Going for Goal’ report and campaign to vaccinate 5 million kids in 5 years through the GAVI Alliance. In case you haven’t been eating, sleeping, and breathing the topic like me over the last few days, here’s what happened:

The GAVI Alliance held their pre-replenishment meeting, hosted by the European Commission (EC), in Brussels on Tuesday. GAVI’s CEO Seth Berkley highlighted the progress they’ve achieved so far, and announced GAVI’s new targets for the 2016 to 2020 period: raising $7.5 billion from donors to immunise an additional 300 million children and save 5 to 6 million lives.

Everyone in the room acknowledged that securing that financing and delivering those results would be major challenges. But as the GAVI Board Chair Dagfinn Høybråten reminded us it was an attainable goal worth striving for—an incredible chance to provide a healthier future for our children and grandchildren.

The news didn’t stop there. Following a few opening remarks, the EC announced that they would be contributing €25 million per year for the next seven years to GAVI—more than double their current funding levels. Then, Germany announced that they would host GAVI’s final pledging conference, likely in early 2015. On a panel, ONE’s co-founder Jamie Drummond noted that in the past, the country that hosted the conference has played a key role in securing additional financing and political support from others. We hope that Germany will keep up this legacy, especially in a year when it will also host the G7 Summit.

At that same meeting, we launched our new report, “Going for Goal: Immunisation and the Case for GAVI.” With the World Cup kicking off in just a few weeks, we wanted to draw on the buzz around the tournament and relate it back to the important work of GAVI. 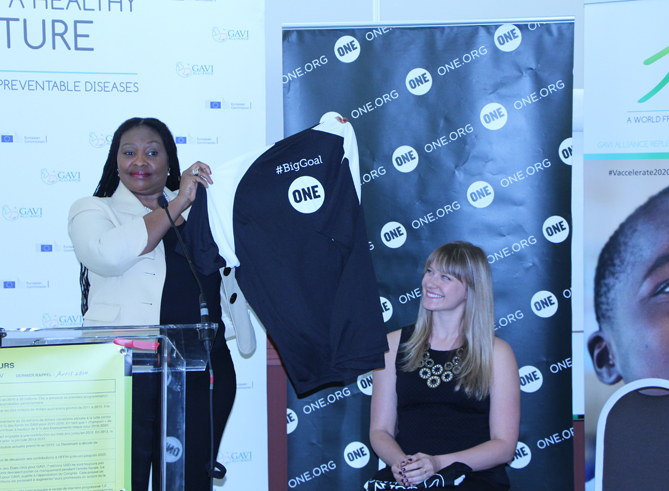 At our launch, we talked about shots (vaccines), saves (6 million lives since 2000), and big goals (GAVI’s fundraising and immunisation targets for the next 5 years). We were thrilled to be joined by Yvonne Chaka Chaka—a legendary South African musician—who was on hand to reflect on our report as well as African countries’ commitment to immunisation.

Once the report was live, we kept up the World Cup spirit by turning a room full of donors, partners, and journalists into “Team GAVI” as they threw custom soccer jerseys on over their business attire and posed behind our playing card frame.

Meanwhile, there was other vaccine news outside of Brussels. Delegates at the World Health Assembly in Geneva discussed the importance of vaccine financing and strategies, and the United States announced that the CIA would no longer use fake vaccination campaigns as a tactic in any future missions.

This came after the US had been criticised for using a fake campaign as part of its effort to capture Osama bin Laden’s DNA—a misguided effort that damaged local citizen’s trust in real vaccine programs. While the move can’t undo the mistrust generated by that tactic a year ago, it will hopefully reset the dynamic for the future.

With so much buzz around vaccines this week, it’s easy to feel like the work ahead of us is already under wraps—but in fact, we will need a sustained campaign over the next few months to help secure GAVI’s big goals and ensure that more children can access the basic vaccines they need.

Help us out by sharing a key fact from our new report with your social networks and by signing our vaccines petition today.