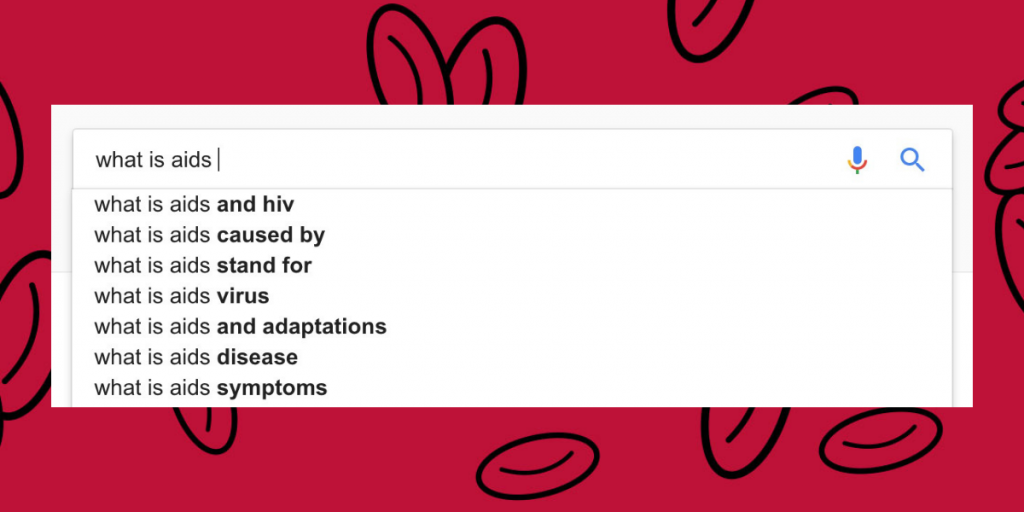 HIV/AIDS is a global health crisis that impacts the lives of millions of people a year, yet still many people don’t know enough about what it is, what it does to the body, and the best ways to prevent it. That’s why we’ve answered your most googled questions about HIV and AIDS, and added a couple extra in for good measure:

How many people alive today are living HIV or AIDS?

Around 37 million people are living with HIV/AIDS. That’s nearly the entire population of Canada.

What is the difference between HIV, AIDS, and HIV/AIDS?

You probably have a general idea what these three terms mean, but there are some key differences between them.

Human Immunodeficiency Virus (HIV) is a virus that weakens the body’s immune system. The virus moves into the body’s “T cells”, which fight off infections, and rearranges the DNA inside them. The infected cell is no longer able to combat diseases, and instead creates more HIV cells.

Acquired Immunodeficiency Syndrome (AIDS) is the most extreme form of HIV infection. HIV becomes AIDS when the body has an extremely low amount of T cells left, greatly weakening the body’s immune system. It can take anywhere from two to fifteen years for untreated HIV to develop into AIDS.

HIV/AIDS is a term to describe the two together. The term also serves as a reminder that HIV always comes first. It is possible to have HIV without developing AIDS, but it’s impossible to contract AIDS without first having HIV.

How did HIV/AIDS start?

HIV didn’t begin in humans. The virus was originally an SIV— Simian Immunodeficiency Virus — that infects chimpanzees, and it is generally believed that the virus crossed over into humans through hunting. While this crossover happened around 1920, the virus wasn’t verified in humans until 1959 in the Democratic Republic of the Congo.

How do you contract HIV/AIDS?

The virus is spread through the exchange of certain kinds of bodily fluids, including blood, breast milk, semen, and vaginal fluids. That means you can’t contract HIV through things like hugging, hand-shaking, kissing, or sharing food and water.

What are the first signs of HIV/AIDS

Since the symptoms of HIV can be mistaken for the flu, or may not be present at all, testing is the only sure way of knowing whether someone has HIV.

If the virus develops into AIDS, the symptoms are more severe. Tuberculosis, meningitis, bacterial infections, and some forms of cancer can all develop due to a weakened immune system.

Is there a cure for HIV/AIDS?

While there is no cure for HIV/AIDS, it is possible to treat. Antiretroviral (ARV) drugs can help control the virus and even prevent transmission to other people. Antiretroviral therapy (ART), the combination of 3 or more ARV drugs, should start as soon as possible after diagnosis to slow the progression of HIV.

Who are the most ‘at risk’ groups for contracting HIV/AIDS

In some hard-hit countries in sub-Saharan Africa, girls and young women are especially vulnerable to HIV/AIDS. Girls make up three out of four new infections among children between the ages of 10 and 19. Young women ages 15 to 24 in the region are also twice as likely to contract HIV than young men the same age.

The most-at-risk groups are men who have sex with men, people who inject drugs, transgender people, and sex workers.

How do you get tested for HIV/AIDS?

How do you prevent HIV/AIDS?

There are lots of different ways to prevent the spread of HIV/AIDS. Prevention, in all its forms, can’t happen without knowledge. Awareness of HIV/AIDS and how it’s contracted is necessary for someone to protect themselves against contracting the virus.

Safe sex practices, including the use of condoms, can prevent transmission during sex. Voluntary medical male circumcision can also reduce the likelihood of contracting the virus by up to about 60%.

ART not only controls the virus in those living with HIV/AIDS, but also prevents HIV-positive people from transmitting the virus to other people. ART coverage for pregnant and breastfeeding women is at an all-time high of 80%, reducing the likelihood of mother-to-child transmission.

ART isn’t the only way to help to prevent transmission. If you are HIV-negative but considered high risk (if you have an HIV-positive partner, for example), you can take pre-exposure prophylaxis (PrEP) before coming in contact with risk factors in order to prevent infection. When taken consistently, PrEP reduces the risk of HIV infection in people who are at high risk by over 90%. PrEP cannot be used by those who are already HIV positive.

Post-exposure prophylaxis (PEP) means taking ARVs within 72 hours of potential exposure to the virus to prevent becoming infected. PEP is not meant for regular use and should only be used in emergency situations.

Which countries have the highest HIV prevalence?

All of the top ten countries with the highest HIV prevalence are in Africa. Eswatini, formerly Swaziland, has the highest prevalence, with over 27% of the adult population living with HIV/AIDS. The virus takes a much larger toll on the female population, with over 35% reporting an HIV-positive status.

Lesotho and Botswana take second and third for highest prevalence. In both countries, over a fifth of the population is HIV-positive. Like in Eswatini, gender inequality increases the prevalence among women in both countries.

How long can people live with HIV/AIDS?

With ART, HIV-positive people can continue to live full, healthy lives. Access to this life-saving medication creates near-normal life expectancy. That’s great news for people who have access to ART, but this isn’t the case for everyone.

Last year, almost a million people died from AIDS-related causes. That’s 2,500 people every day, nearly two every minute. This means that the life expectancy of a person with HIV depends on whether they are able to access and afford treatment.

There’s no doubt about it: AIDS is still a crisis. The numbers may be intimidating, but this fight is far from lost. We have the knowledge and resources to help those who are HIV-positive, while also preventing more people from contracting the virus. By increasing access to ART, education, and health services, we can create a world free of HIV/AIDS.

To win the fight against AIDS, we need you. This World AIDS Day, ONE members are turning our outrage into action and putting our leaders on notice – add your voice today!