On Friday I went to Jersey to hand-in our petition to Cathy Keir in the Chief Minister’s Office, asking them to stop vulture funds using Jersey’s courts to prey on poor countries. Along with the Jubilee Debt Campaign we’ve been campaigning hard to see Jersey bring in the UK’s Vulture Funds law, and in a week’s time the Democratic Republic of Congo’s appeal to the Privy Council will be heard – with things hanging in the balance as to whether they’ll have to pay $100m to vulture fund FG Hemisphere. 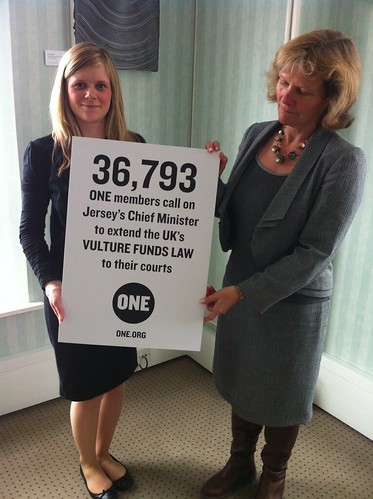 After having much of their debt cancelled by the IMF and World Bank just last year, the impact that this will have on the DRC, and the people living in extreme poverty, is just unimaginable. The Chief Minister’s team confirmed that legislation is on the way, but there’s no way that it will now be in place in time to counter this case. We’ll be closely watching the outcome of the DRC’s appeal next Monday, and may have to call on you again to take action. Let’s hope this is a victory for right over wrong.

Your voices have been heard by Jersey’s Chief Minister’s office.

If you want to add your voice you can still sign the petition here.