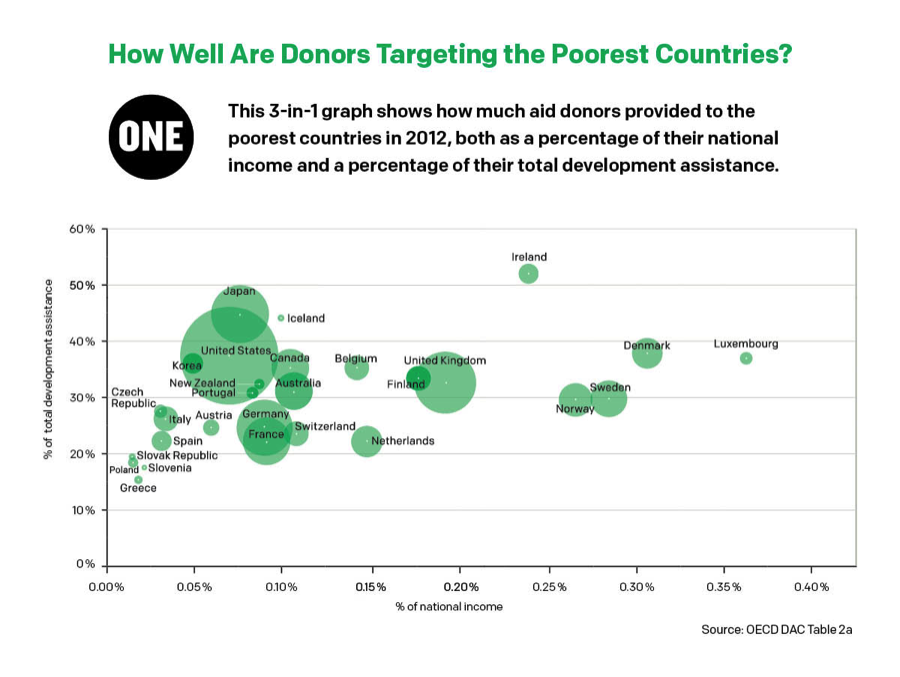 The latest projections of how much development assistance wealthy countries plan to provide in the coming years has just been just released, and the news isn’t good.

Projections reveal that aid isn’t programmed to go where it is most needed.

In most developing countries, government revenues have significantly increased and largely outgrown external financial flows, such as foreign direct investments or development assistance. In these countries, ensuring that public revenues are effectively spent on key sectors, such as health or education, has now become the most significant tool to tackle poverty.

ONE’s 2014 DATA Report found that the median government spending across sub-Saharan African countries was just $413 dollar per person in 2012. This compares to $15,000 in developed countries. In Liberia, which is now facing a devastating Ebola outbreak, tax revenues amounted to just $132 per person in 2012 and development assistance equated to 1.4 times the government’s own revenues. In those countries, aid truly is a life-saver.

Yet Official Development Assistance growth in least developed countries has been slowing down over the past three years and the latest aid projections published last week show that this trend will continue. Aid to the poorest and most vulnerable countries is projected to decrease by 4% from 2014 to 2017. Two thirds of sub-Saharan Africa will receive less aid in 2017 than 2014.

The largest aid increases are projected for middle-income countries and it is likely that much of this will be in the form of loans. Increasingly more aid has been provided in the form of soft loans. This type of aid plays an important role in development assistance. However ONE’s DATA Report found that the rules governing aid lending are highly problematic and can create perverse incentives for donors to choose loans over grants even when it is inappropriate.

Last July, in Cotonou, least developed countries urged donors to channel 50% of their total aid to them. ONE’s 2014 DATA Report found that donor countries are failing to prioritise the poorest countries with less than a third of their aid actually going to these countries. All donors but one, Ireland, are not directing the majority of their aid to those most in need.

Next year will be critical for the people living in the poorest countries and struggling to survive, as the world will agree on a new set of sustainable development goals and a strategy to finance them. Listening to their calls and ensuring that half of all development assistance reaches these people should be one of the main priorities on donors’ agenda beyond 2015.