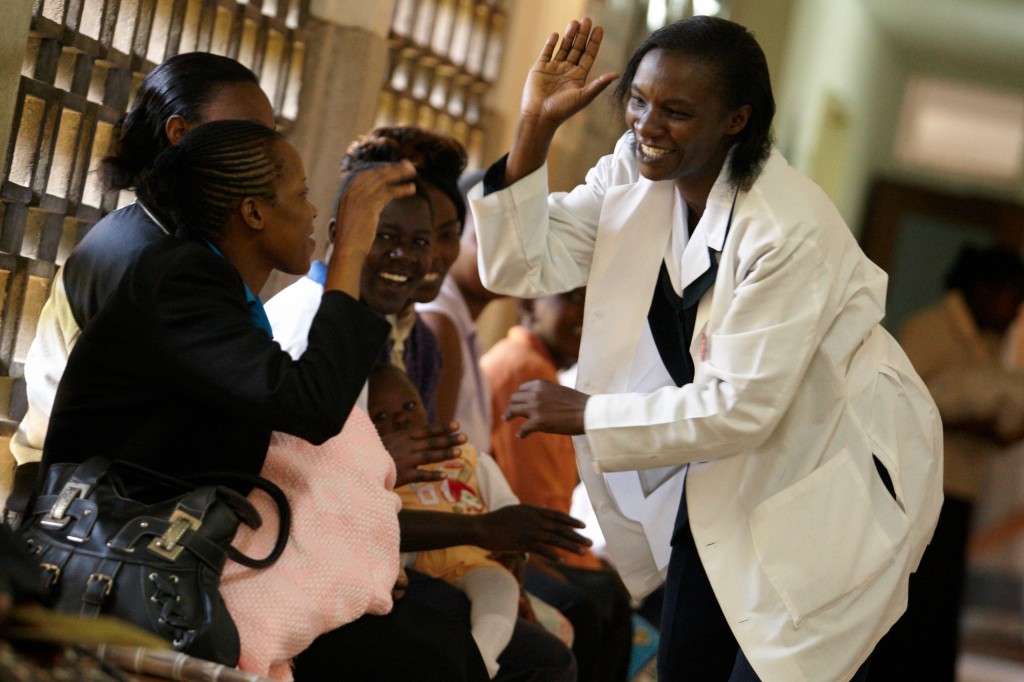 Community Health Worker Pauline with patients at a health centre in Kenya. Photo: ONE

The UK gives a large part of its development assistance to poor countries through international organisations (often called ‘multilateral organisations’), like the United Nations, the European Union or the World Bank.

Supporting these organisations is an essential part of the Department for International Development (DFID) strategy as they are able to deliver aid on a larger scale, can operate across borders, often have legitimacy to work in politically sensitive contexts where national governments are not always welcome, and allows the UK to reach poor countries where it does not have its own programme.  In 2012, DFID gave more than £3 billion through multilateral organisations, which made up around 40% of DFID’s budget.

In 2011, in order to ensure UK taxpayers’ money was effectively spent, DFID made an assessment of the value for money of the 43 multilateral organisations that it funds: the Multilateral Aid Review (MAR).

Last week, less than two years later, DFID published an Update of the MAR (MAR-U) scrutinising the progress that 37 of these organisations have made on the areas of reform that DFID had originally recommended.

The MAR-U shows that giving aid through multilateral organisations is a good investment for UK taxpayers’ money and has helped DFID to reach effectively the world’s poorest.  It found that all 37 organisations had made some progress in just 18 months since the original assessment was published in 2011.

Yesterday DFID announced its pledge over the next 3 years for the International Development Association (IDA), the World Bank’s fund that specifically targets the poorest countries.

The MAR had already found that IDA was ‘good value for money for UK aid’ in 2011. The MAR-U published last week gave IDA a score of 3/4 meaning that IDA’s reforms achieved to date meet expectations by satisfactorily addressing reform priorities. It found that the World Bank has taken reform seriously and has made itself a more agile, efficient organisation.

For the last couple of years, ONE members have been asking the UK government, along with many others, to make a bigger contribution to the Global Fund to Fight AIDS, TB and Malaria.

The Global Fund was created in 2002 to dramatically increase resources for the fight against these three killer diseases. Last September, ONE delivered a 150,000 name petition to the Secretary of State for International Development, Justine Greening. Two weeks later the British government announced its decision to pledge up to £1bn to the Global Fund to Fight AIDS, TB and Malaria in 2014-2016.

The UK pledge could allow the Global Fund to deliver life-saving AIDS treatment to more than 750,000 people and protect 33 million families from malaria. As with IDA, the MAR-U also gave the Global Fund a score of 3/4 and concluded that the Global Fund has made significant reforms and has showed a strong level of commitment to improvements.

As the UK meets its longstanding commitment of giving 0.7% of its GNI as development aid for the first time this year, it is very positive to see that the UK aid is channelled through organisations that effectively reach the world’s poorest.  It will transform lives.

However, while it is very encouraging to see the progress that has been achieved in just 18 months, the MAR-U also show that there is disappointing progress on some important areas such as empowering girls and women, increasing transparency and accountability, and controlling administration costs. As the UK maintains ODA levels at 0.7% of its GNI over the coming years, it must keep pushing multilateral organisations it funds to carry the necessary reforms to be the most efficient and most effective possible.