Today, the Financial Times published an article based on a draft G8 communiqué obtained by the newspaper . The draft communiqué for the Hokkaido Summit mentions the development assistance goals for Africa made in Gleneagles in 2005, but drops mention of the specific target, approximately $25 billion. The communiqué recommits the G8 to working towards the goal of universal access to HIV/AIDS prevention, treatment and care, but drops mention of doing so by the original promised date of 2010.

ONE just published its 2008 DATA Report that monitors G8 commitments to Africa from Gleneagles. One of our headline findings is that the G8 have only delivered 14% of their promised development assistance increases. The G8 committed to $21.8 billion (the $25b was an approximation that was made before clarifications by the countries), but now, half way to the 2010 target date, they have only collectively delivered $3 billion of this promise. On AIDS: despite great progress (nearly 30% of Africans in need of HIV/AIDS treatment now are receiving them), there are still nearly 5 million people on the continent that are in need of treatment in order to stay alive.

No wonder then that the G8 wants to hide from their earlier promises. This is hard work. Their slow delivery until now has made the road to delivering the promises a bit steeper, but these are the wealthiest and most powerful nations in the world’s history. The G8 as a whole is spending 0.07% of their GNI on development assistance to sub-Saharan Africa. This is NOT a big budget item. If the G8 want to honor their commitment to Africa, they can. The road to doing so is shown here in this. 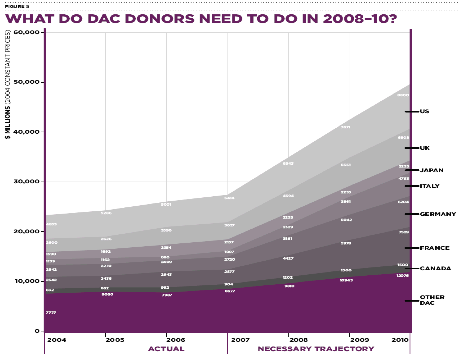 The G8 will be tackling a host of issues critical to all of us: a global financial crisis, climate change, the food crisis, an economic downturn, and the role the G8 will play in the growth of Africa. On all these issues, the G8’s ability to keep their promises will determine whether they will be a relevant and trustworthy body in the 21st century.

The FT reported that what they obtained is a draft communiqué. Rather than backtracking, the G8 must at the very least include a recommitment to their promises to Africa. What they should be doing is taking a step forward by setting annual timetables for meeting their overall development assistance commitments and specifying a timetable for meeting their health commitments from the Heiligendamm Summit. One week from today, the G8 Summit starts in Japan. We will find out shortly if the G8 will stand by their word.