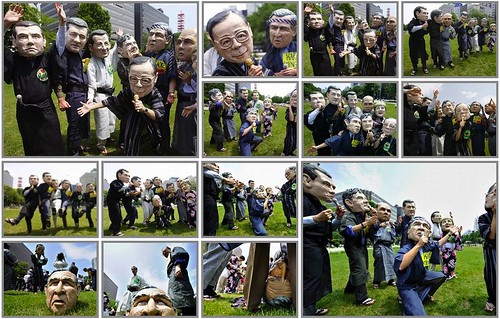 Ahead of the 2008 G8 Summit which starts tomorrow, the leaders of Canada, Italy, Russia and U.S. all arrived today in the northern island of Hokkaido. But they weren’t the only ones. Hokkaido is hosting NGOs and civil society organizations that have been gathering in the past couple of days from all over the world. Yesterday, some of these NGOs and several thousand citizens staged a demonstration march in the center of Sapporo, the capital city of Hokkaido, to promote their hopes for world peace and greater equality. Check out the people from Oxfam Japan above, wearing large G8-leader masks and yukatas (cotton kimonos) requesting the G8 nations to tackle international problems in earnest. 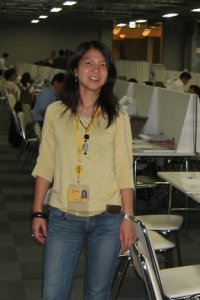 I also landed in Hokkaido today, and headed straight to the International Media Centre (IMC) of the G8 Summit. The IMC is in Rusutu, a good two hours drive away from the main airport in Hokkaido. I knew I was close when I started seeing rows of security vans and guards in the middle of Japanese countryside. Apparently Japan has spent $280m on security for the G8… Our team set ourselves up in the main hall of the IMC. The place was only 75% full, but during the course of the day and evening, more and more journalists, camera/video men, and NGO guys like us arrived and catching up with each other in their different languages.

The big interest in the IMC today, at least for the Japanese and American journalists, was the bilateral meeting between Prime Minister Fukuda and President Bush. We were glued to the small TV screen listening to the live coverage of the press conference, being held at Toyako. I was happy to hear President Bush passionately say that there is too much suffering in Africa and that G8 must take firm actions to help Africa fight HIV/AIDS and other illnesses. I do hope that he and other G8 leaders follow through with this and make a firm, deliverable commitment this year… Well, I’ll certainly be keeping a close eye on it in the days to come.