This post was originally written by Emma Batha. Editing by Claire Cozens for Thomson Reuters Foundation

The Zambian slum of Chibolya is notorious for crime and drugs, but acrobat Gift Chansa wants to get the township’s youth hooked on a very different high – circus.

Chansa is co-founder of Circus Zambia, the country’s first social circus, which provides disadvantaged young people with education and job opportunities while teaching them everything from unicycling and fire-eating to tumbling and juggling.

The circus also runs a “Clowns for Condoms” project to help tackle the HIV/AIDS epidemic in Zambia, where myths persist that the disease is linked to witchcraft.

Set up in 2015, Circus Zambia has already gained international attention, performing in Britain, the United States, Japan, Belgium, the Netherlands and across Africa.

Chansa grew up in Chibolya, a poor Lusaka township which one Zambian journalist recently likened to Sodom and Gomorrah.

It is an image the charismatic acrobat is keen to dispel. He says young people are discriminated against and refused jobs simply for mentioning they come from Chibolya.

“When you grow up there, no one takes you seriously,” Chansa told the Thomson Reuters Foundation during a tour of Britain this month.

“So we wanted to say, ‘Look, not everybody is a criminal. There are young people coming up that are knowledgeable … young people that are ready to take over the world’. And that’s why we created the platform Circus Zambia.”

While in London, Chansa met Queen Elizabeth to receive the Queen’s Young Leader Award which recognises “exceptional people” from across the Commonwealth who are transforming lives in their communities and beyond.

The eldest of six children, Chansa never knew his father. He was raised by his mother and grandparents, who provided him with his distinctive name, calling him a “a gift to the family”.

There were no parks, libraries or youth centres in the township so Chansa and his friends, including Circus Zambia co-founder Benard Kaumba, amused themselves with acrobatic contests in the street.

In 2014, Chansa and Kaumba were invited to train at a circus school in northern China under a scheme sponsored by Beijing after their talents were spotted by a Chinese circus troupe visiting Lusaka.

Chansa, 27, and Kaumba, 28, say if they had not discovered circus they could have easily been dragged into a world of drink and drugs.

“Things were hard for me. Circus kept me busy and helped me stay away from bad influences,” said Kaumba, dressed in his brightly coloured African-print tumbling costume.

“When you go back and see your friends, you see their life is just drugs,” he added, reeling off a list of illicit substances available on the streets of Chibolya.

Today the circus boasts 15 performers and works with 80 children. It has new premises which include a library, class room and training room and is raising money to finish building a theatre. 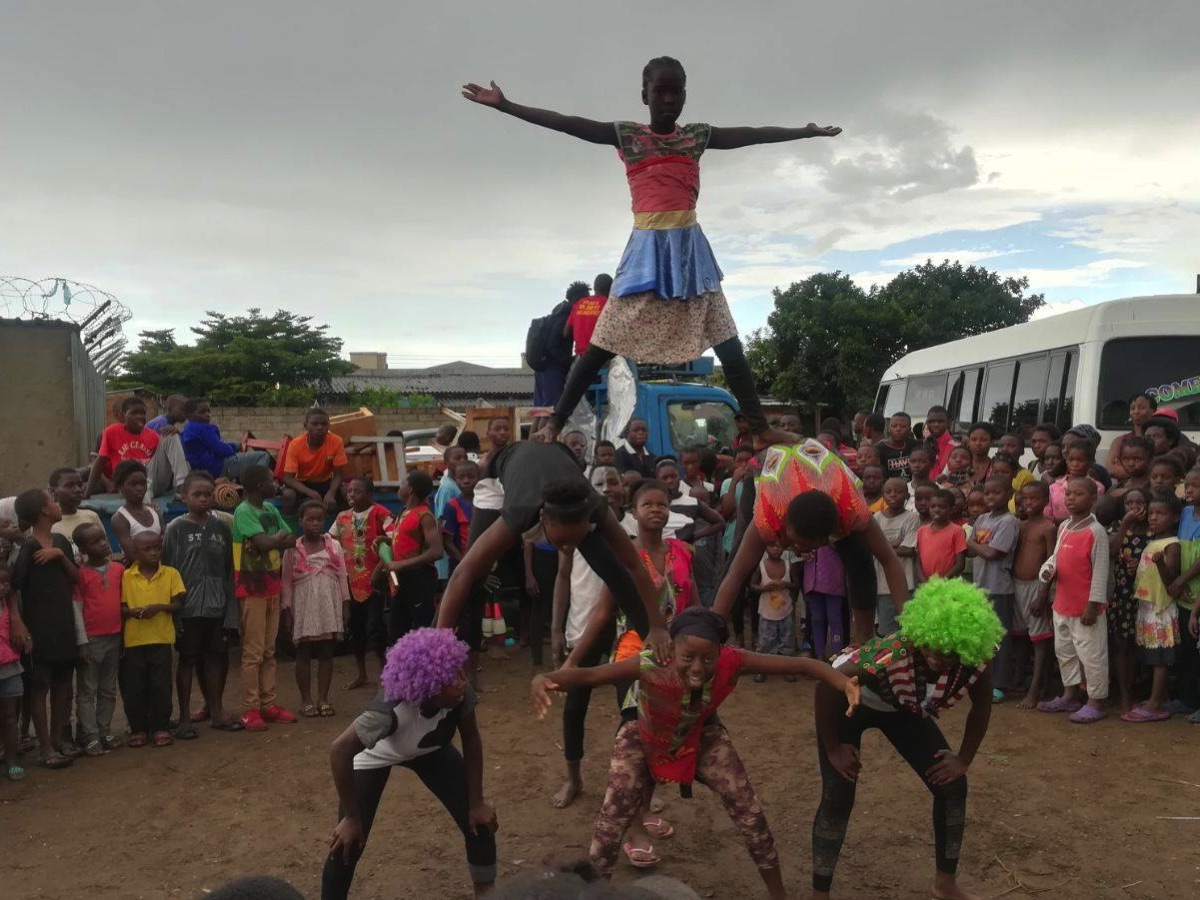 Circus Zambia is part of a growing global movement of social circuses including Circus Kathmandu in Nepal, created by survivors of trafficking, and Circolombia in Colombia, which works with children from areas where gangs and drugs are rife.

Social circuses also use entertainment as a tool to engage communities on social or health issues such as alcohol abuse or HIV/AIDS.

Two years ago, Chansa watched a young friend die of HIV/AIDS after he refused medicine, believing he had been cursed. Chansa is now determined to help tackle widespread ignorance around an epidemic that has left one in six people in Lusaka HIV positive.

“In Zambia it’s hard to talk about sex, nobody talks about sex,” said Chansa, who believes the HIV rate is even higher in Chibolya.

“A lot of people will say (HIV/AIDS) is witchcraft, it’s juju, and then they won’t take their medicine – and then they die. We want to say it’s not juju.”

“It’s easy to attract people when you go into the community and people see you dressed as clowns,” he said. “You can (talk to) them just there and then, so that’s why we use circus.”

Chansa wants to expand Circus Zambia to other regions and ensure it has a secure future for the next generation of performers.

He is also dreaming big for his own future.

“I want to be a politician,” Chansa said. “That’s my ambition – because people don’t understand what young people are going through, especially in communities like mine.”