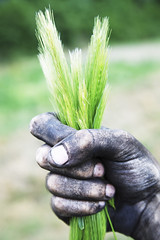 The Washington Post today reports that a new version of an old fungus is ravaging Kenya’s wheat fields and threatens to spread beyond Africa. Stem rust was thought to have been defeated 50 years ago, but a virulent, more resistant version is now posing a major problem for Kenya’s most fertile wheat fields, and could soon become a widespread crisis.

As farmers watch their crops – and livelihoods – wither, this outbreak yet again underscores the immense importance in supporting agricultural initiatives and research innovation in the developing world.

Nobel Peace laureate Norman Borlaug, the world’s leading authority on the disease, said that once established, stem rust can explode to crisis proportions within a year under certain weather conditions.

“This is a dangerous problem because a good share of the world’s area sown to wheat is susceptible to it,” Borlaug said. “It has immense destructive potential.”

Coming on the heels of grain scarcity and food riots last year, the budding epidemic exposes the fragility of the food supply in poor countries. It is also a reminder of how vulnerable the ever-growing global population is to the pathogens that inevitably surface somewhere on the planet.