In Tanzania, women make up 75% of farmers. Despite this they are often denied access to resources that could help them thrive – struggling to get loans that could be used to buy seeds and equipment, and getting turned away when they try to buy land in their own name.

To help highlight such inequalities, Oxfam have teamed up with a Tanzanian TV station to create Mama Shujaa wa Chakula (Female Food Heroes) — a ‘reality’ show that aims to educate participants and audience alike.

The format of the show sees the 19 contestants spend three weeks performing domestic and agricultural tasks whilst being filmed ‘Big Brother’ style. The women learn about leadership and finance as well as sharing knowledge and skills with each other and attending workshops on political activism and gender equality.

The added bonus is that the audience learns too. According to Oxfam, the show reaches 37 million viewers and radio listeners across Tanzania, Kenya, Rwanda, Burundi, and Uganda.

“We’re creating a platform through which women tell their own story, communicate their own ideas,” says Marc Wegerif, who helped develop the initiative while working for Oxfam in East Africa. “The finalists are important ambassadors when they go back to their villages.”

By showcasing competent female breadwinners, the producers hope Female Food Heroes can raise the profile of women farmers and help the nation to see that they are vital to the economy. It is no secret that women are the key to ending poverty!

Female Food Heroes takes advantage of its audience to raise awareness about the issues that affect these women and their communities every day – the economic, cultural and institutional issues that limit opportunities and resources for the women of Tanzania compared to their male counterparts.

Despite their dominance in the sector, female farmers face unique obstacles. Under the Land Act of 1999, men and women technically have equal rights to land ownership but due to customary inheritance laws, land tends to pass from father to son, and even married women can be blocked from leasing land and widows can be evicted from their own property.

Female Food Heroes is an explicit effort to raise awareness about these issues.

We’re saying to the audience and to decision-makers: Look what they can do, and imagine what they could do with more support.

Obviously it will take more than a TV show to improve the conditions for female farmers in Africa and the attitudes that persist in holding them back.

A reality show can only do so much to change ingrained traditions in rural communities, particularly when just 3% of rural Tanzanians have access to electricity, let alone a television. It’s going to take a lot of action from African governments to really turn the situation around for female farmers on a large scale. 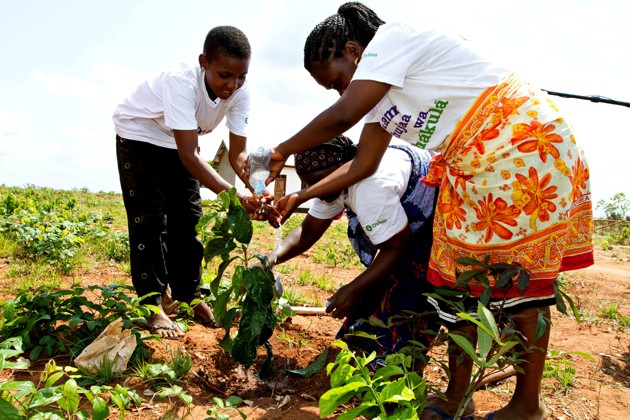 Read more about ways to ‘Level the Field’ for female farmers in our policy report which provides detailed analysis of the factors that account for the gender gap and suggests ways of improving the situation.

You can also read about some successful female farmers who have been given opportunities to flourish in their fields (pun intended.)

Take action: Sign our Poverty is Sexist petition and tell world leaders to unlock the full potential of female farmers – and all girls and women – everywhere.